Mesiyieki. We must confess we really struggled to pronounce it. The sweet boy kept trying to spell it for us and even that in and of itself is complicated! It seems to be pronounced Mmm-si-yeki or something of the sort. And do you know what it mean… Read more

Mesiyieki. We must confess we really struggled to pronounce it. The sweet boy kept trying to spell it for us and even that in and of itself is complicated! It seems to be pronounced Mmm-si-yeki or something of the sort. And do you know what it means? “Nothing can harm him,” Eric, Mesiyieki’s dad, told us.

“He was born like that,” Eric told us. Mesiyieki’s condition has been since birth. His family figured that there was a complication in the womb between him and his umbilical cord. We’re not sure of some of the inbetweens with doctors and medical treatment, but what we know is that Mesiyieki has lived like this for his whole life. “He’s able to move. Even running… he plays!” Eric told us.

We’re grateful that he’s adjusted and doing well. But we’re also grateful that soon, he’ll be able to do even more than he’s able to right now. God has kept Mesiyieki safe just like his name implies, and we’re trusting that even as Mesiyikei goes for his surgery, ‘nothing can harm him.’ He’s in God’s hands and we know that is the safest place to be!

Mesiyieki paid us a visit and an x-ray was taken to take a closer look at the progress being made with his frame. The doctors examined his x-rays and are happy with the correction achieved. Mesiyieki has an infection at the points where the frame comes in contact with his skin, but it is being managed through medication. Please pray for his infection to be gone at his next appointment! We will see him again when he comes back for a review. 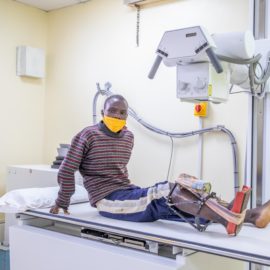 Mesiyieki walked for a few minutes today and is getting used to stepping down. He told us that he is only a bit uncomfortable right now. We found him resting after a successful session walking around the hospital. 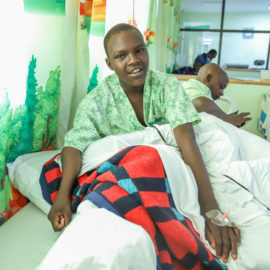 Another day, and another milestone for Mesiyieki to thank God for. Mesiyieki's foot brace helps his leg remain in a position that allows him to step down properly. We are happy that he is gaining the confidence to put his foot down. Please keep Meiyieki in your prayers to encourage him in his recovery. 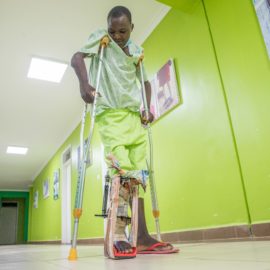 Hazel, a physiotherapist at CURE Kenya, spent some time today helping Mesiyieki with exercises to help him move his foot. As you can see, Mesiyieki was a bit uncomfortable because it was a whole new sensation after his foot had stayed in one position for a long time. Mesiyieki is recovering well. We have nicknamed him ‘Simba’ because of his courage and endurance. 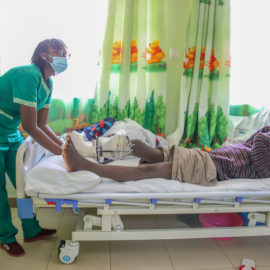 Mesiyieki is back! This morning he asked us to have some of the rubber stoppers on his crutches replaced because they are worn out. Without them, there is a greater risk of sliding and falling when he uses them on slippery surfaces. Mesiyieki came back to have part of his frame removed so he can now begin putting his foot down. He is super impressed at the change he can already see. “I am now taller than when we first met!” he excitedly told us. 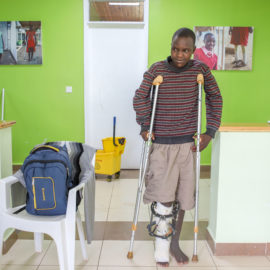 One of the things that Mesiyieki is looking forward to doing when he is healed is playing football. Because he cannot do that at the moment, he is watching how other people play so he can learn the tricks. His favourite player is Christiano Ronaldo. Mesiyieki says he admires his sportsmanship and work ethic. We had a debate that will probably never end about who is better between Ronaldo and Messi. Mesiyieki really enjoyed it! 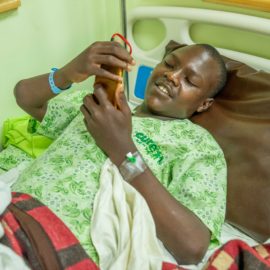 Mesiyieki is such a warrior! He is in some post-op discomfort, but he's not a fan of medicine so he's chosen to push through it! Despite this, Mesiyieki can still afford to smile. We thank God for his healing process! 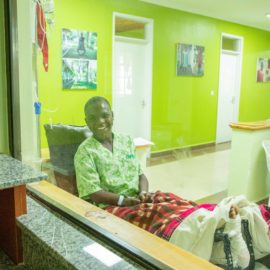 We spent our morning reading Mesiyieki your get well messages. He was super impressed to discover that there are so many people reading his story and are on this journey with him through prayer. “I wish I could see their pictures the way they can see mine so when I pray too. It is for friends who are familiar!” Mesiyieki told us. Mesiyieki is doing well after his surgery yesterday and we praise the Lord for a successful procedure. 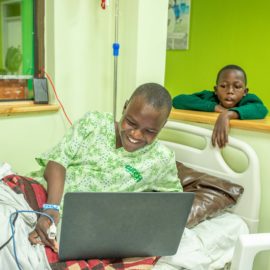 Mesiyieki needs this next procedure to lengthen his right leg which will reduce the difference between his left and right leg. The doctors are going to use a skill they recently acquired where they are going to install a TSF (Taylor Spatial Frame) frame on Mesiyieki's leg which will slowly help it grow. It is a process that will take time so Mesiyieki is going to need a lot of prayers! 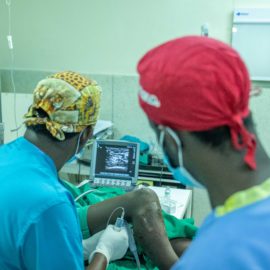 Our friend Mesiyieki is back for another procedure. He was so happy to see us this morning. “I was wondering where my friend went, because I came and couldn’t see him!” Mesiyieki said about Storyteller Elvis. Please pray for his procedure which we will tell you all about. 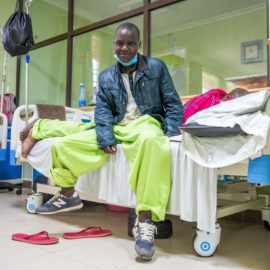 Mesiyieki is back at CURE Kenya to have an operation on his left leg. Our friend was so happy to see us. He went on and on about what he had been up to since the last time we saw him. He told us that they had exams in school which he passed very well and his dad “was very happy!” We thank God for all the good things happening to our friend and we are praying for one more good thing to happen when he gets surgery! 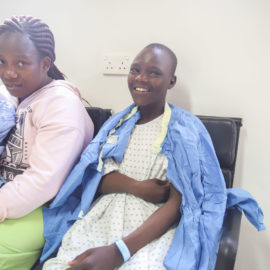 Dr. Lunar saw Mesiyieki today. His leg isn’t yet straight, so she needed an x-ray to check what's going on. Unfortunately, our man is going to need another surgery. And although we say ‘unfortunately’, it is also fortunate -- because we want the very best for Mesiyieki and we’re trying to ensure he gets the very best care. Pray for him as he waits for his next surgery! 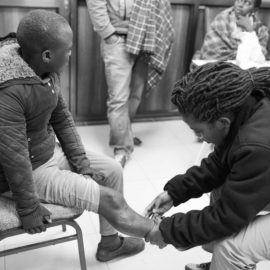 The rainy season has started in most parts of Kenya including Kijabe, where CURE is located. This is why it took Mesiyeki and his guardians a long time to get to CURE Kenya as the terrain in their home has been mostly affected by the recent rains. He is here for review and will have his cast taken off, an x-ray taken and he will spend some time with the doctor to find out how he is doing in terms of healing after his pins were removed the last time he was here. We will see him in six weeks time. 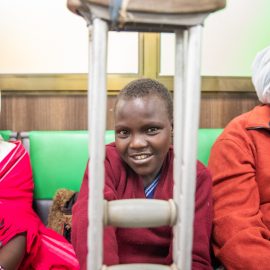 Mesiyieki was ‘very angry’ when he came to CURE Kenya today for clinic. He was supposed to come a week ago but the date was changed because of some logistics back at home. He had really looked forward to having his cast removed. However, since he got here today he was able to cheer up. He was shocked to learn that we still remembered his name and even made a joke about this in his native language. Mesiyieki had his cast removed and his pins were also taken out. He was disappointed that he still has to wear another cast for another 4-6 weeks but his guardian was able to encourage him. His guardian told us that Mesiyieki had been talking about how he can’t wait to play soccer when he is healed. Friends please pray for Mesiyieki’s dream to come true when he is done with his correction process! 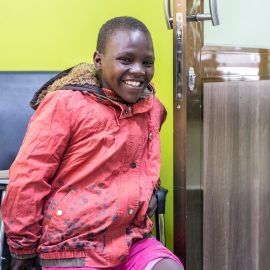 “Nine,” that is the number of siblings that Mesiyieki told us he has. That’s a fun number! Unfortunately for Mesiyieki, he seems to only have one red car to take home to play with his siblings. Thankfully though -- at least he’s got one! We worked together with the spiritual department to give out gifts to our kiddos on Tuesday -- some of which were from a sweet girl named Maddie from the States who put together care packages for our kiddos. Now when Mesiyieki goes home tomorrow, he’ll be able to share goodies with his siblings! 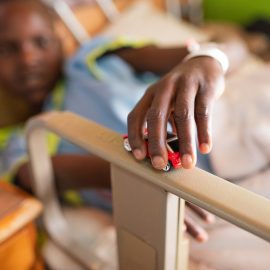 We missed Mesiyieki’s walking this morning, but thankfully -- he didn’t! Someone from the physio team worked with him, then let Mesiyieki’s dad take over. The drainage from his leg is better and the device that was helping deal with it has been removed. After a walk about the ward, Mesiyieki may be tired, but his dad told us that the walking ‘wasn’t bad’ so all the walking was worth the potential tired! We’re hoping tomorrow will be Mesiyieki’s home-going day! 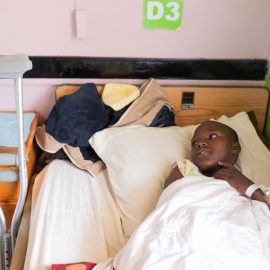 This smile came right about the time we pointed a camera at Mesiyieki’s face. Even the day after his surgery, he’s calm and doing okay. There’s some drainage coming from his leg, but sometimes this happens and it’s being taken care of by our fabulous CURE Kenya staff. On top of being in our capable staff’s hands, we know our guy is also in God’s hands and we’re grateful for all that’s taken place for him to heal already! Pray for a smooth go of things from here on out! 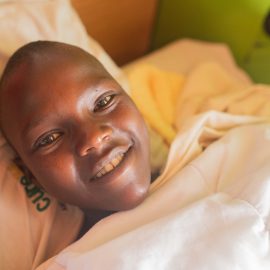 As Mesiyieki and John, an anesthetist at CURE Kenya, were walking down the corridor into the operating room, John asked Mesiyieki how to pronounce his name. The boy is very shy so he took a moment to respond. After telling John how to say his first name, John decided to call him by his second which is easier to pronounce. They however became friends and John took the young man through the process before putting him to sleep. After a successful procedure Mesiyieki now needs to rest and recover in the comfort of his bed. Thank you so much for your continued support in prayer and in kind! 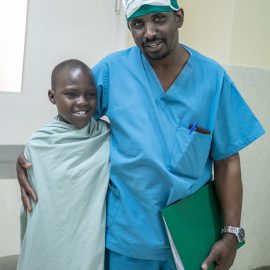 He laughed, and the rest was history! Mesiyieki is a cool guy. He doesn’t laugh too much, but when he did this morning, his face lit up! He loves playing and spent time doing so in our playroom today as he waited for surgery on his leg. We’re hoping his day in theatre will be tomorrow, but in the meantime, all is well when there’s a playroom to play in! 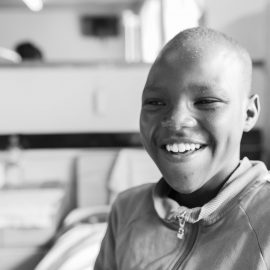 Send a Message to Mesiyieki

We'll deliver your message to Mesiyieki as soon as we see him. View get well messages

There are currently 276 different people who are a part of Mesiyieki's support community. What about you?

This is Mesiyieki's 1st procedure.

Mesiyieki has had 1 procedure at CURE Kenya. Below are the before and after photos for each procedure. 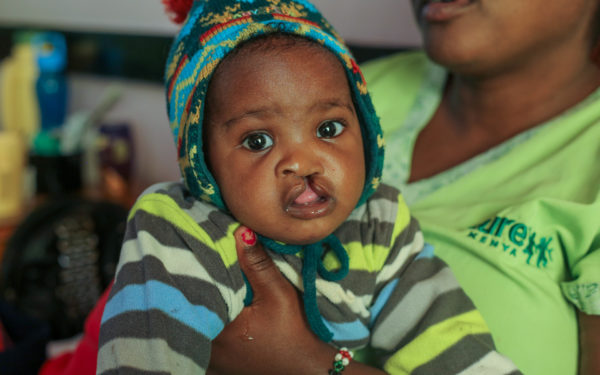 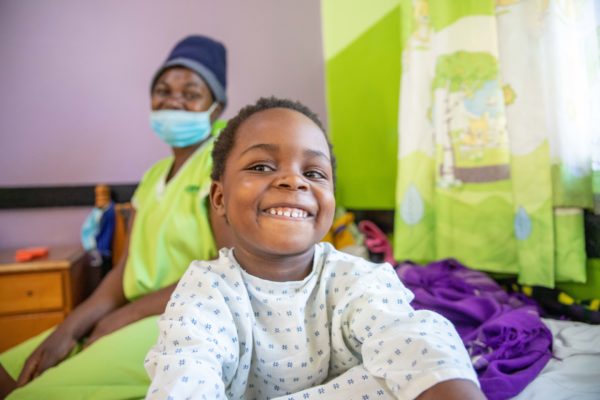 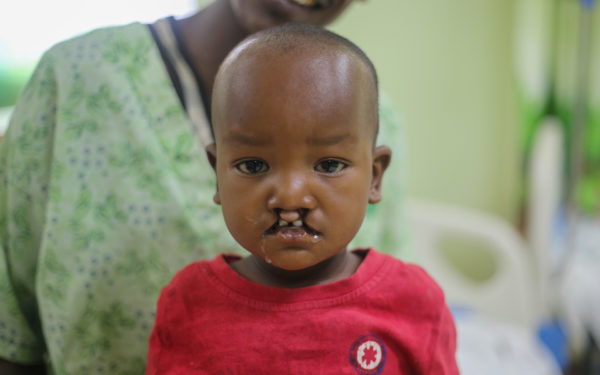 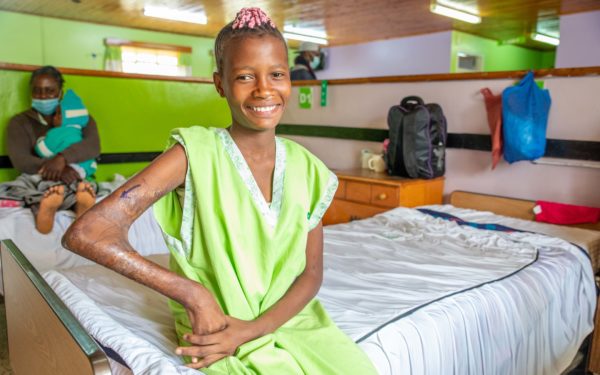 We're sending your message for Mesiyieki to CURE Kenya.

Every month, be a Hero to a child at a CURE Hospital, beginning with Mesiyieki. Real-time updates will let you see the impact of your giving monthly!

Your generosity will provide major underwriting for a surgery at CURE Kenya while you receive real-time updates on Mesiyieki.