“I want to play football again,” says eight-year-old Chafiou. “[Since the accident] I just sit around.”

It happened about a year ago - Chafiou was cooking, and when he lifted a pot of boiling water off the fire, his pants caught fir… Read more

“I want to play football again,” says eight-year-old Chafiou. “[Since the accident] I just sit around.”

It happened about a year ago - Chafiou was cooking, and when he lifted a pot of boiling water off the fire, his pants caught fire and were engulfed in flames. His upper legs and the backs of his knees were badly burned, and while they did heal, they did so badly - the skin contracted, so his knees are now permanently bent and his hip joints are nearly locked in place - he doesn’t walk anymore, he shuffles.

Ffortunately a visiter in Chafiou’s village told Chafiou's family about CURE Niger - “We’re so happy and grateful to be here,” said his great aunt, who’s taking care of him while he gets surgery. “We’re so glad he’s getting help.”

The year has not been easy for Chafiou, “He’s suffered a lot of pain,” says CURE Niger surgeon Dr. Anthony - but with an operation to release the burns, and with physical therapy to help restore mobility, Chafiou should be able to walk again, maybe even pain-free. Hopefully soon he can play football too!

Chafiou is finally out of the ward and into our CURE Niger guesthouse! Even though he can't walk much yet, he joins the group activities with everyone else - here he's listening to Mantou from our spiritual team tell the story of the tower of Babbel (despite appearances, most of the time he was listening attentively). Praise the Lord that even with the disruptions caused by COVID-19, Chafiou can still recover here, hearing the word of God in his mother tongue. 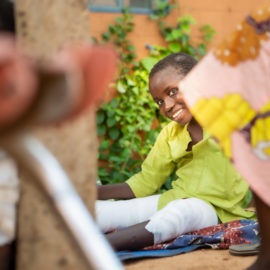 Chafiou is walking! After about two weeks of bedrest and a few bandage changes, our surgeons gave him the ok to get moving again! He took laps up and down the ward, then stopped by so we could read him some of your get well messages. We could tell he liked it when you all complimented his smile (thanks Bob), because his grin got real big. "Thank you everyone," he said afterwards, "May God bless all of you." Chafiou's excited to get back to our guesthouse where he'll be staying as he heals. 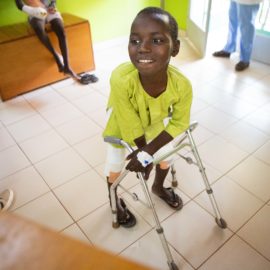 "My favorite animal ... to eat?" Chafiou asked. We had to laugh - we'd asked him what kind of animal he liked best, but we clearly weren't on the same page! Here in Niger most people can't afford to have pets and animals are kept for the value they bring, so it's not a surprise he was thinking of food. Even so, Chafiou loves flipping through the pictures of (live) animals in the ward's chest of donated books. He'll have his next bandage change soon, and thankfully his wound is infection free! Until then, it's more self-entertainment in the ward. Pray for him to soon be well enough to get out of bed. 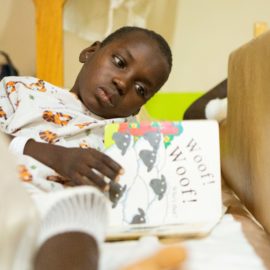 Even though Chafiou's more of a soccer player, he's got pretty good aim with a tennis ball. "In my village we used to tie rags together to make a soccer ball," he told us this morning. He survived another weekend in the ward and still has plenty of positivity left! We're glad he's healing up well and his spirit isn't weighed down by his body's current limitations - pray for a quick healing so he can get back to the games he loves! 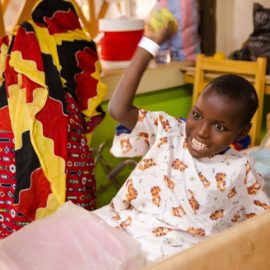 Chafiou went to the OR this morning to get his bandage changed - now he's back in the ward and recovering well. "Inna Gadjiya?" how's your tiredness, we asked him in his mother tongue, Hausa - "Babu Gadjiya," no tiredness, he responded, smiling. We're glad he's in high spirits even with the doctors' decision to keep him in the ward for longer. Pray for his speedy recovery and resilience as he continues on bedrest. 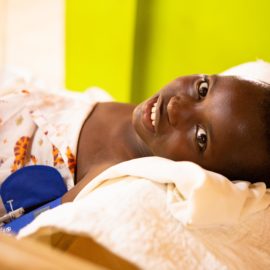 This morning we found Chafiou eating some candy - like most kids, he was really really enjoying himself. Thank God for the little things that break up the monotony of the ward - thank God also for Chafiou's great attitude thus far - "I'm not even tired," he told us, laughing. Tomorrow, after his bandage change, he'll find out if he's got the go ahead to be discharged! 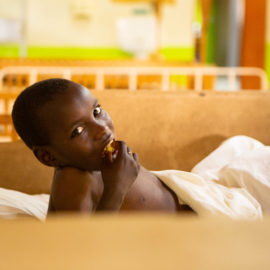 "How are you keeping yourself entertained?" we asked Chafiou this morning in the ward. "I'm playing, of course" he responded. But playing isn't such an obvious possibility for him as Chafiou's going on more than a week of bedrest in the ward. We're glad he's keeping himself entertained, and also being well-looked after by nurse Deborah, who sees progress - "In comparison to his first day post-surgery, he's doing really really well," she says. Friday he'll have a bandage change, and then our doctors will decide if he's healed enough to be able to move around and maybe even relocate to the guesthouse! We thank God for his great recovery and attitude - pray that Friday would bring good news! 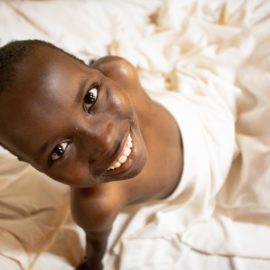 Chafiou flashes us his thousand-watt smile from his post in the ward this morning - he's been confined to bedrest for about a week now but he's still beaming - he's probably used to waiting though - ever since he was burned about a year ago he's been sitting around, unable to really function. But now he's making progress - praise God for that, and pray for continued patience, joy and fortitude while he waits! 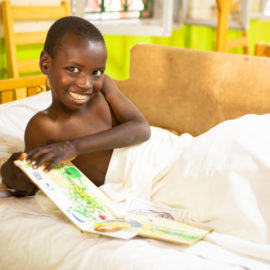 Chafiou sizes us up from his bed in the ward - after his surgery for burn contractures last week his body needs some time to heal in a controlled environment. Even though it's not the most exciting place, Chafiou knows how to make his own fun - every time we pass his bed he throws us a mischievous look. Pray that soon he will be well enough to rejoin the other longterm patients in our guesthouse. 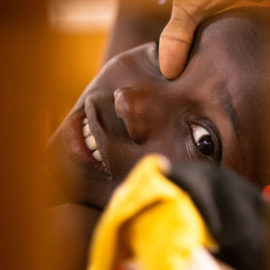 Dr. Anthony and head nurse Fatchima are taking good care of Chafiou post-surgery - he's on strict bedrest for a few more days, which means it's going to be a weekend in the ward. "I want to go back to the guesthouse with the other kids," Chafiou tells us, but his body needs more time to heal. Pray for patience and for a surprisingly fun weekend in our hospital! Here Dr. Anthony is releasing the burned skin on Chafiou's upper legs in order to restore mobility in his hip joints. After surgery, healing, and physical therapy, Chafiou won't be forced to shuffle anymore - he'll be able to really walk! 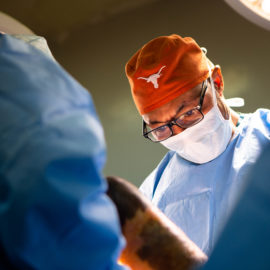 Chafiou is here and ready for surgery! It was a long tiring journey for him and his great aunt, but they're so glad to finally be getting treatment for his burns. These burns are the reason he's sitting on the edge of his seat here - he can't move his legs like he used to - they're locked in a permanently sort-of-bent position. We can't wait to see him after surgery and healing, when he will be able to sit back and relax just like the other kids! 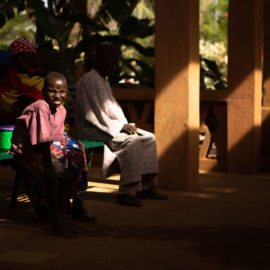 Send a Message to Chafiou

We'll deliver your message to Chafiou at his hospital bed. View get well messages

There are currently 135 different people who are a part of Chafiou's support community. What about you?

This is Chafiou's 1st procedure.

Chafiou has had 1 procedure at CURE Niger. Below are the before and after photos for each procedure. 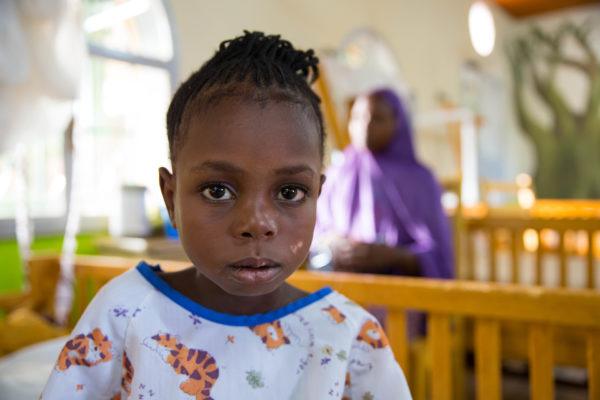 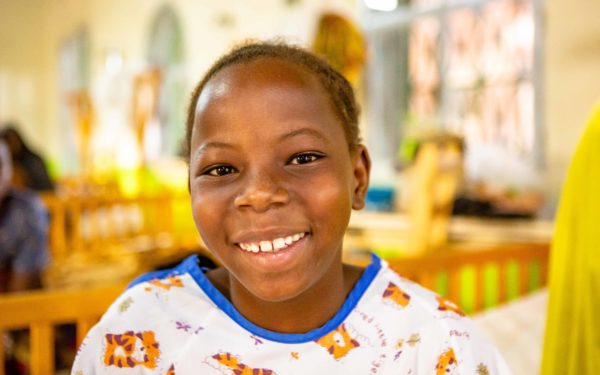 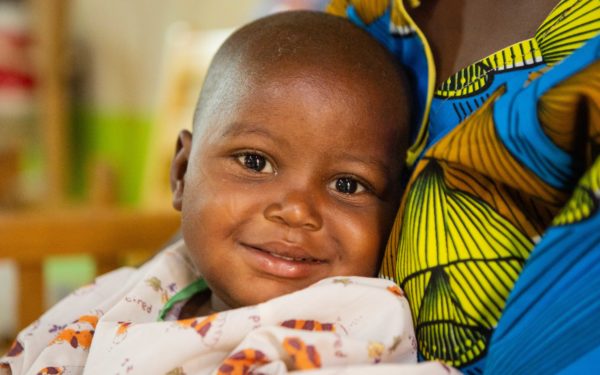 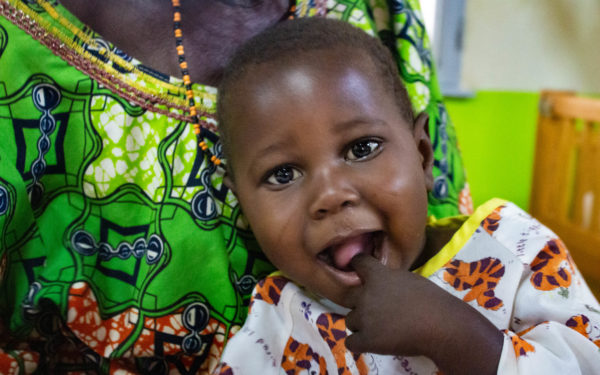 We're sending your message for Chafiou to CURE Niger.

Every month, be a Hero to a child at a CURE Hospital, beginning with Chafiou. Real-time updates will let you see the impact of your giving monthly!

Your generosity will provide major underwriting for a surgery at CURE Niger while you receive real-time updates on Chafiou.