"I only have two friends that I play with all the time because I am Hausa and I live in a Zarma town (two different tribes in Niger). While everyone speaks Zarma, my family speaks Hausa", said Oumal Hair. Being Hausa in a Zarma town already makes O… Read more

"I only have two friends that I play with all the time because I am Hausa and I live in a Zarma town (two different tribes in Niger). While everyone speaks Zarma, my family speaks Hausa", said Oumal Hair. Being Hausa in a Zarma town already makes Oumal Hair different from everyone around her and limits the number of friends she can easily make. To add insult to injury, Oumal Hair was born with two knock knees, a disability which further ostracizes her from not only her Zarma town, but from Nigerien society at large. Oumal Hair's mother Fati said that school was hard for Oumal Hair because so many kids make fun of her. Because Oumal Hair is quiet, she would not tell her parents everything she had to deal with, but they would always find her crying after school. "We never really looked for a solution to our daughter's condition because we never thought there was one," stated Fati. One day though, Fati's neighbor was coming home from town when she saw a large crowd outside the hospital. She decided to check out what was going on. When she went in, she met some of our CURE Niger staff who were out telling people about the work we do. Fati's friend saw a few pictures of the conditions we can treat and she immediately thought of Oumal Hair. Once word reached Fati, she quickly made her way to the hospital and was blown away to find out her daughter can indeed be treated. In that moment, Oumal Hair's family were filled with a hope they never knew existed. Fati's husband was skeptical, thinking that if something sounds too good to be true, it probably is, but Fati says "We are now here at CURE Niger and we are praying and hoping for the best!"

Another week, another bandage change for Oumal Hair! This week, she was able to get the leg brace that had been keeping her leg straight removed and a much smaller bandage put on! She's still on antibiotics and one step closer to the finish line! 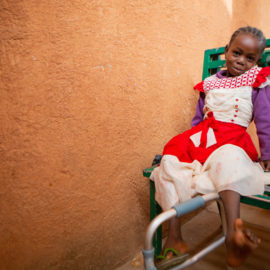 Oumal Hair had a bandage change and wound cleaning today which wasn't the most fun, but she stayed strong through it all! The doctor also saw her and prescribed her some antibiotics to help root out any of the lingering infection that may be left. Please be praying for this little one: for bravery and for strength. 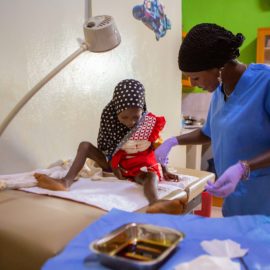 As we had hoped, Oumal Hair was discharged today! Physically, she's doing fine, but she still doesn't feel super well and is refusing to eat or drink. Biba from our Spiritual Staff spent some time talking and listening to her this morning just to help Oumal Hair work through some of the feelings related to her healing process. Since Oumal Hair and her mom live a long way away, they will be staying at our guest house so we can keep a close eye on her leg and make sure we beat this infection properly! 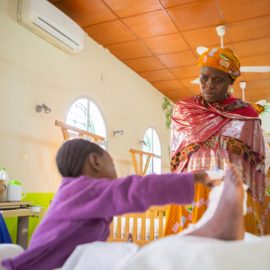 This little lady's procedure went as planned and the doctors believe they were able to clear out the majority of her infection! After the cleaning, they wrapped her leg up in big bandage. It's still a little sore today, but she's just happy to be making progress. Oumal Hair will have to spend the night in the ward, but will hopefully be discharged tomorrow! 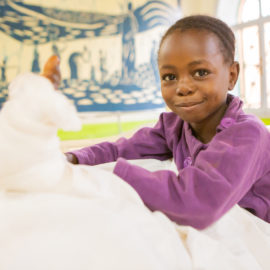 Oumal Hair is back, but with both good and bad news. The good news is that her legs are nice and straight and strong! The bad news is her surgical site has become infected. She was being treated at a local health center, but the infection was beating all the med that were thrown at it so she came back to us here at CURE Niger. Today she's heading into surgery where the doctors are going to manually clean out the infection which should help her finally get ahead of this thing! Please be praying for a safe and effective cleaning! 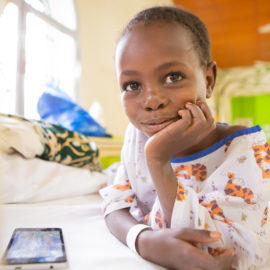 Oumail Hair stopped back for a quick check up and she's doing well. She's officially clear of malaria and fully focused on healing her legs! We caught her laughing which she quickly became embarassed by and tried to hide her smile with her hand! 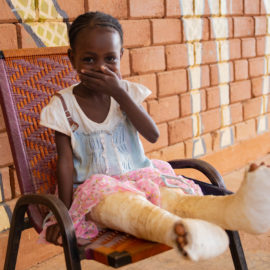 Oumal Hair came back because she managed to come down with a case of malaria. While it's scary sounding, it's just a part of life in Niger. We got her taken care of with some medication and she is already feeling better. She also got a few gifts today donated to the hospital by a Japanese organization. That is always a way to lift one's spirits on a half Christmas like today!

We caught up with Oumal Hair today while Emmanuel from our spiritual staff was chatting with her. He was asking her how she feels and what she thinks about the work she got done. She says that seeing her legs straight is exciting, but she can't wait to see them when the casts are removed! Emmanuel then spent some time in prayer for her. The doctors say Oumal Hair will most likely be able to go home over the weekend and then we'll see her again in about six week's time to check on how her bones are healing! 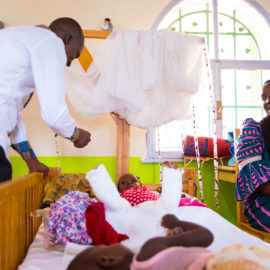 Oumal Hair is doing well after her surgery. This morning she got to talk to her father who was calling to check up on her. She has not complained about anything hurting, but she says that the casts are uncomfortable. She told us that when she tried to move her legs after surgery, she felt her feet were heavy so she looked down and she saw these weird white things on her feet. Her mother is happy to see that her feet already look straighter, even through the casts!

Oumal Hair had her surgery! Everything went well. Before she went in, both her mom and the doctors decided to do both legs at once in order to be as efficient as possible. The doctors used a saw to cut a wedge out of her leg bones which gave them enough space to change the angles and straightened out her legs! They then put in some pins which will help hold the bones in the proper position as they heal up! 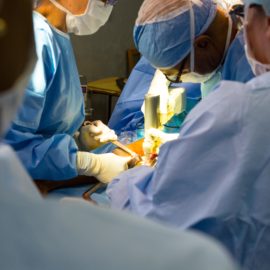 Oumal Hair is here at CURE Niger with us. Even though her family was not specifically looking for treatment, she is not here by accident. God has a plan for her life and we are excited to be a part of it! Please pray for her as she goes in that God will take away her fears and give her strength! 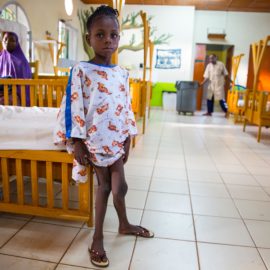 Send a Message to Oumal Hair

We'll deliver your message to Oumal Hair at her hospital bed. View get well messages

There are currently 61 different people who are a part of Oumal Hair's support community. What about you?

This is Oumal Hair's 1st procedure.

Oumal Hair has had 1 procedure at CURE Niger. Below are the before and after photos for each procedure. 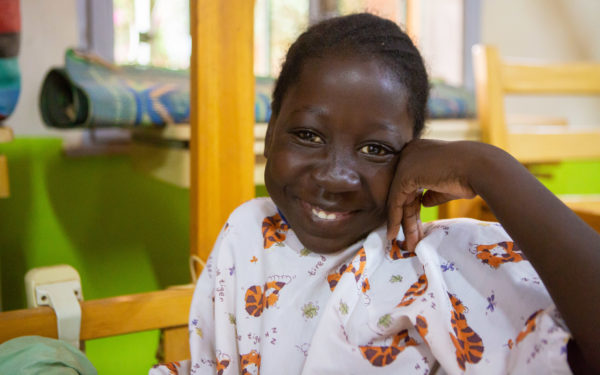 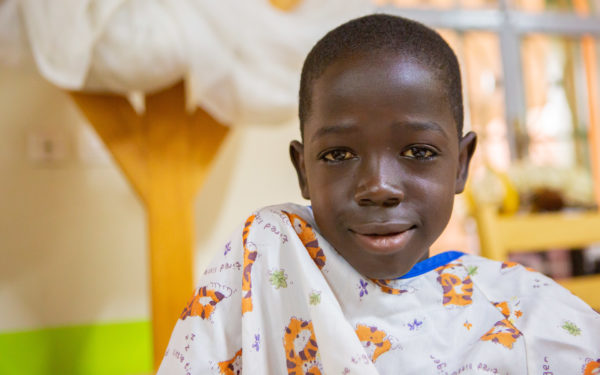 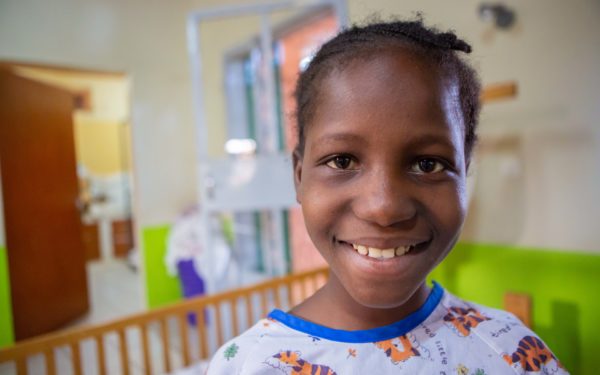 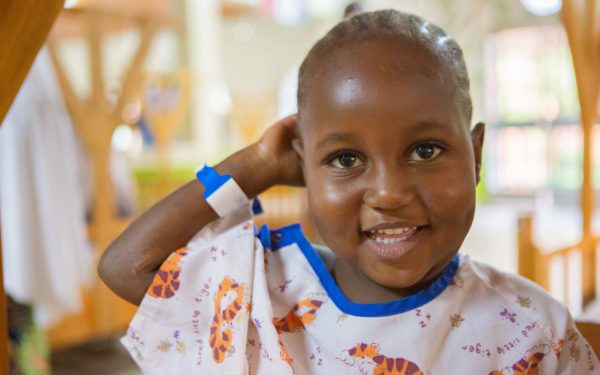 We're sending your message for Oumal Hair to CURE Niger.

Every month, be a Hero to a child at a CURE Hospital, beginning with Oumal Hair. Real-time updates will let you see the impact of your giving monthly!

Your generosity will provide major underwriting for a surgery at CURE Niger while you receive real-time updates on Oumal Hair.