Maria-Ma has seven kids, and she was heartbroken when her baby Mahamadou got burned. It happened during Ramadan last year, the month when the Islamic people fast during the day. Their family is part of a nomadic tribe who live in tents, and Mahamad… Read more

Maria-Ma has seven kids, and she was heartbroken when her baby Mahamadou got burned. It happened during Ramadan last year, the month when the Islamic people fast during the day. Their family is part of a nomadic tribe who live in tents, and Mahamadou’s father is a shepherd, following the herds.

Mahamadou was playing with his brothers and sister one evening, and suddenly he fell into the fire. His father and mother weren’t around, but as soon as they did, they became desperate for help. They didn’t even look for traditional treatments but took him directly to a care center in Madawa, where he had to stay for over 2 months.

While there, someone told them about CURE, and they came as soon as possible. When Mahamadou got here, his right hand was fused together with his arm by scars, so he could not move his wrist. He had one surgery done already at the beginning of this year and now he is back to release his fingers!

Here he is again, today in a much better mood! Mahamadou has only a small wound on his pelvis area that still needs a dressing change, but it is nice to see his smile and pretty soon he will start physiotherapy on his hand! 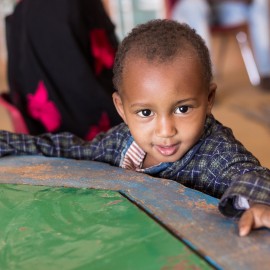 Today he cried a LOT!! Poor baby! Mahamadou was so cranky that even before the nurses started touching him he was already crying. The skin on his hand is pretty dry and soon he will be able to start the massages that he needs to maintain flexibility. Now the nurses are taking care of the wound on his pelvis and it is almost dried too, but Mahamadou is not happy about dressing changes at anytime. Please keep praying for him. 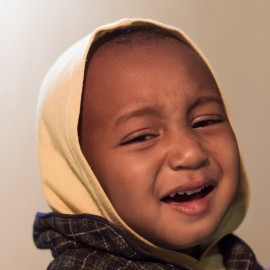 Our baby came today because of a blister on his hand. Mahamadou cried a lot when the nurses took a peek at it. He has an infection on his hand, but the nurses cleaned and medicated it so it can continue healing. The nurses also looked at the wound on his pelvis area, and we were sad to see that it hasn’t healed yet. Please pray for him, we hope his skin can heal fast so he can start the physiotherapy on his hand. 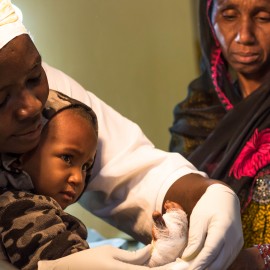 Mahamadou is so sweet! He was not supposed to come today, but his father was a little concerned about the wound on his pelvis area where they took the skin off to do the transplant, and thankfully everything is ok. The nurses changed his dressing and he kept smiling the whole time he was with us. Thank you for praying for our baby! 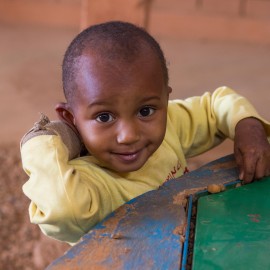 Mahamadou is not shy with us anymore, even though he still doesn’t like the camera, he has walked around in the ward and even chatted a little! Everything is going so well with him that he is able to go home today! He will not change his dressing for awhile to allow time for the skin transplant to heal well. But as soon as we see him again, we will let you know in an update! Yes! He kept his good mood until got in the surgery room, but even an adult gets a little nervous going to the OR, right? The medical team started with a tourniquet to reduce the bleeding. Then, they drew on Mahamadou’s hand where to cut and they released the skin between his thumb and his other fingers. They got skin from his pelvis area to transplant onto his hand and cover the flesh. Before they wrapped his hand with a bandage, they put a good amount of gauze directly on top and sewed it to put pressure on his new skin. This enables it to adhere together. Let’s pray for a fast and smooth recovery! 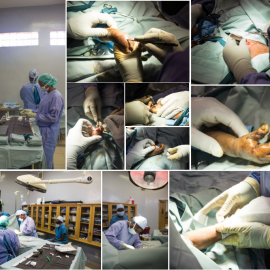 Wow! Our shy boy was happy and talkative this morning! It brought joy to our hearts to see him talking, singing, laughing as he wasn’t nervous at all about his surgery. Let’s pray that he keeps this good attitude and his surgery will be successful! 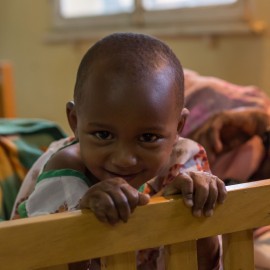 Our boy came to see the doctor, and do a pre-anesthesia consultation, and now he is ready for the next surgery on his hand. Mahamadou is used to wearing his splint, but he was crying today. His mom said that it is because he wants his father - oh! sweet baby! Please pray for his surgery next week. 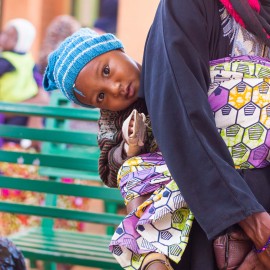 Mahamadou came to have a splint fitted for his hand. He was told that he should use it especially at night, but a few times during the day too. They also scheduled a new surgery for him to enable more mobility in his fingers. We will see him in December. http://bit.ly/1u3tsa5 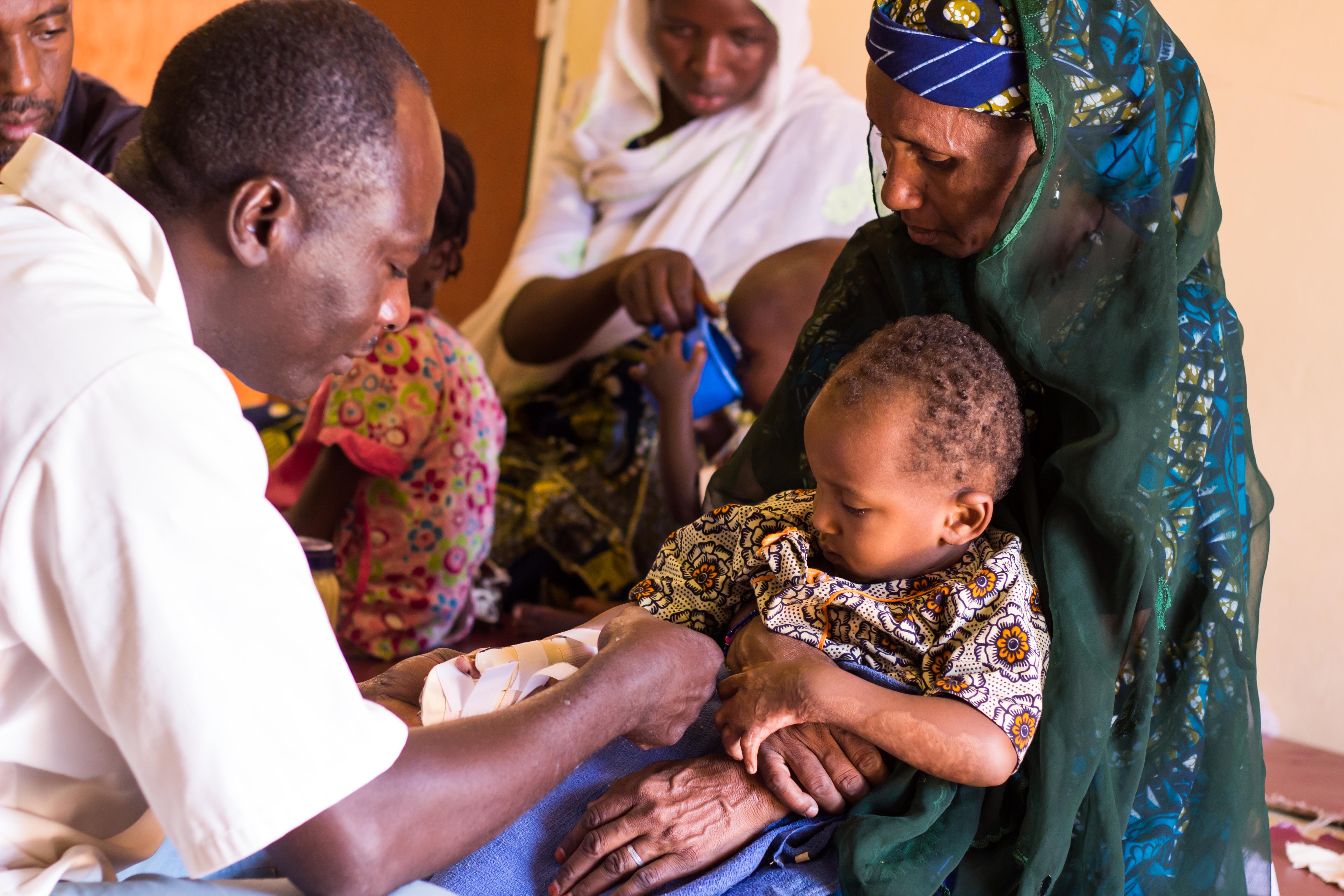 Mahamadou Mamane’s hand is healed! The doctors saw it today and our baby does not need bandages anymore! Yay! No more crying! His mother will need to do massages on his hand everyday with cocoa butter and this will help his skin to have more flexibility. He will also have to do physiotherapy to get full movement back in his fingers. http://bit.ly/1mMwPPk 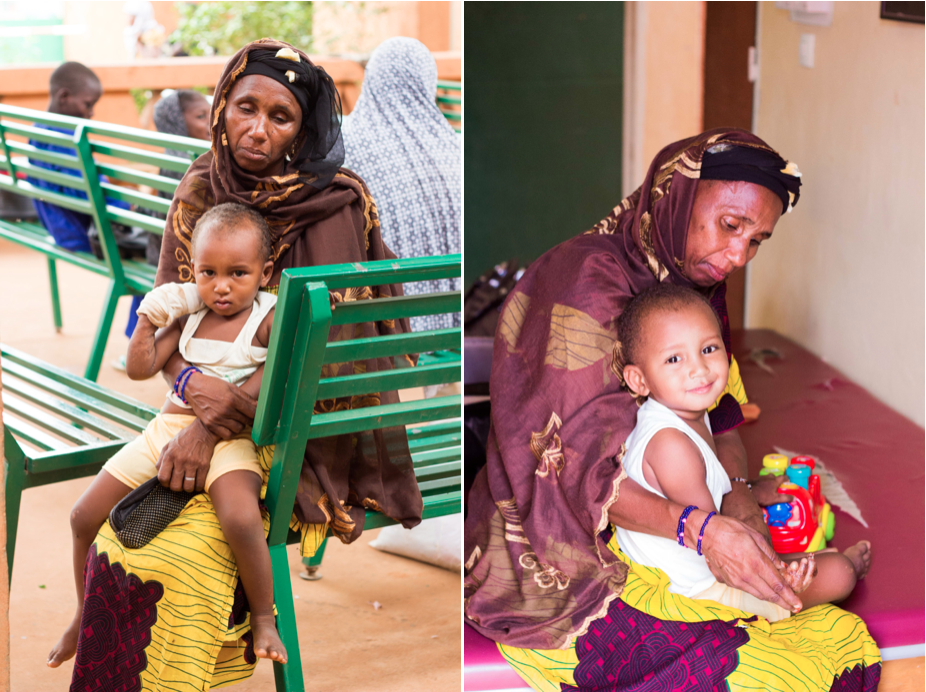 Mahamadou came in with his father and gave us a cute smile while waiting outside. We were happy to see that the incision on his pelvic area is very clean and dry and that his hand is also healing well. Thank you for your prayers! http://bit.ly/1mqv1eW 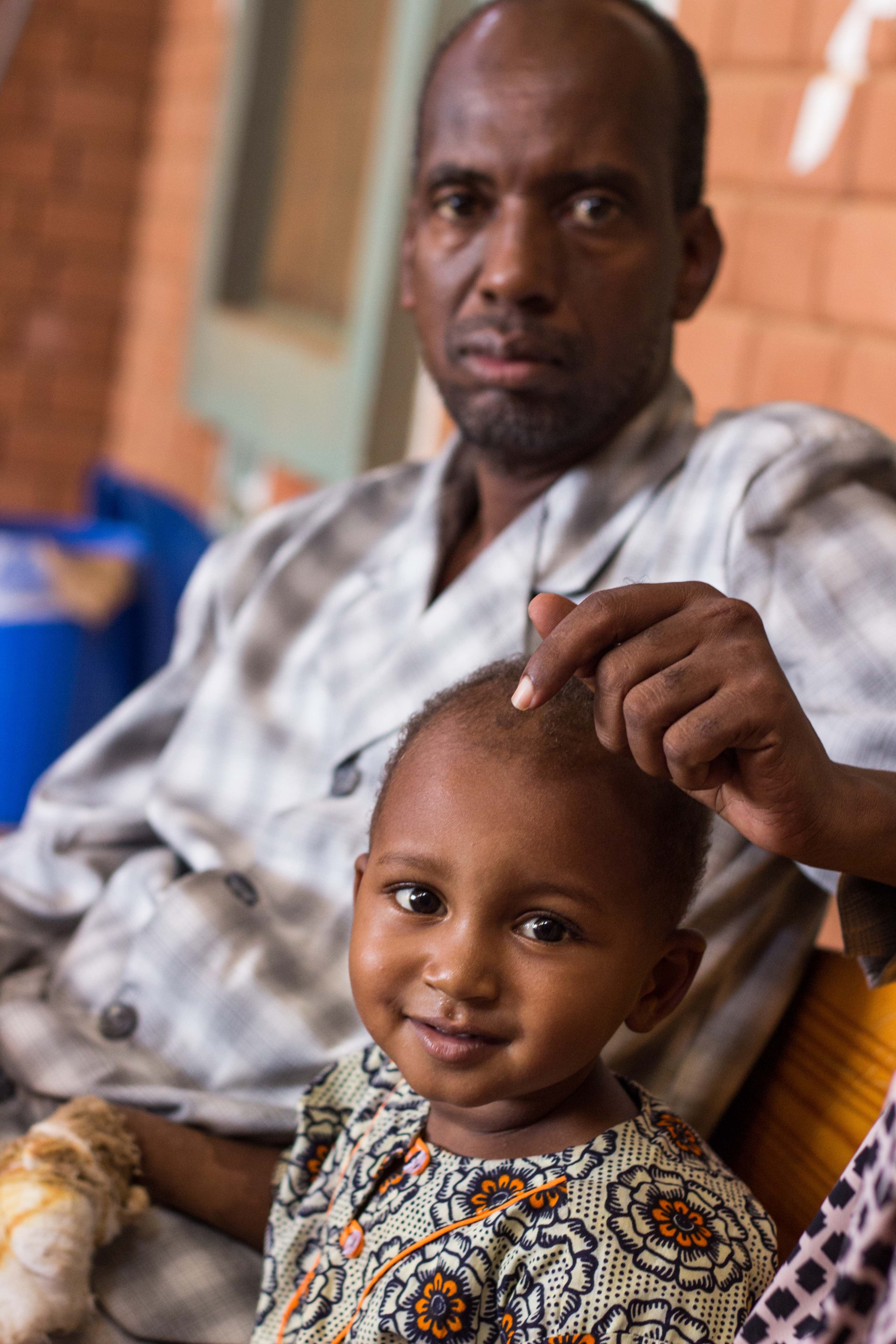 Mahamadou kept crying a lot during his dressing change. The nurses tried their best to make him comfortable but he screams anyway. Poor boy! We think it is more because he is scared, not really because of pain since his hand is healing pretty well. So thankful to God! http://bit.ly/1rlkGRO 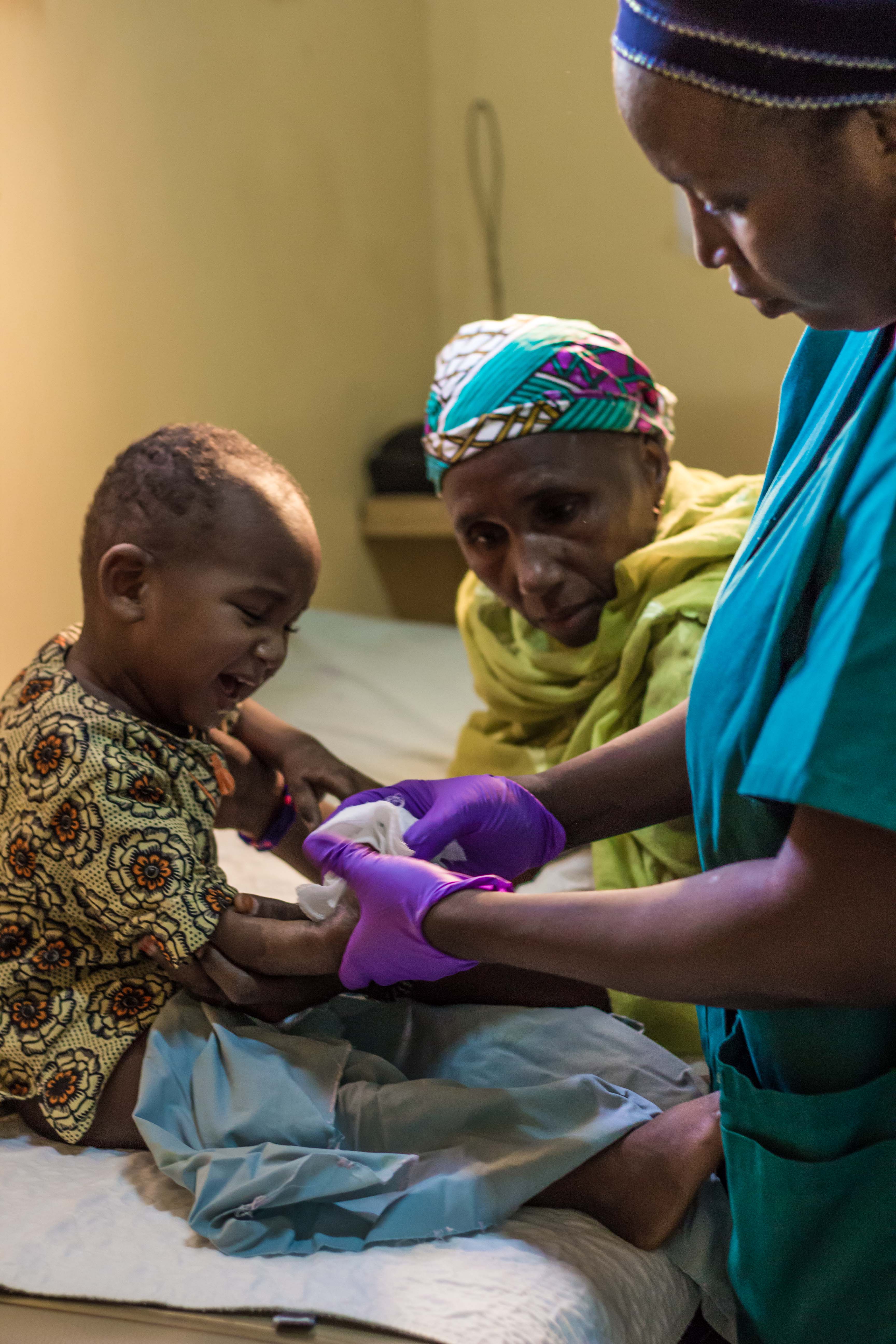 Mahamadou does not like to get his bandages changed, but who can blame him? Especially with all the needles in his hand, it is a little scary for a little baby, but he was brave enough to support taking the stitches out! He will still keep the needles a little longer, so he'd appreciate your prayers, and thanks for supporting this little guy. http://bit.ly/1m80AKp 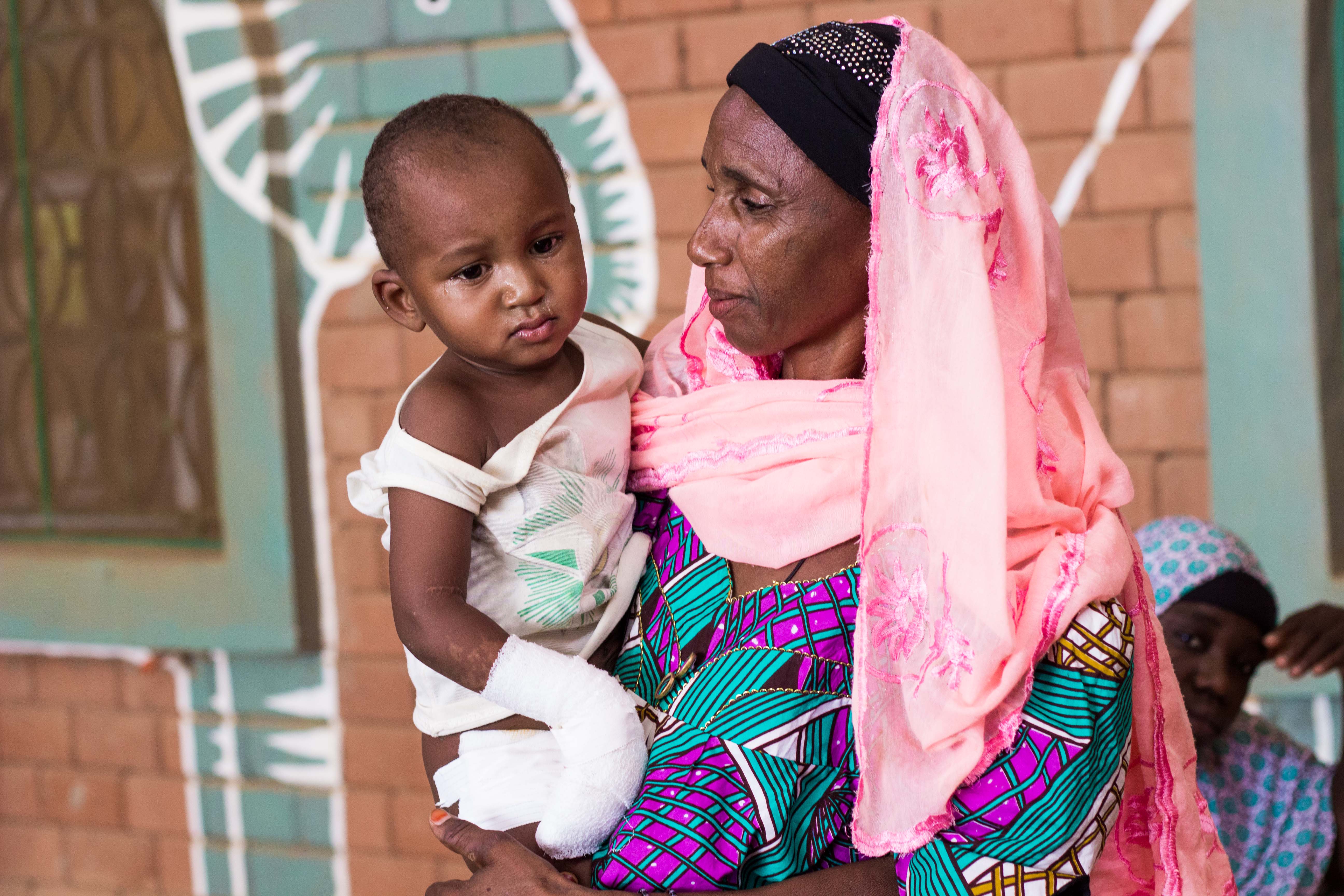 Mahamadou came to his first dressing change. His hand looks really good! There's no infection, and the healing process is progressing nicely. Our poor baby cried a lot because he was afraid of all the needles on his hands (it was the first time he was seeing it), but he calmed down as the nurse covered it back up. They took off the gauze that was sewed on to provide pressure on his hand, but next time they will sedate him in order to take the real stitches off. Keep praying for his recovery please! http://bit.ly/1tPstt0 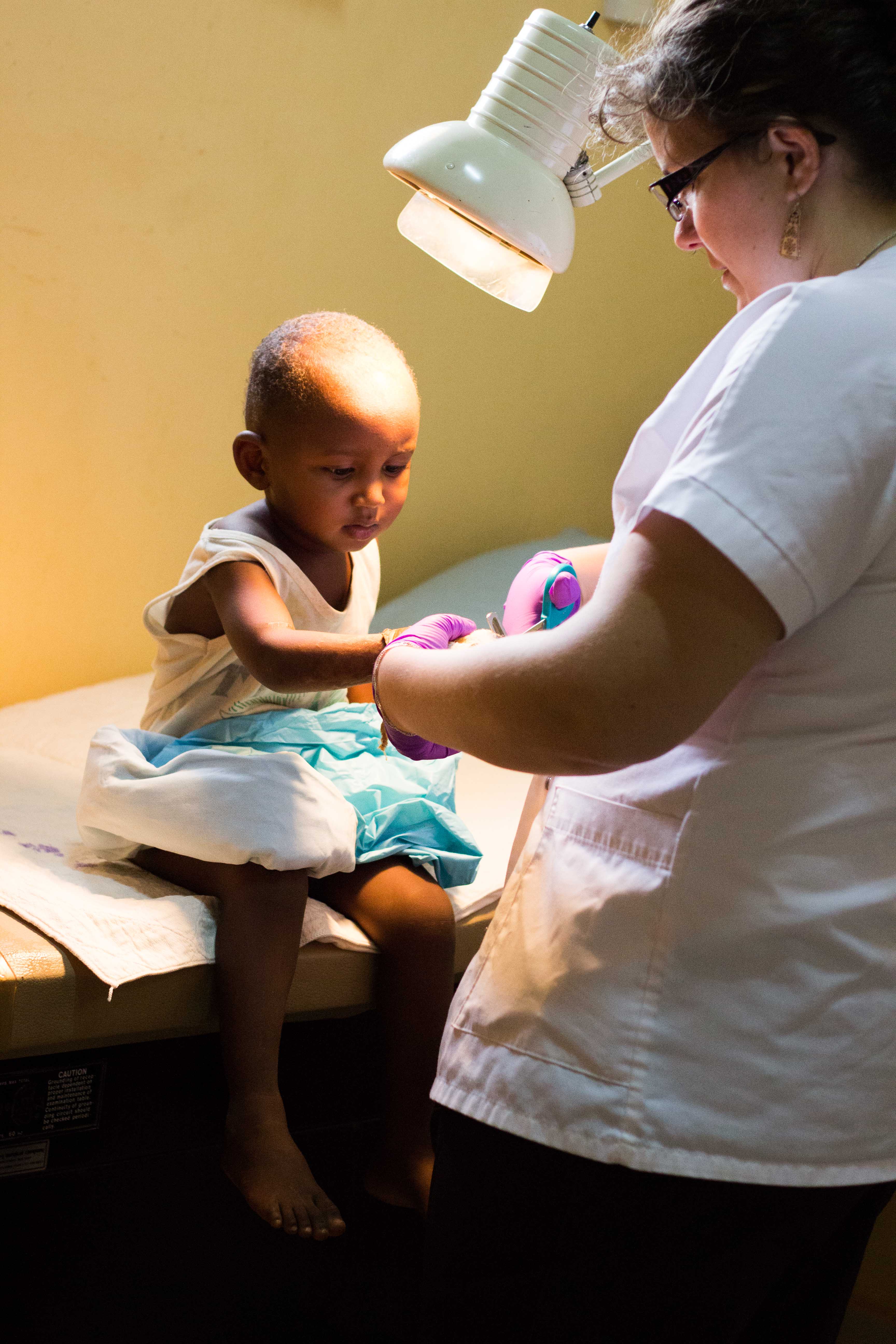 Yeah! It is time to go home!!! Mahamadou had good “baignets”, a kind of Nigerien donut, for breakfast. Yummy. He is doing great and was discharged today. Let’s pray that he will be patient with his recovery. We can’t wait to see him back next week for a change in his dressing! http://bit.ly/1oLYz14 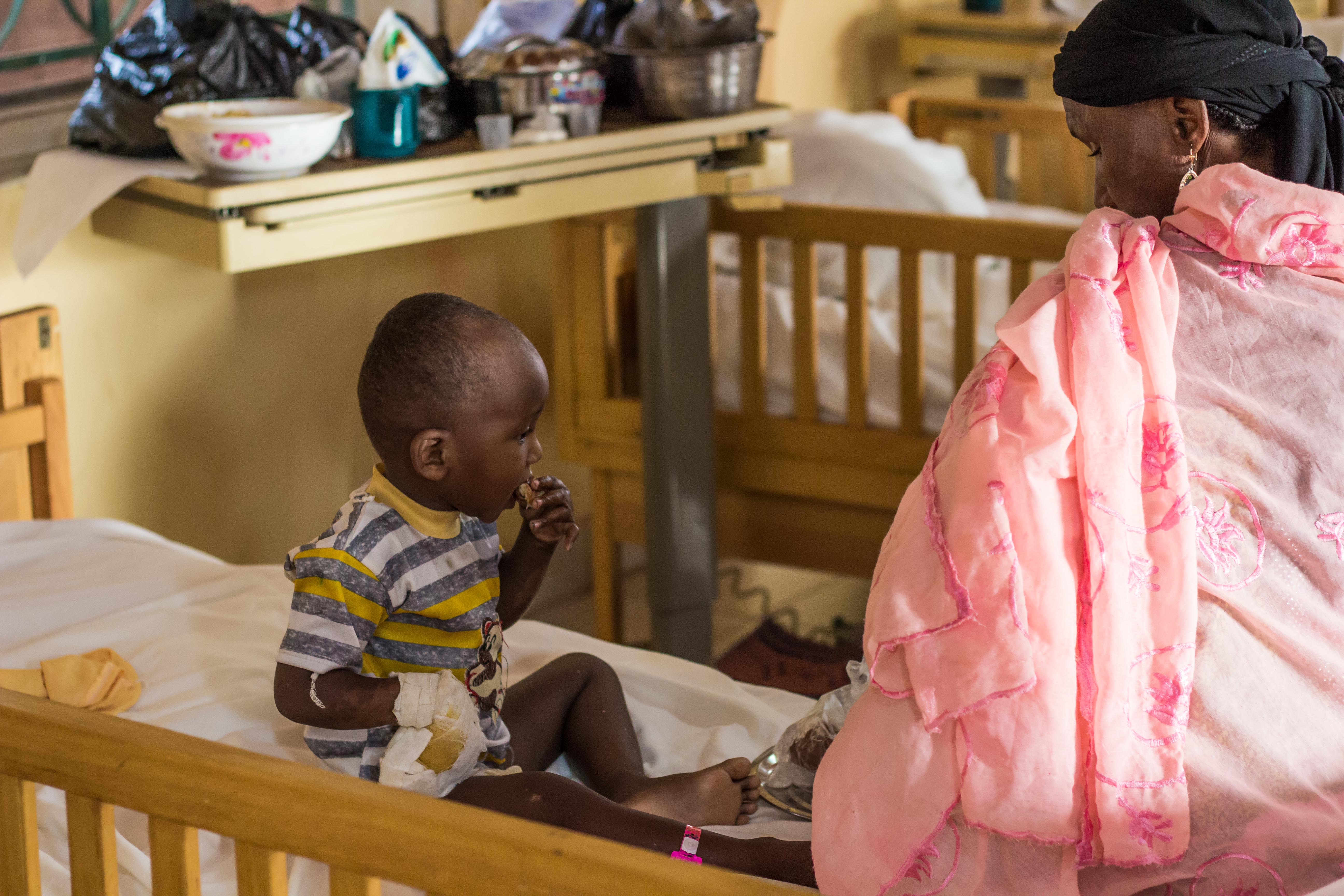 Our baby boy is doing great!! He slept well and he is eating good. Mahamadou has not complained much about pain and is resting most of the time. His mom is happy that everything is fine with her boy. http://bit.ly/1w9WqC5 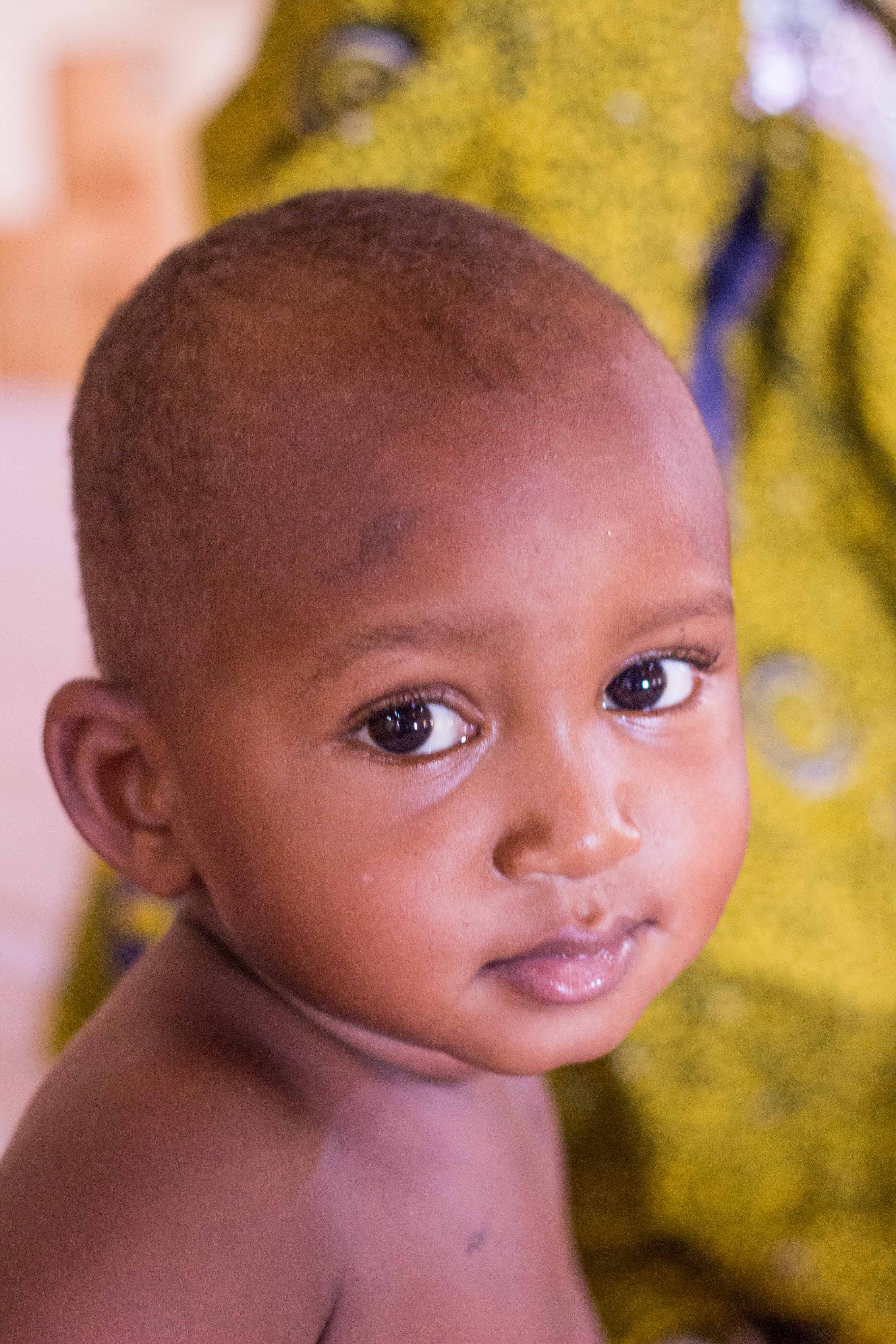 Everything went well with Mahamadou’s surgery. The doctors started by cutting between his three phalanges on his right hand to separate them, and put needles in each one to make them straight. Because he already has had surgeries before, they could not use the skin from his arm, so they had to cut from his pelvic area to have skin to put on his hand. Before they sew the skin onto his hand, they “clean it up” by taking off all the fat from it. After sewing it onto his palm and fingers, they also sew a piece of gauze on the top of it to have pressure and make sure the “new skin” will adhere well to the hand’s flesh. Please pray for our boy, as the doctors already anticipate that it is not an easy recovery. http://bit.ly/1oCZlxl http://bit.ly/Wb8tSI

Our sweet boy is here! Please pray for him as he goes to the OR today to release his little fingers. http://bit.ly/1sYYDyc 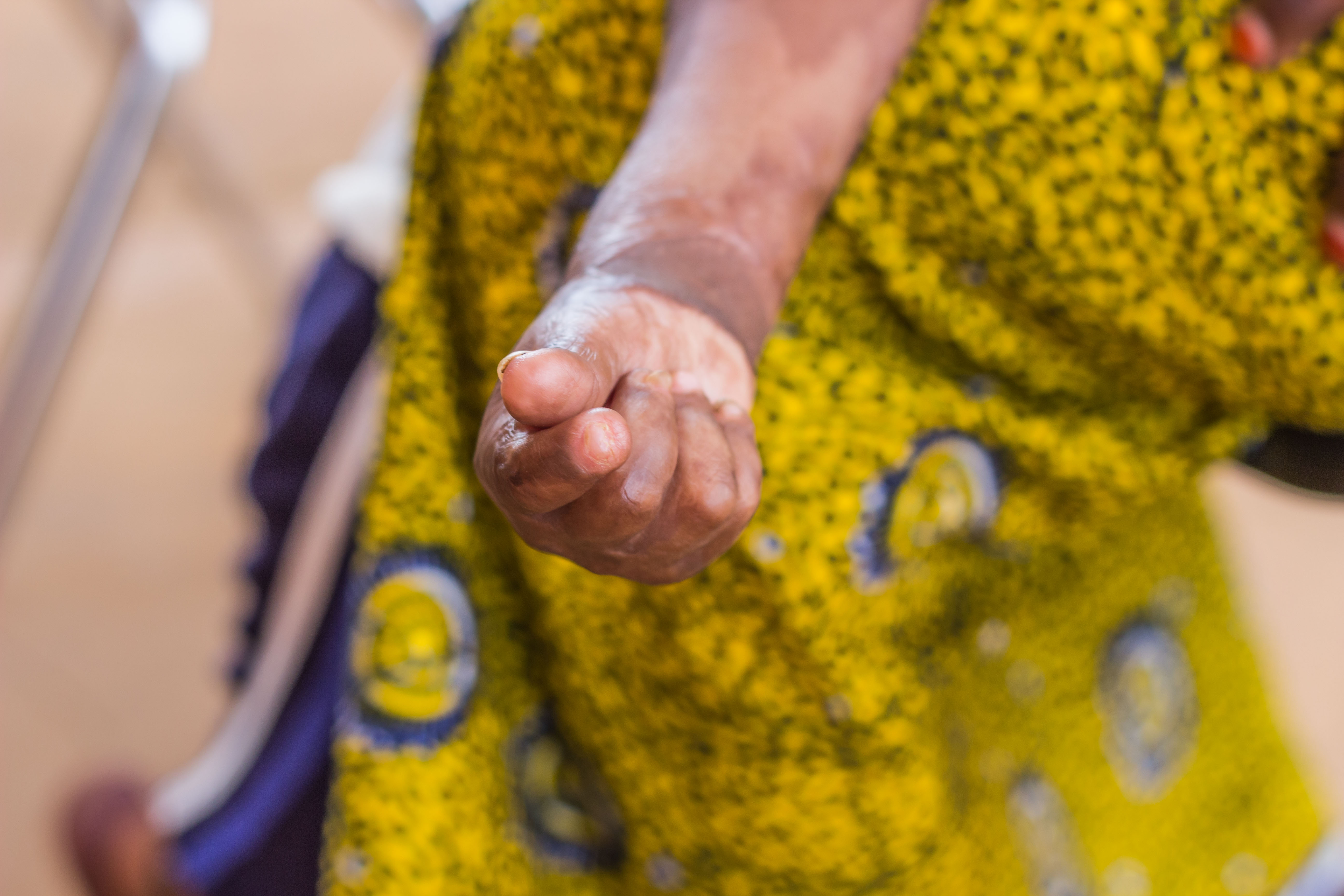 After a whole day on the road, Mahamadou and his mom got here safely! Coming from a small village called Bangui, it's understandable that both are very shy as they get aquainted. Also, because of his condition, Mahamadou has spent so much time in hospitals, and we can tell he is tired of it. We hope we can help make his stay here more pleasurable and finally give him the healing he's been needing. http://bit.ly/1ledkOV 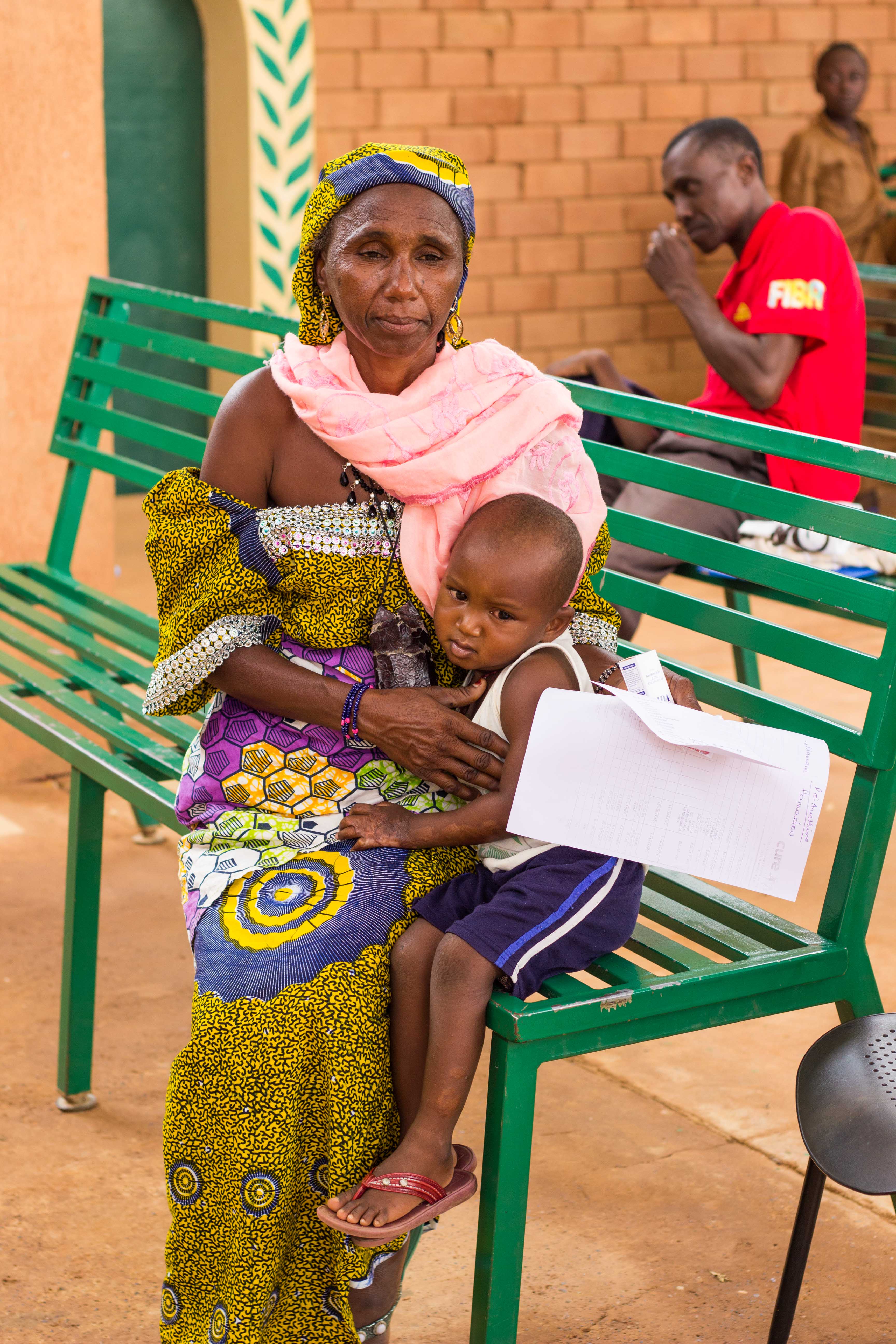 Send a Message to Mahamadou

We'll deliver your message to Mahamadou as soon as we see him. View get well messages

There are currently 35 different people who are a part of Mahamadou's support community. What about you?

This is Mahamadou's 2nd procedure.

Mahamadou has had 2 procedures at CURE Niger. Below are the before and after photos for each procedure. 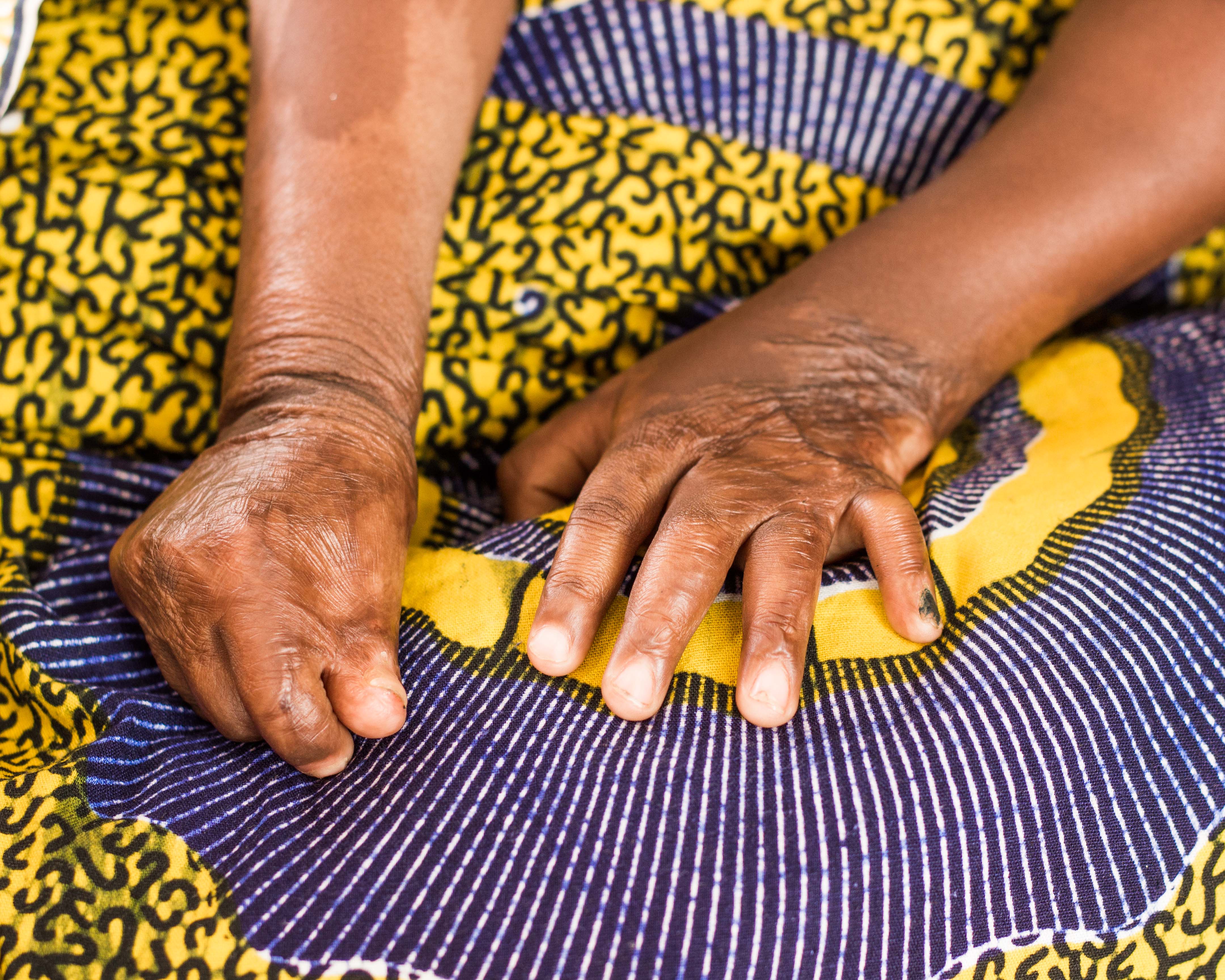 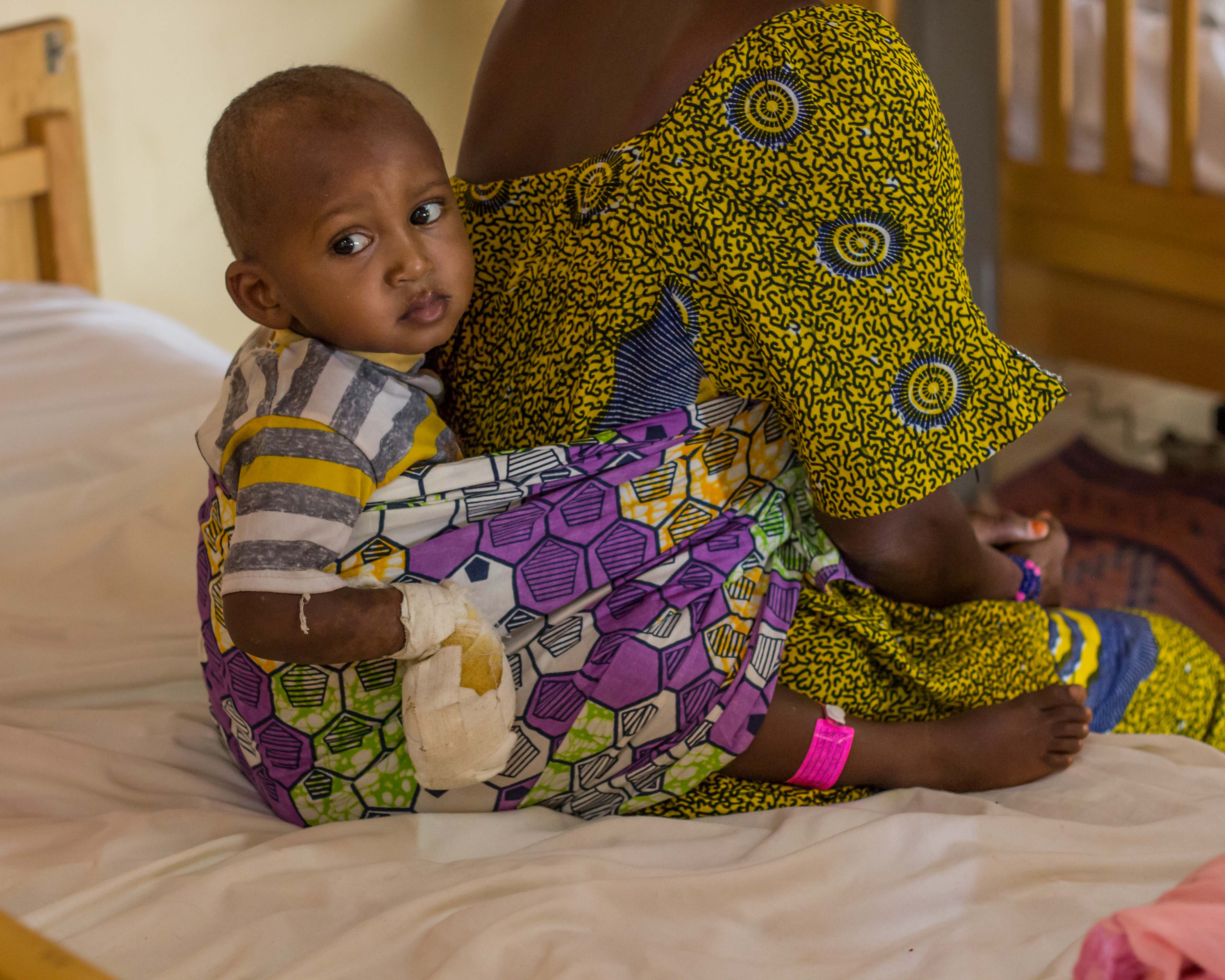 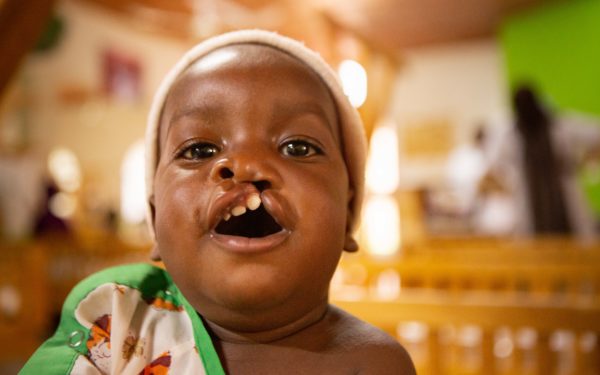 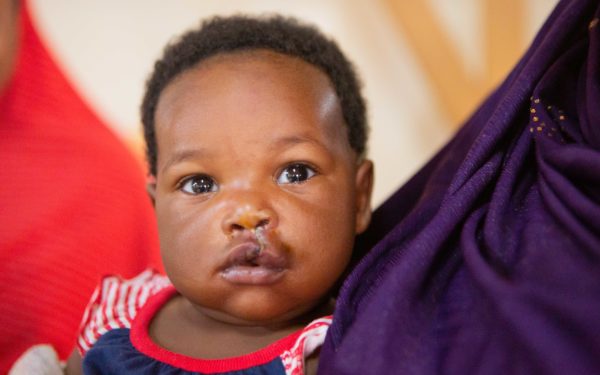 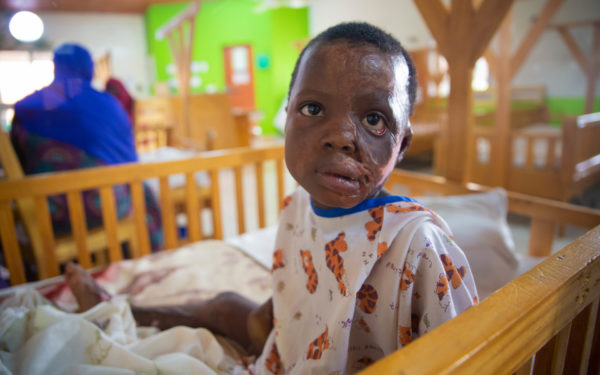 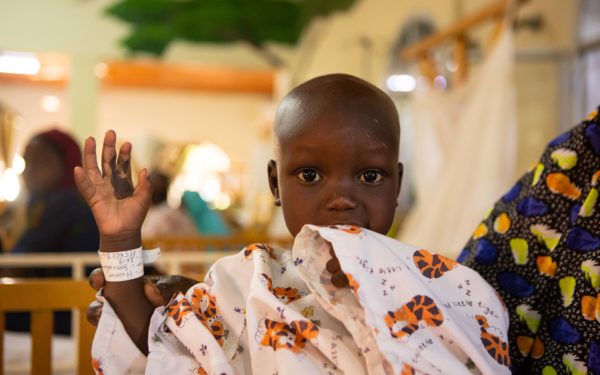 We're sending your message for Mahamadou to CURE Niger.

Every month, be a Hero to a child at a CURE Hospital, beginning with Mahamadou. Real-time updates will let you see the impact of your giving monthly!

Your generosity will provide major underwriting for a surgery at CURE Niger while you receive real-time updates on Mahamadou.