“The day my son Joel got burnt, I was so hopeless that he will make a thorough life.” Joel’s mother, Saraia.

Hot cooking oil burned Joel. His mother was in the house cleaning up while Joel was at the neighbor’s house. Joel was one y… Read more

“The day my son Joel got burnt, I was so hopeless that he will make a thorough life.” Joel’s mother, Saraia.

Hot cooking oil burned Joel. His mother was in the house cleaning up while Joel was at the neighbor’s house. Joel was one year old when he got burned, and he was taken to a nearby hospital for help. “I had to go to another hospital to get my son treated because of the doctors at the first the hospital. (They) told me that it was worse and the burns needed a bigger hospital. I was so hopeless that the next hospital will welcome me,” Saraia said. "We live in Mozambique and where we live, sometimes it is very hard to travel fast to get to the hospital. Thankfully, we got at a clinic in time and Joel was treated." The burns that Joel sustained resulted in failure to use his left arm effectively. Part of his head was burned too.

Joel has been to CURE Malawi before but was not admitted. The doctors found out that he had low blood counts, therefore, he was encouraged to go back home for a month with the provision of a good diet to help with his blood levels. Now Joel will have an operation to release the contracture on his arm.

“The first time I came here seeking help, I knew this was the right place for my son. I came here after being seen (on clinic). I did not know CURE hospital up until I came (to clinic),” Saraia said, and we are so happy that she has come all this way. “I love how my faith will be growing here with the devotion that I found CURE people doing. I will learn new songs that I will teach my friends when I get back!"

Joel came to be reviewed by our CURE Malawi doctors! Joel's mother told us that her son will start school soon since his hand is so much better now. "I know life would have been super challenging if we did not seek help," Saraia said. After a few weeks, Joel will start physical therapy exercises at home which will help his hand function well. Thank you so much for supporting and praying for Joel. We will see him again in a few months. 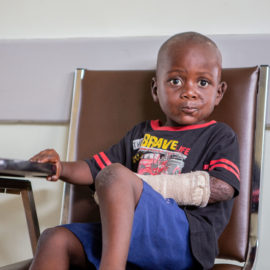 As soon as Joel noticed the other CUREkids is physical therapy room, he could not wait to dress up properly before running to hang out with them! He also came to tell us that he is going back home! He was very happy but sad at the same. He wanted to stay, but it is good that Joel goes home and sees his family for a bit. His mother Saraia says thank you so much for the care, love, prayers, and amazing people who have been around her. God bless you all! 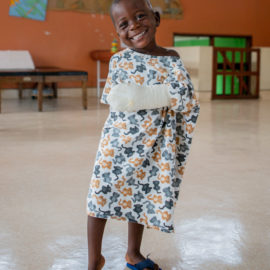 Joel is having his wound check today! The doctors said that after they see how his hand is healing up, Joel and his mother might be going home. Please join us in praying for the two, crossing the border can become really hard during this pandemic! Our hope is that Joel will be able to come back for a doctor's review. 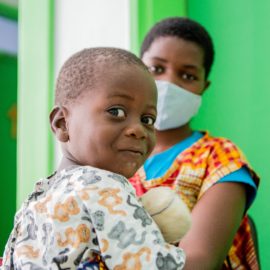 Today, we showed this growing young man his old photos from back in 2019, Joel laughed, and he asked his mother 'when was that?' Joel has an amazing heart for friends, and Joel has many friends within the hospital. As we are waiting for his wound check this coming week, Joel still needs your prayers! 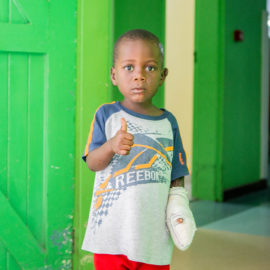 Spot Joel! Joel blended in so well in the kid's physio site! This boy is super fun despite his language barrier. Joel is fluent in Portuguese, and he speaks a little of Malawi's local language. However, that has never been a barrier to communicate with Joel! Our surgeons will review Joel's wound next week. Please pray that when Joel is having his wound be reviewed, it will not be infected. 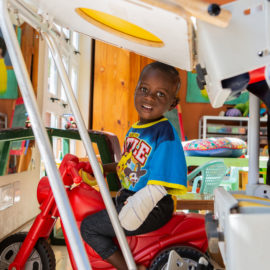 Joel's operation was successful! Dr. Nick was able to release the skin that was contracted. Joel had a rough night, but we thank our night duty nurses who attended to him and helped our little man get some good rest. Now, he is much better! "It was like I was dreaming when I got allowed to pass through the border between Malawi and Mozambique - all along I was denied. I really thank God for opening up the gates!" Saraia, Joel's mother told us. Coming back to CURE Malawi for help has not been easy for Joel's family. Each time they tried to pass through the border, she was among the people who were not allowed. Three times of trial to pass through Saraia wanted to give up. "I want my son to be well," she said. She never gave up! Two weeks ago, Joel appeared at CURE Malawi! We could not believe how much this boy has grown! Thank you so much for your prayers and support! 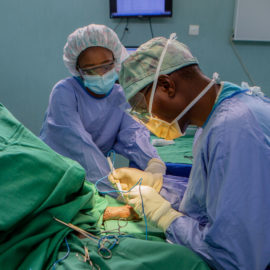 Joel is heading to the operating room! This boy comes from Mozambique and traveled across the borders to get here during this pandemic. It has not been easy! We thank God that Joel's mother worked so hard to cross the borders and bring Joel to CURE for treatment. "I will do anything to get my son helped!" Suraia, Joel's mother, told us. Join us in prayer for Joel's successful surgery and recovery! 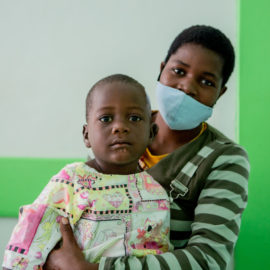 Guess who is back at CURE Malawi after many months! It's JOEL! This boy was last seen by our CURE Malawi doctors in 2019. Today, Joel is back at our hospital for further help. Joel has burnt skin that had contracted. The first time he was here, Joel had an operation to release his burn contracture on his elbow. This time, Joel has burn contractures on his wrist. Please join in prayer for a successful procedure, as our doctors plan to operate on Joel! 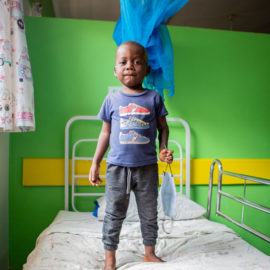 Joel had a successful operation! Thank you so much for your prayers and support. Joel will be here for about a week for our physical therapy team to monitor him. They'll also most likely make him a splint that will help him to keep his arm straight. please continue praying for Joel! 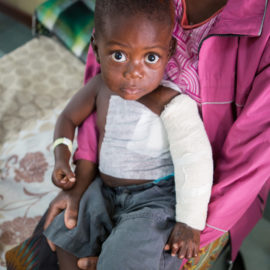 "I personally have encountered the love that most patients, like my son Joel, need in so many hospitals. CURE has really shown us so much love, care and respect. What I have seen and learn at CURE, I will always remember," Suraia sharing with us about the few weeks she has been here at CURE Malawi. Joel will have his wound check tomorrow in OR. The doctors said with how Joel has been over the weekend, they expect to find nothing but good things tomorrow! Thank you so much for the support you all are taking part in Joel's life with prayers and encouragement. Please join us in prayers as Joel will be undergoing a would inspection. 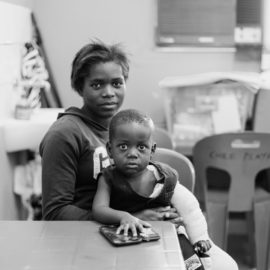 Joel's operation was successful! Today, he was not as happy because of some residual pain, but the nurses hooked him up with some pain meds and he'll be feeling much better soon. We tried to raise his spirits a little by giving him a balloon to play with in order to take his mind off his arm. Please continue to pray for Joel! 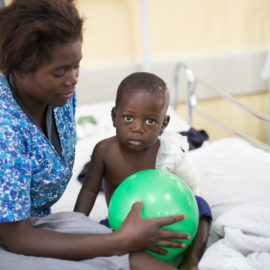 Welcome Joel! Joel comes from Mozambique with his mother Saraia. Over the last few months, Saraia has been looking for treatment for Joel but could not find any help. After Joel had his wounds dressed from the burns he sustained, his left arm contracted. After being seen elsewhere, Joel was then seen by CURE Malawi doctors at a clinic and booked for an operation. Joel will have his operation today and our doctors will release the contracture. Please help to pray for and encourage Joel and his mother Saraia as they are here at CURE Malawi! 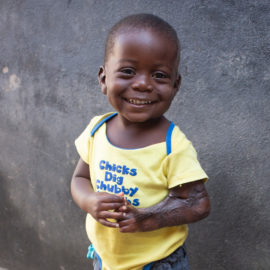 Send a Message to Joel

We'll deliver your message to Joel as soon as we see him. View get well messages

There are currently 89 different people who are a part of Joel's support community. What about you?

This is Joel's 2nd procedure.

Joel has had 2 procedures at CURE Malawi. Below are the before and after photos for each procedure. 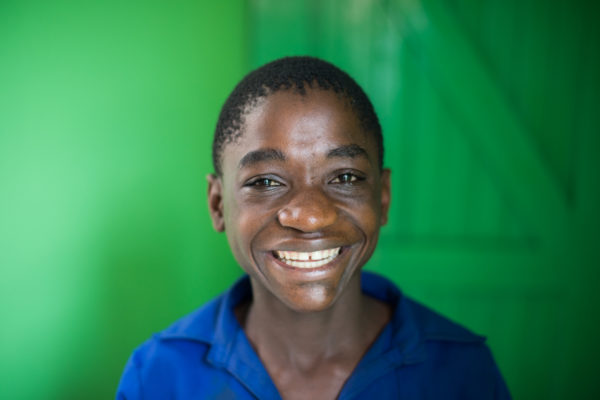 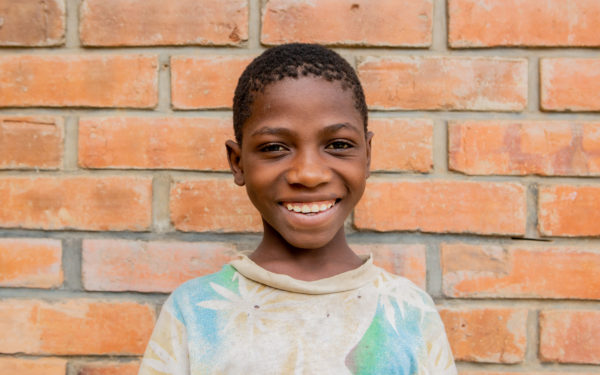 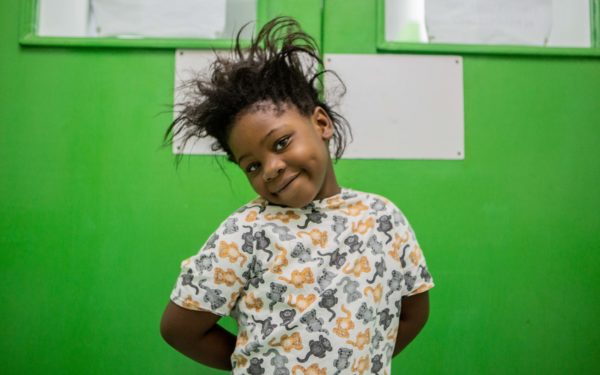 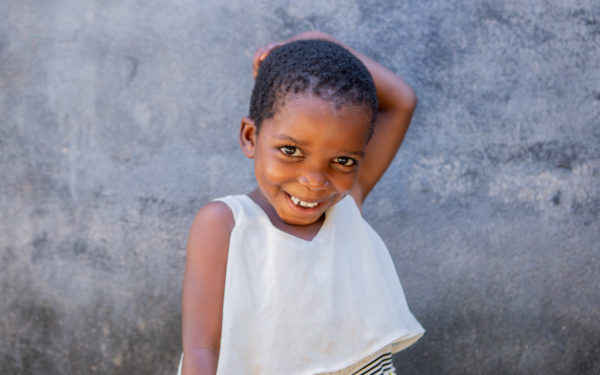 We're sending your message for Joel to CURE Malawi.

Every month, be a Hero to a child at a CURE Hospital, beginning with Joel. Real-time updates will let you see the impact of your giving monthly!

Your generosity will provide major underwriting for a surgery at CURE Malawi while you receive real-time updates on Joel.