“I was playing football when my leg broke. My friends carried me home on their backs after I got injured. They only came once, the day after the injury, to see how I was doing, since then they haven’t visited me again. Before that we had been p… Read more

“I was playing football when my leg broke. My friends carried me home on their backs after I got injured. They only came once, the day after the injury, to see how I was doing, since then they haven’t visited me again. Before that we had been playing together every day,” Kennedy says.

Kennedy arrived here at CURE Malawi with his uncle Aaron to have his malunited tibia fixed. The doctors have decided to use a frame to correct the injury, which will slowly straighten the bone.

Aaron says, “My nephew Kennedy was born healthy, but one day this past February, as he was playing football with his friends, he broke his leg. Of course he immediately reported that his leg was injured at football, but at first we took it lightly, thinking it would be okay. We only discovered his leg was broken after a month when we realized that the bone was protruding. We took him to Liwonde Hospital where they were supposed to have an x-ray for a leg. But unfortunately the x-ray machine was broken, so we went to Balaka Hospital, where they did the x-ray and then they sent us back to Liwonde Hospital and we were admitted there. We only got seen on the third day after being admitted. Upon seeing the x-ray, they told us to go to Beit CURE Hospital in Blantyre, and that is why we are here.”

Kennedy’s broken leg has affected him and his family a lot, especially in terms of his interactions with his friends. Kennedy says, “The disability has affected me a lot; my other friends say, ‘they delayed taking you to the hospital, so now you’re disabled and you’ll be like that forever’. It hurts me so much because I was once healthy like them. With this disability I am not able to run, and when somebody hits my leg I feel pain. I have five siblings and at times we will be fighting at home and they’ll hit me where my leg broke and that’s when I feel pain. My friends compare me with a crippled 17-year-old boy in our village. It hurts me a lot when they say that my mom should pray for me that I should get healed, but then they say that even if she prays in tongues it will change nothing.”

Please join us in praying for Kennedy, that his leg will heal straight and strong and that his story will provide an example in his village that prayers can be answered and broken bones can be mended!

“Now that I’m here at CURE, I believe my leg will be healed because I have seen my friends here being healed. I will be very happy when my leg is healed because all those friends of mine who were mocking me will do so no longer. When I finish school I want to be a doctor because I have seen doctors helping sick people and they get better, so I also want to help sick people get better. “

Kennedy's going to be on the radio! Pamela does a local radio program to help raise awareness about CURE Malawi in the community to encourage more kids with disabilities to come in, and Kennedy was a perfect choice for an interviewee!

We also brought him get-well messages on Friday. He told us, "I'm so happy with the messages you have sent me, continue, don't stop. Pray that my siblings are safe. They're all young, and they're by themselves, so you should pray that God will protect them. My dad passed on in 2011 so there's just children at home. My mom remarried but they broke up. My eldest brother is 19, then 17, and the youngest are 5 and 3. But the 19 year old is looking after them. We're all boys. My mom works at the church with my oldest brother, but they leave the other kids behind and will come in the day to see how we're doing and to give us money for food." Please be praying for Kennedy! Fortunately, his x-ray is looking good which means he and his mom will probably head home tomorrow! 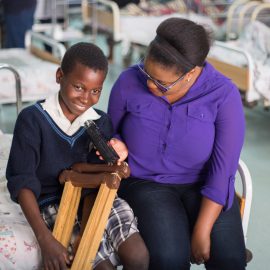 "It's improving but it still isn't quite straight." Kennedy's sticking around until Monday since the new turns don't finish until then and he needs to get an x-ray before he goes back home! He's been having fun playing on the playground in the meantime! "We played some ball games and were shooting pom-poms with these "slingshots" made of a cup and a balloon." 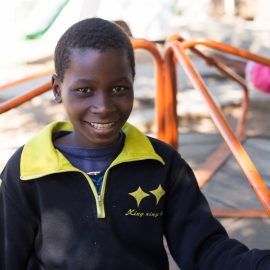 Kennedy's here at the hospital waiting for another program for his frame. He says, "The bone has moved to the other side and still isn't straight so they've added some more turns to make it straight." Fortunately, he's been able to play with his friend Filla while he waits! 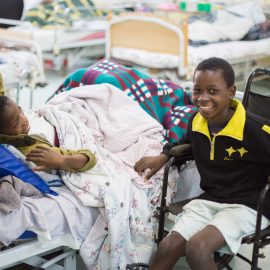 Kennedy's still smiling and he's back for a checkup and x-ray to make sure the bone is in place and will heal straight. He says, "I'm doing great! But unfortunately most of my friends are frightened of my frame... I tell them, 'Don't be afraid, it's not painful', but most of them won't come close. Please pray that my leg heals quickly." Unfortunately, he needs to keep the frame on for several months while it heals straight, so in the meantime please pray that his friends will become more understanding! 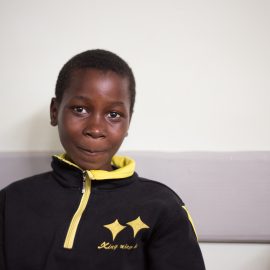 Kennedy and his mom have headed home today! Dr. James was confident that his mother was doing the turns and cleaning correctly and they only have a couple days of turns, so he told her she could take him home. We caught a photo of him with his giant grin doing some physiotherapy with Diana, but he disappeared before we could say goodbye! He'll be back next week though for a checkup since he lives nearby. Please be praying for him. 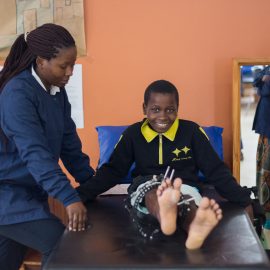 Unfortunately, Kennedy's x-ray shows that we still need to do some fine-tuning on his frame to get the bone correctly aligned straight. His mom is doing a great job practicing keeping his frame clean for when they are able to go home though! 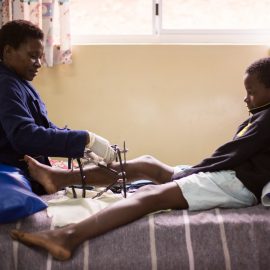 Kennedy's doing well and we're just making sure he's all set to go home Friday if his x-ray looks good! He says, "The physiotherapist came to see how my mom is doing the turns - unfortunately my mom wasn't there so they had to came back later to watch. She was doing it right!" 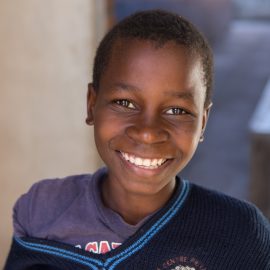 "I'm feeling much better than I was before. We have been told after they are done with the turns, they will do an x-ray on Friday. If it looks the way the doctors want, I can go home, otherwise they may add some days. I really want to go home, I'm tired of being in the hospital. I like playing in the playroom and with Alex though! Something new I've learned here is about the Word of God - we learned Romans 3:10," Kennedy says. 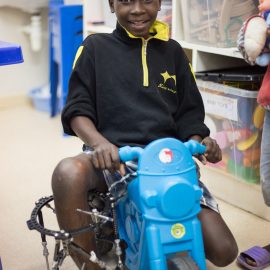 We brought Kennedy his get-well messages today and he says, "I'm very happy with the letters they have wrote me. They should just pray for me that I continue to heal quickly." A lot of his messages mentioned football (soccer) so we asked him if he's been following the World Cup - "Because I'm in the hospital, I'm not following, but when I'm at home I do, and I even watch." We asked him who he wants to win and he said the Malawian team - who unfortunately didn't qualify! So we asked who his favorite local team is and he says he follows the Big Bullets and his favorite player is Chiukepo Msowoya! 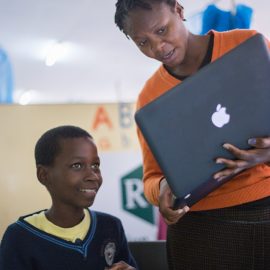 "My best friend in the hospital is Bestwick. We go to the playroom together. We color and play on the toy motorcycles. I've learned about God, that he's a Creator who created the heavens and the earth," Kennedy says. We're thankful for the truth and the friendships that are shared here at CURE Malawi! 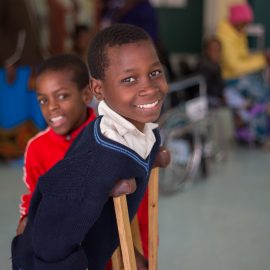 Kennedy says, "I'm feeling much better than the first day after surgery. I'm able to walk around. I've been playing bao with the other kids. When I went to the playroom today they gave me a heart that says 'Jesus Loves Me' and a page to color in." 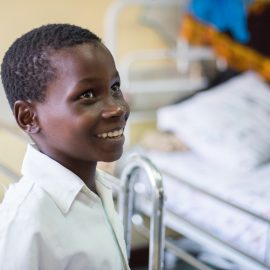 Oops! We were busy yesterday and missed most of Kennedy's operation, but managed to go in while they were getting ready to bring him out of the operating room and got a shot of his frame! The doctors cut the tibia at the break and the frame will bring it back together and help it heal straight. He only needs ten days or so of turns to get it into position but then he'll need to go home with the frame on for several months while it heals strong. Please be praying for patience for him! 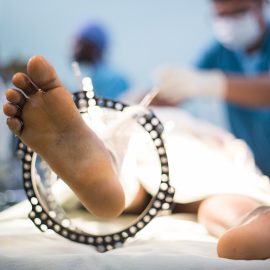 Kennedy's waiting for his operation today! The doctors made a last minute decision to do his surgery today after realizing that they won't have time tomorrow since they already have two more frames to do tomorrow. Frames take a long time and the surgical kits need time to be sterilized as well. We asked Kennedy how he felt about his rapidly upcoming op and he says, "I'm very happy because I know I'm going to be healed. I'm not scared. Please pray for me that I am healed quickly." 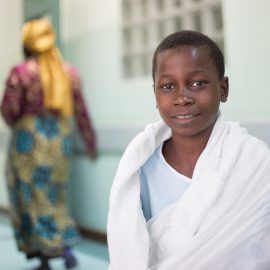 Meet Kennedy! He's a chatty boy who had the misfortune of breaking his leg during a game of football (soccer for our American followers). Now he's at CURE and the issue will be resolved with a frame to help his bone heal straight. Please join us in praying for him as he will have surgery later this week! 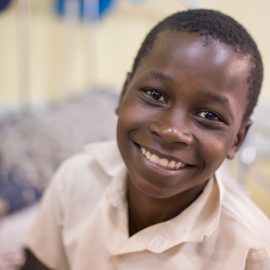 Send a Message to Kennedy

We'll deliver your message to Kennedy as soon as we see him. View get well messages

There are currently 356 different people who are a part of Kennedy's support community. What about you?

This is Kennedy's 1st procedure.

Kennedy has had 1 procedure at CURE Malawi. Below are the before and after photos for each procedure. 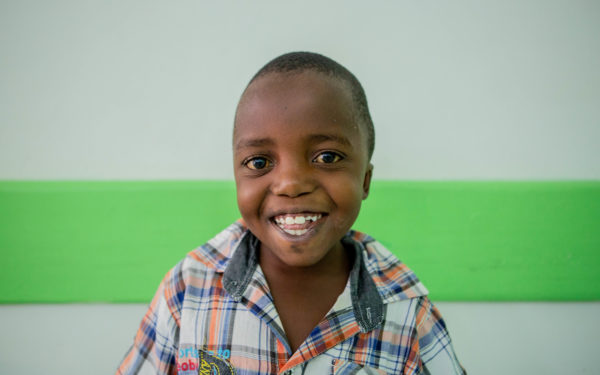 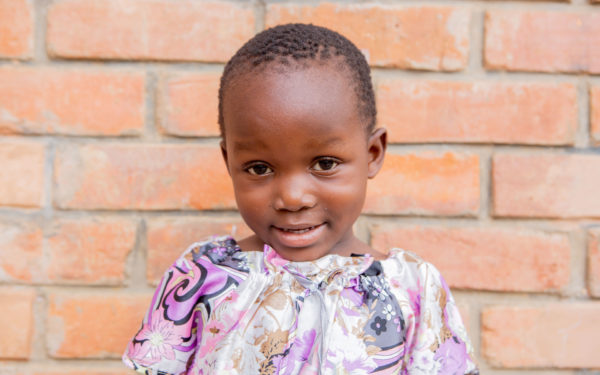 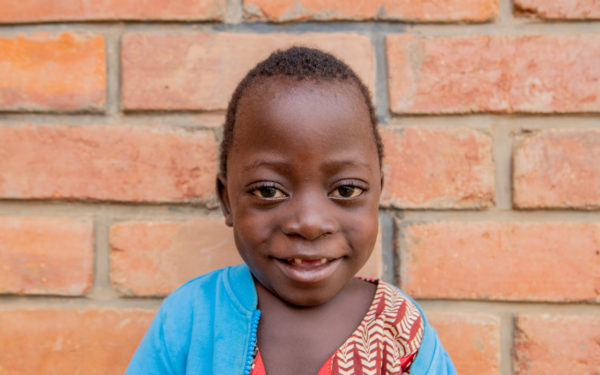 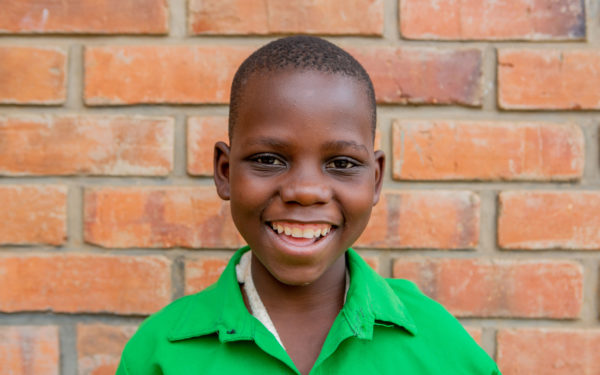 We're sending your message for Kennedy to CURE Malawi.

Every month, be a Hero to a child at a CURE Hospital, beginning with Kennedy. Real-time updates will let you see the impact of your giving monthly!

Your generosity will provide major underwriting for a surgery at CURE Malawi while you receive real-time updates on Kennedy.