Baraqo’s story is one of pain and it leaves you questioning humanity. This little boy who is very happy and just has an amazing character will make you shed a tear when he starts telling you about himself. Baraqo is here with a neighbour who live… Read more

Baraqo’s story is one of pain and it leaves you questioning humanity. This little boy who is very happy and just has an amazing character will make you shed a tear when he starts telling you about himself. Baraqo is here with a neighbour who lives very close to his home. His neighbour decided to bring him because both his mother and father do not know any other language apart from their mother tongue and so this would really hinder any communication between them and anyone who isn’t from their tribe.

Baraqo comes from the northern part of the country where most people keep livestock for a living. Such places are usually hot spots for cattle rustling and territory wars between communities. One very dark night for Baraqo’s family and village, bandits raided the village with an intention to scare the locals and steal their animals. During the attack, some of the bandits went inside Baraqo’s house and shot everyone who was inside the small manyatta (grass thatched house). Since it was dark they couldn’t necessarily see who they were shooting and where.

Some of Baraqo’s siblings lost their lives during the attack. Last year (2019), when Baraqo was 5 years old, he got shot in the leg very close to the hip. “I saw a lot of blood when I woke up and there was what seemed like pieces of bones from my leg.” Baraqo told us. He was rushed to a nearby hospital where they stopped his bleeding and then he had to be moved to Nairobi where he would receive more treatment. Baraqo went through a series of skin grafts and surgeries to try and reconstruct his leg. After a few months, he was healed and was allowed to go home. The neighbour who is with him at CURE Kenya now tells us that for a long while, Baraqo was super traumatised and every time he would hear a loud bang, he’d get very scared and uncomfortable.

A few months later, it was realised that Baraqo’s left leg was shorter than his right. He couldn’t step down with both feet properly. Baraqo’s left foot also started curving stopping him from stepping his foot down. He couldn’t stop using his crutches to move around. In an attempt to correct this, friends and family heard about CURE Kenya. They organised for him to get here and now they are very hopeful that something can done so he can at least use both legs to move around.

Look who had a chance to meet Baraqo, CURE’s president, Justin. He got an opportunity to experience Baraqo's energy and fun personality. Although Baraqo couldn’t really converse in English, he was able to understand what Justin told him. Baraqo also received news that he might go home today and that made him very happy. We’ll see him again in a few weeks when he comes for a review. 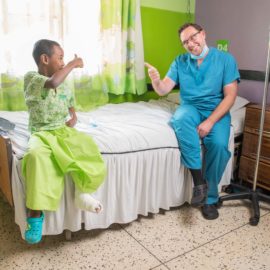 Baraqo was so excited to have his vitals taken this morning. The nurse who was in charge of that knew some of his language and spoke to him in it. Baraqo was excited because he didn’t think that, other than his guardian, anyone else would speak his mother tongue. Baraqo is doing well, and we are happy with his healing progress. 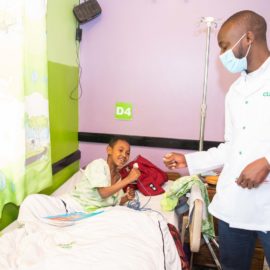 We found Baraqo resting this morning. We spoke to his guardian, and he told us that Baraqo slept through the night. The only problem was that he could hear other kids crying in the ward, causing him to wake up as well. We thank God for Baraqo’s healing journey, and we pray he gets well soon. 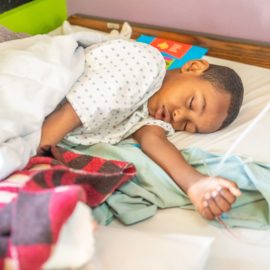 We are excited because Baraqo was able to have his surgery today. Before he was given the anesthesia, we are told that he was very inquisitive and made everyone in the operating room laugh. Baraqo didn’t cry as you would expect many kids to cry. Baraqo had a small procedure that will help release his foot and allow him to put it straight. We asked the doctors if Baraqo would have a leg-lengthening procedure later, but they didn’t think this would be possible since Baraqo’s leg was seriously damaged by the bullet. They told us that it is something to consider, and they will look into it moving forward. Please thank God for Baraqo’s procedure and ask for strength for Baraqo to go through the healing progress. 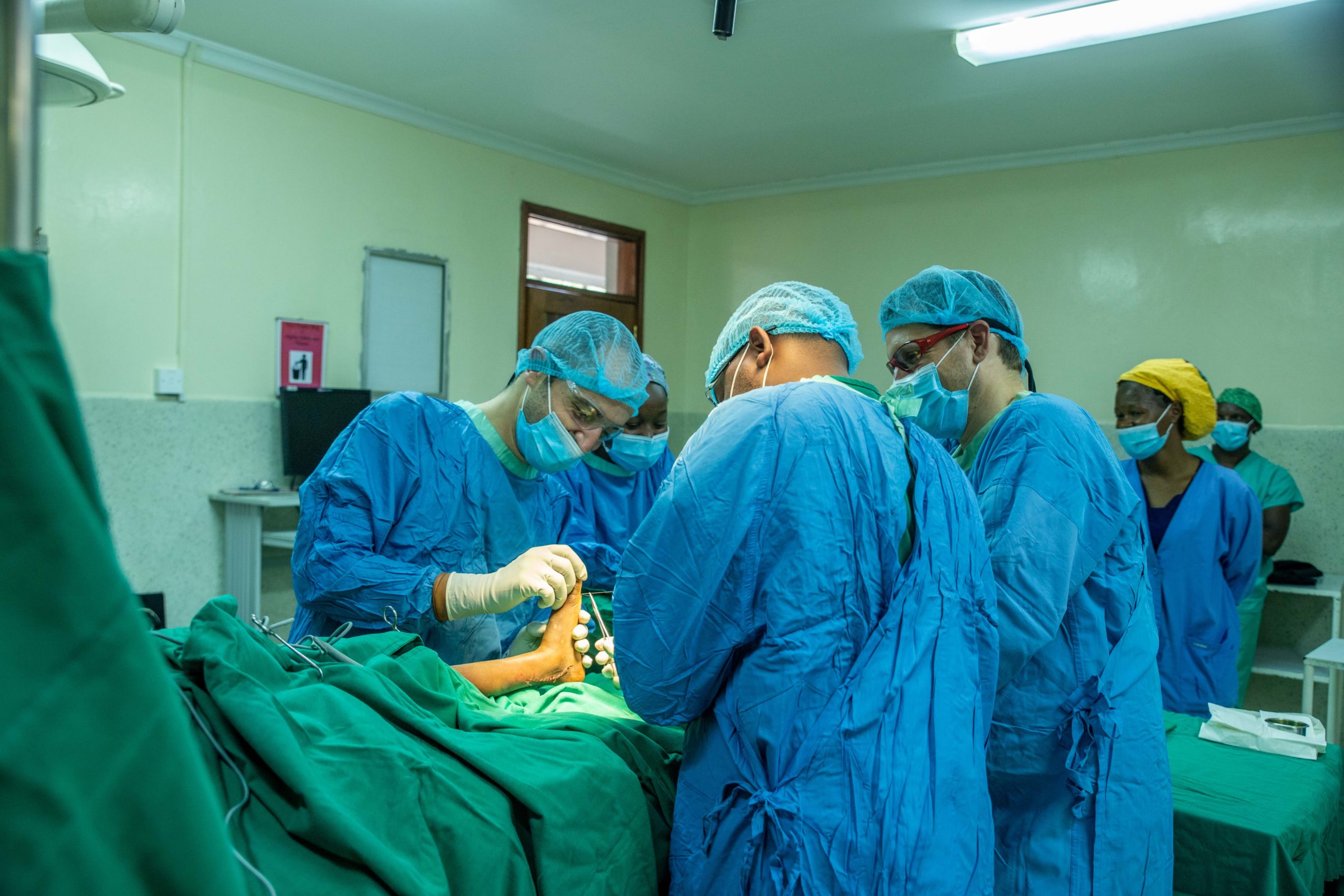 Baraqo is so energetic! He has already made so many friends at CURE Kenya even though he hasn’t been here very long. We love his attitude and personality. It is so hard to imagine that such a fun kid went through such a difficult experience. We are happy that Baraqo is at CURE Kenya and we pray that his surgery will be transformational and his life will be made better through this. Please pray for his surgery and his time at CURE Kenya. 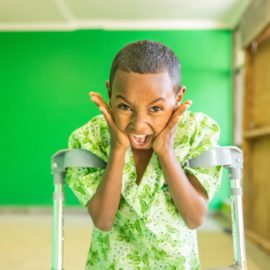 Send a Message to Baraqo

We'll deliver your message to Baraqo at his hospital bed. View get well messages

There are currently 239 different people who are a part of Baraqo's support community. What about you?

This is Baraqo's 1st procedure.

Baraqo has had 1 procedure at CURE Kenya. Below are the before and after photos for each procedure. 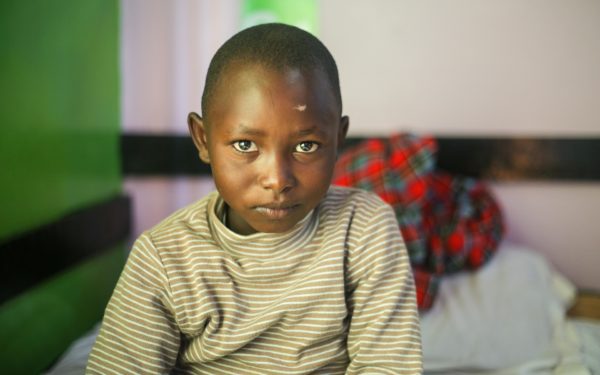 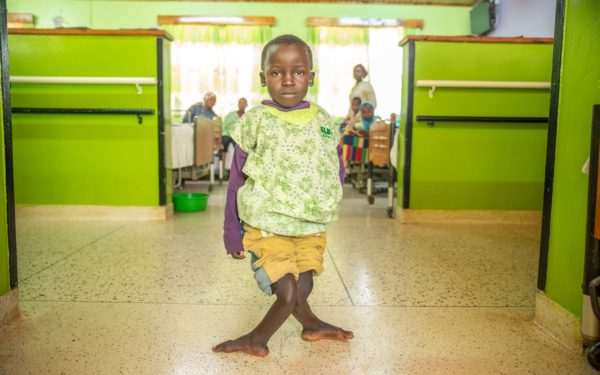 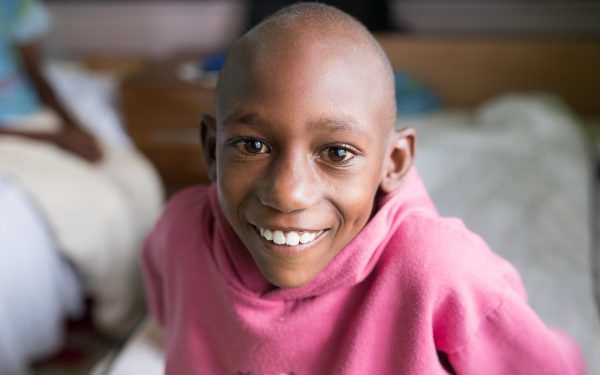 We're sending your message for Baraqo to CURE Kenya.

Every month, be a Hero to a child at a CURE Hospital, beginning with Baraqo. Real-time updates will let you see the impact of your giving monthly!

Your generosity will provide major underwriting for a surgery at CURE Kenya while you receive real-time updates on Baraqo.