“I never would have thought that the reason why he woke up crying that night was a snake bite.” Samuel, Duncan’s dad, told us.

Duncan is a five year old boy who is about to turn six. He was born normal without any form of disability.… Read more

“I never would have thought that the reason why he woke up crying that night was a snake bite.” Samuel, Duncan’s dad, told us.

Duncan is a five year old boy who is about to turn six. He was born normal without any form of disability. One night though, when everyone in Duncan’s house was asleep, they were woken up by a very loud cries of pain from Duncan. The first person to respond was Duncan's mom who went to see what the problem was. When the crying wouldn't stop, Samuel joined them. They couldn’t figure out what was going on. They concluded Duncan probably fell while playing during the day and he was feeling some residual pain. Assuming it would pass, everyone went back to bed.

The next morning, Duncan was still crying and in pain. Confused and now very worried, they took Duncan to a nearby hospital where they were given no answers, but referred to a bigger hospital. At this point, Duncan’s leg had started to swell very badly and looked as if it was beginning to die. The doctor at this bigger hospital told Samuel that Duncan had been bitten by a snake and needed to be operated on immediately in order to stop the venom from spreading to the rest of his small body.

Three weeks later, Duncan was discharged from hospital, out of danger. When they were back home, Samuel was very cautious and checked the house over to make sure there were no more snakes. Duncan continued growing and Samuel started noticing a change in his son’s leg. It started bending oddly down by Duncan's foot. Samuel was surprised to see this and wondered what it was. He took his son back to the hospital and was told it was a complication from the snake bite. They also told Samuel Duncan's condition was treatable, but he needed to pay for the contracture release procedure. Samuel couldn’t raise the money being asked so he made the call to live with the disabling condition.

Thankfully, Samuel heard about our CURE Kenya mobile clinic that we were holding near his home. He heard that we were seeing kids living with disabilities and he decided to give it a shot and come see if Duncan could benefit from our services. We were able to share the good news with Samuel that we can indeed treat Duncan's condition! Duncan and his dad are now here and we are praying that his life will be transformed after this surgery!

Duncan had a rough day today at our mobile clinic near his home. He's been having some pain in his foot over the past few days so took off his bandage which was not a fun experience as the whole area is still very sensitive. The good news is everything looks good! We found his incision and skin graft to be healing well. He was bandaged back up and allowed to go home to continue healing up. The plan is to check in with him again in November! 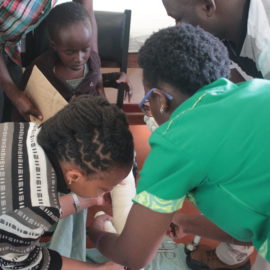 The sweet and smiley Duncan has come back to CURE Kenya ahead of schedule. Both the site of his skin graft and the site of his burn contracture release seem to be struggling to heal. Thankfully, we were able to thoroughly clean his wounds for him and we’ll see him next week on our mobile clinic near his home! 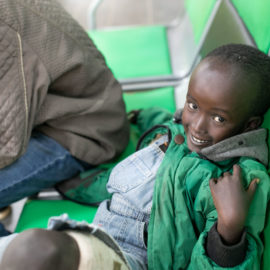 “Duncan is the kind of kiddo who can make friends with most anyone!” Okay, we’re quoting ourselves from yesterday, but really -- here’s the evidence: remember how we mentioned Collins’ dad in the last couple of days? Here he is. Meet Baba Collins! ‘Baba’ is Swahili for ‘dad’ and it’s fun that both Duncan and Collins have their babas around to keep them company. For Duncan, his baba will now be keeping him company as they journey home together. We know we’ll be seeing them both again soon! 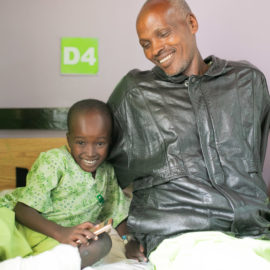 Pastor Philip was having a little fun teasing Duncan this morning as Duncan waited for a dressing change. Around this time, Pastor Philip was telling him to smile for the camera. Duncan was visiting one of his bed neighbors named Collins. It was Collins’ dad that Duncan was chit-chatting with yesterday. Duncan is the kind of kiddo who can make friends with most anyone! And we’re so thankful for a new friendship in Duncan’s dad’s life: a friendship with JESUS! Last week he said ‘yes’ to Jesus, and we hope this means that someday soon, he’ll help lead Duncan to say ‘yes’ to Jesus too! 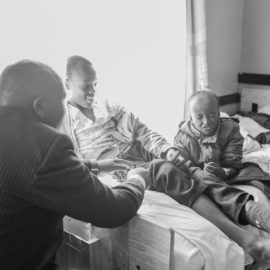 Duncan sat in his bed this morning, having a conversation with a dad in the bed next to his. He also took the time to practice writing his numbers, and he used his creative skills to do it: he wet his finger and ‘wrote’ the numbers on his balloon! He and his creative skills should be going home after another dressing change tomorrow. 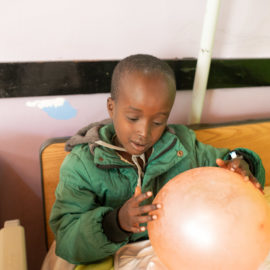 “Gota” is the word in Kenya for fist bump and that’s what we were given today by Duncan. Duncan went to the OR today for a dressing change and will hopefully go home soon with the knowledge that he’s healing! Please be praying over the next few weeks for his dad to think more about saying yes to Jesus! 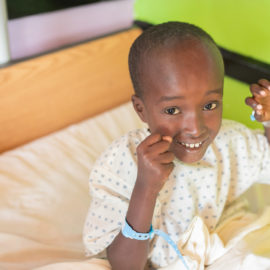 Spunky. That’s what Duncan was this morning. He gave Storyteller Naphtali an animated high five before having a conversation with Storyteller Elvis about whether he’d just drank tea or not. Then Elvis told him that if he heals, he’ll get to go to the second grade. We’re thankful Duncan is feeling well enough to be silly. We’re hoping tomorrow he’ll get to go to the OR for a dressing change and then he’ll be homeward bound for a few weeks! 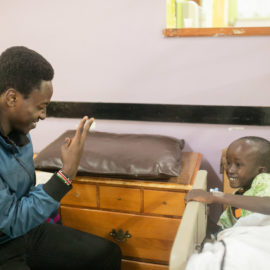 “Generally, we were sharing about the love of Christ,” Pastor Peter told us of his conversation with Duncan’s dad as Duncan rested in his bed. You see, Duncan’s dad used to go to church, but after moving, he stopped going. We’re so thankful he’s here with us now! He’s actually considering accepting Jesus as his savior. “He's giving himself time,” Pastor Peter explained to us. Let’s pray that this conversation and the Bible verses shared lead to him coming to know Jesus! 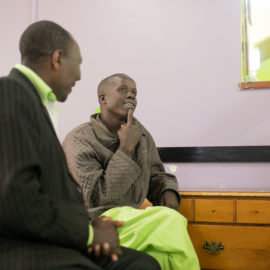 Before Duncan had his surgery, we hung out in the waiting area. He was feeling a bit cold so we brought him a blanket to keep him warm. Duncan has a really cute smile and we love it! His contracture release was successful and his foot is sitting nice and straight now. He needs to rest and recover and we are praying that his recovery process is smooth. Please pray that he doesn’t get an infection in his wound and that his recovery will be straight forward! 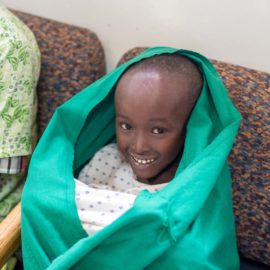 Take a look at Duncan’s sandals. His dad customized them so they wouldn’t hurt his feet every time he wore them. At the moment, Duncan only wears sandals because they are the easiest to manipulate so they fit him. This is about to change because of the surgery he is about to get here at CURE Kenya. Please pray for our new friend as he waits to go into surgery. We hope that by the time Duncan turns 6, he will be able to wear actual shoes! 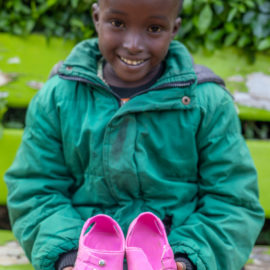 Send a Message to Duncan

We'll deliver your message to Duncan as soon as we see him. View get well messages

There are currently 156 different people who are a part of Duncan's support community. What about you?

This is Duncan's 1st procedure.

Duncan has had 1 procedure at CURE Kenya. Below are the before and after photos for each procedure. 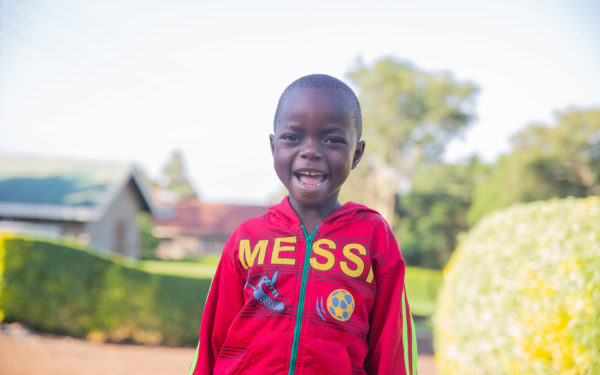 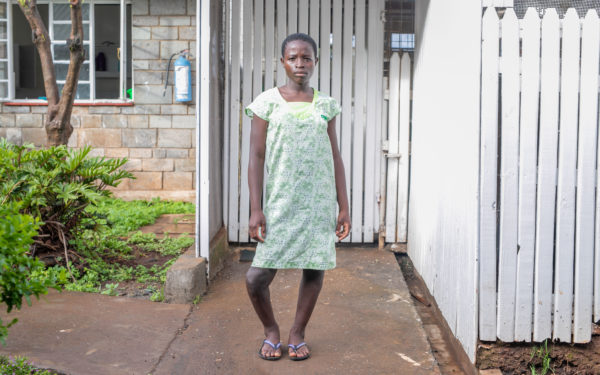 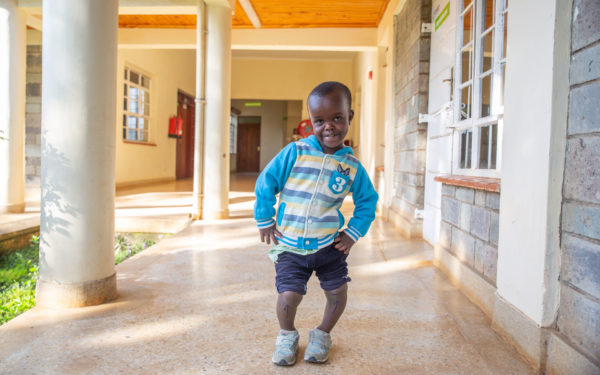 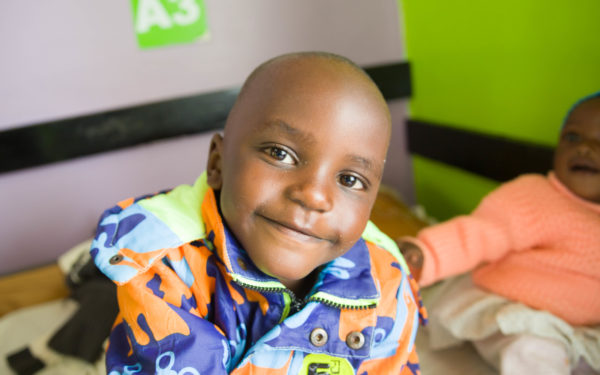 We're sending your message for Duncan to CURE Kenya.

Every month, be a Hero to a child at a CURE Hospital, beginning with Duncan. Real-time updates will let you see the impact of your giving monthly!

Your generosity will provide major underwriting for a surgery at CURE Kenya while you receive real-time updates on Duncan.