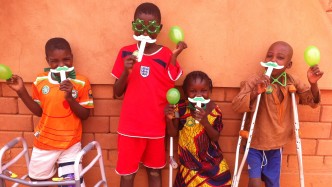 What do you do when you get a bunch of St. Patrick’s Day party supplies donated to the hospital? Have a photo shoot. Obviously. One of the kids said, “Are we celebrating CURE?” when he saw all the green stuff. I said, “Sure!” because we’re always celebrating over here. With each healed child, we celebrate. So happy St. Patty’s Day, and happy CURE Day, too!

Hadiza still had hope for Saratou, but she never actively looked for a hospital or clinic where she could be treated. Hadiza knew that even if she took Saratou to the hospital and she could be healed, she would never be able to pay for it. But one day, she heard about the CURE hospital in Niamey on the radio.

We hear it over and over again. Almost every patient we talk to at the hospital tells us the same thing. Their disability is seen as a curse. It is something terrible and unfortunate that has happened to them, but also something for which they feel responsible. In many cultures, having a disability is viewed as a sign that you must have done something wrong; you must have somehow invited it upon yourself.

Finding Hope in Niger, Part I

Hadiza had a daughter named Salama. She raised Salama alone in the town of Ayarou, a town on the river near the border of Mali. Life was not easy, but Hadiza did all she could for Salama. She made porridge at home and sold it on the street. She made enough money to keep them alive, but not much more than that. Hadiza loved Salama, but Salama grew up and one day she left. She went away to Benin, and Hadiza barely heard from her at all.

Abdoul-Wahab’s parents had no idea that a cleft lip was something that could be treated or healed through surgery. Once they found out, they made a long and difficult journey to healing.

The other day, while making our daily rounds in the patient’s ward, we met a lady who had come to the hospital with her son. He needed anoperation on his foot, and had just gone into the O.R. She said that she wasn’t nervous about the surgery, but she looked like she could have used […]

The World is Dark “We look for light, but there is darkness!” (Isa. 59:9 NKJV) Recently, there has been a lot of darkness around here. Some of the worst power cuts in years have left the city of Niamey in the dark, and a number of terrorist attacks (in the north and in Niamey) have caused a lot of fear. […]

Hannatou, the hospital social worker, does an amazing job with the patients, and especially their families, during their stay at the hospital. Many of the mothers who accompany their children get to participate in all kinds of activities like cooking, sewing, jewelery making, and knitting. One of the projects Hannatou does with them is knitting winter […]