For the past five years, Dr. Jun Valera has made a fall pilgrimage to Richland, Washington. A town of 60,000 people in the middle of the desert landscape of eastern Washington state, it’s not exactly a prime tourist area. But except for a brief stop at Pike’s Market in Seattle, Dr. Jun’s objective isn’t tourism; it’s to reunite with his second family, the doctors that make SIGN Fracture Care International a success.

SIGN, a nonprofit organization founded in 2010, manufactures surgical implants and instruments used to repair arm and leg fractures. These implants are either donated or provided at cost to hospitals in underdeveloped areas. What makes the SIGN system unique? SIGN designed the implants for use in facilities where C-arms (real-time x-ray) or power tools are unavailable. While Tebow CURE Hospital surgeons have access to modern technology, many areas do not, especially in rural areas or in places reeling from the aftermath of natural disasters.

The SIGN system is not commercially available, but when Dr. Jun was a resident at Southern Philippines Medical Center (just up the road from Tebow CURE Hospital), he was exposed to the program and was hooked. He tells us how he jumped at the chance to become the “Traveling SIGN Surgeon” for the southern Philippines:

“In 2009, while a resident at SPMC, I was in charge of reporting and uploading SIGN data and cases. I became the program coordinator until I graduated, and normally, that would be the end of the relationship. But I caught their vision and already had a relationship with the organization, so they allowed me to start a new program under my own name. I traveled around the island, doing surgeries at several hospitals, before settling at Tebow CURE Hospital.

“I first attended the SIGN conference in Richland in 2011. The conference is helpful because we are always treating difficult fractures. I get to share experiences with surgeons from other developing countries. We all have challenges, and we get to see how others have overcome those challenges. A lot of “big names” in the world of orthopedics attend, and they describe how to give the best treatment in our areas. They understand that we have limited resources. For the past two years, they have rented a mobile bio-skills lab, which is set up in the back of a truck. It’s a virtual operating room, with hypothetical cases set up. There are mentors available to coach us through scenarios.” 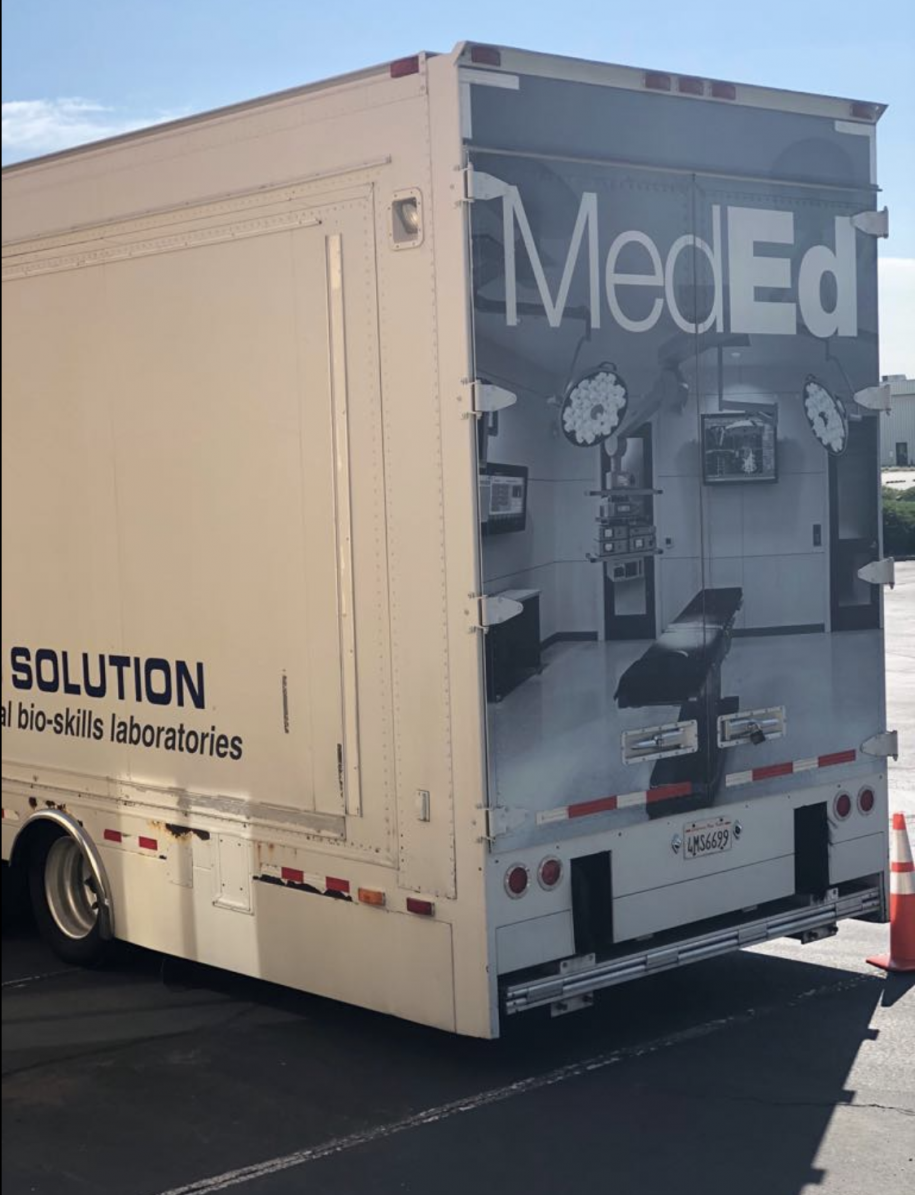 The unique technology used by SIGN Fracture Care International is just one thing that sets the organization apart. SIGN spans 50 countries and has provided tools for over 220,000 surgeries, but it’s a tight-knit family.

“We share experiences and even mistakes, but first and foremost, it’s a group that loves to serve people and loves to learn. Conferences are like a family reunion! The variety of cases and experiences are made up of a collaboration of people trying to do the best with what’s available. It’s inspiring to see surgeons helping their countrymen. I know a doctor in South Sudan who travels by helicopter to gain experience and help others. Others work in war zones. It keeps us from being proud, and I get to encourage others with our experiences.”

Dr. Jun may not take a helicopter to work, nor does he work in a war zone, but his experiences are inspiring as well. He has performed several-dozen SIGN surgeries at Tebow CURE Hospital in the past four years, ranging from inborn bone deformities to operating on the victims of motorcycle accidents and adventurous kids who fall out of fruit trees. To his patients, his actions are heroic. Not only is the efficiency of the process remarkable, but the accelerated recovery time versus “regular” casting is impressive as well. Due to the strength of the SIGN nail, pressure is taken off the bone while it heals, allowing patients to take steps within just a few days of surgery.

Joanna and her cousins were playing on a tree limb, and when it broke, so did Joanna’s leg, leaving her unable to walk. Not only did she find healing through Tebow CURE Hospital and SIGN International, but she also found a new friend in Dr. Jun.

“It may feel selfish for me to feel this way, but it makes me feel purposeful. It makes sense of what I do. Now I understand the purpose of my working hard and studying for so long. I feel justified seeing these kids, who would have probably been avoided by society, be transformed into someone else. We call it the ‘SIGN Transformation.’ It gives us hope; it gives them hope. It blesses me.” We think the entire SIGN family would agree, and we are honored and privileged to partner with them. 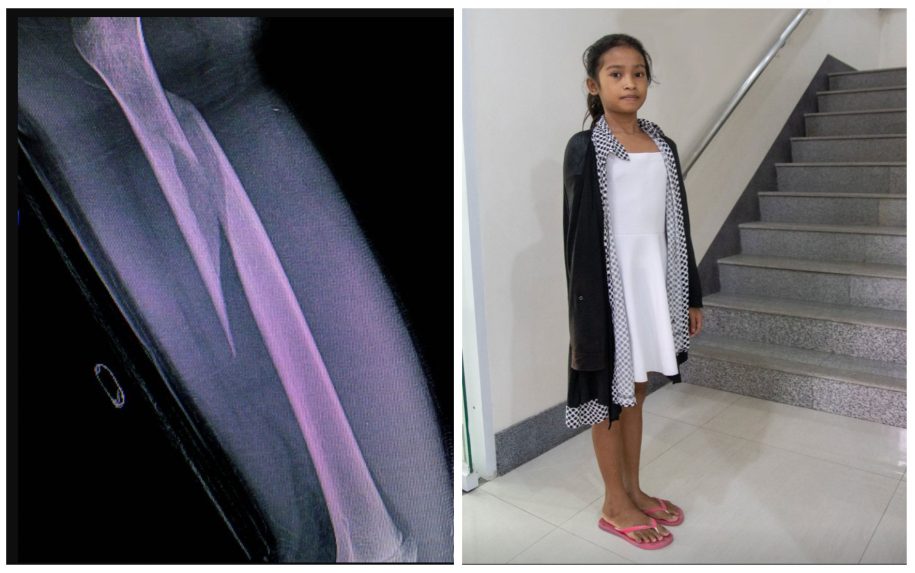 Melquie suffered from a broken leg for over a week after a bicycle accident. The first hospital refused to treat her without a large down payment. Her family found hope at Tebow CURE shortly afterward, and now her life has returned to normal!

Alvin, an avid soccer player, broke his leg during a game. From left: before after, and Alvin back on his feet, just two weeks after surgery! 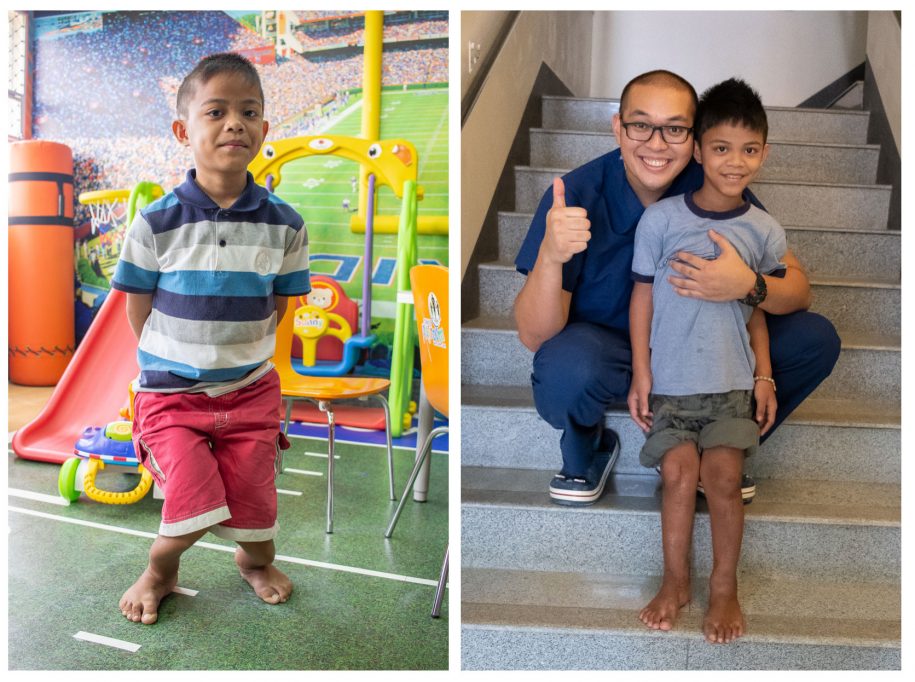 Daniel’s leg deformities were inborn, causing him a lot of pain and fatigue when he walked. He had SIGN nails put in both his lower and upper legs after Dr. Jun cut his bones to rotate them into a straight position. Now, he’s standing tall! 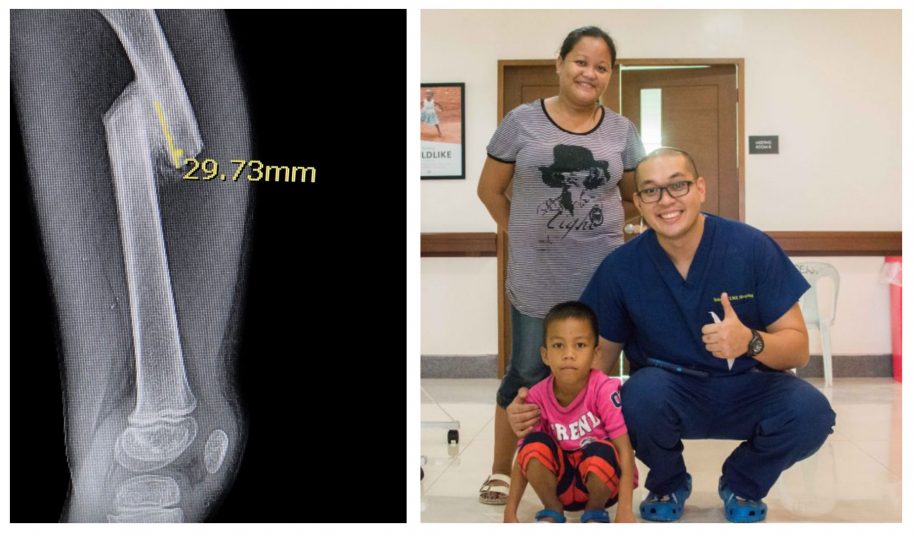 A fall from a tree not only shattered Bryll’s femur, but it also sidelined his ability to walk. Left: Before surgery. Right: Bryll and Dr. Jun demonstrate the “SIGN Squat,” which shows that his leg has healed!