Dr. Micheal met with her and told her the prognosis.


“I felt bad and thought someone could have done witchcraft on my child,” said Namubiru, who also goes by the name Viola. Her child, also named Viola, was born at home at the end of last December. Soon after birth, she noticed a swelling on baby Viola’s back and took her to a local hospital. She also became sick, and the two of them were soon admitted.

“The people at the hospital said, ‘We don’t work on this condition. Go to Mbale.’ I felt relieved because I got hope that the child would get healed and helped from this side,” said mom Viola. She was still feeling sick and weak, so her mother Fausta traveled with them to CURE Uganda. 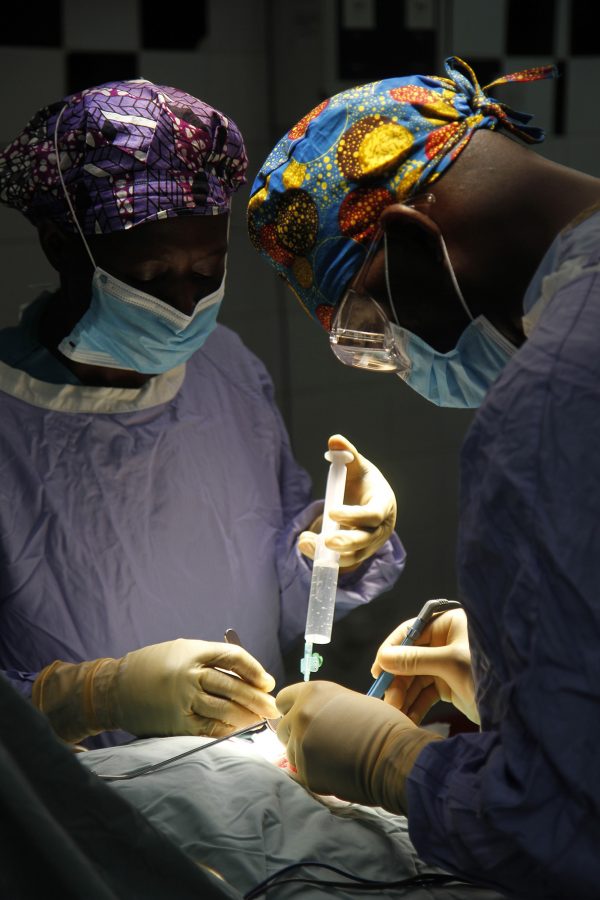 “I had a feeling they (CURE) would treat the child and [she] would be well,” said Viola.

Baby Viola was admitted into the hospital in early January and diagnosed with an infected myelomeningocele as well as sepsis. Her doctors did blood work, started antibiotics, and placed an NG tube into her stomach to help her with eating. Her mom struggled at first because she was not use to the way the hospital operated. These challenges were made worse by the stress of taking care of a sick newborn and being ill herself. A few days into their stay, baby Viola was taken into surgery. 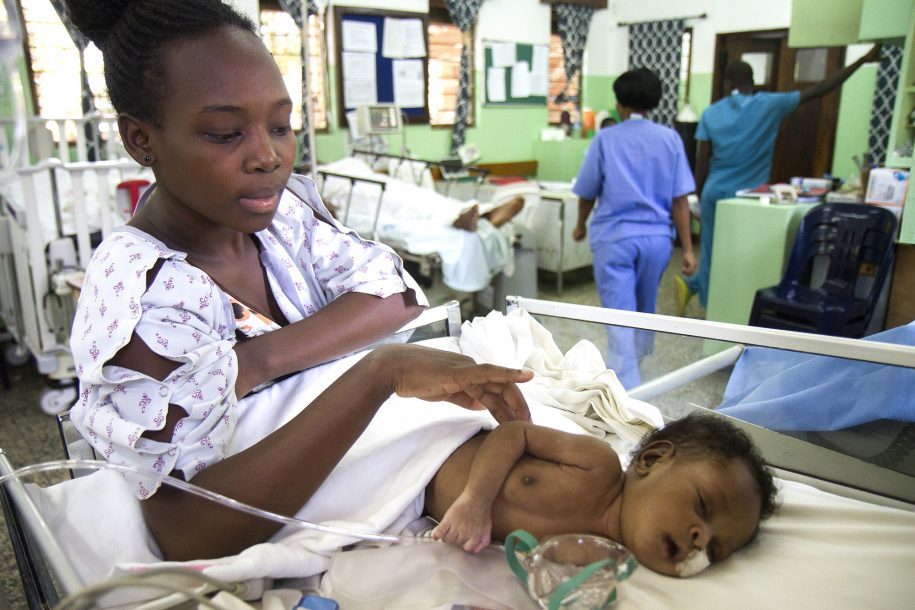 Viola touches her daughter who was brought back to the ICU after she began feeding and breathing poorly, Jan. 23.

“The day of the surgery for me was good because the child came back well. I was very nervous. She (Fausta) was also nervous for me. I was sleeping while my mom was outside,” said Viola. 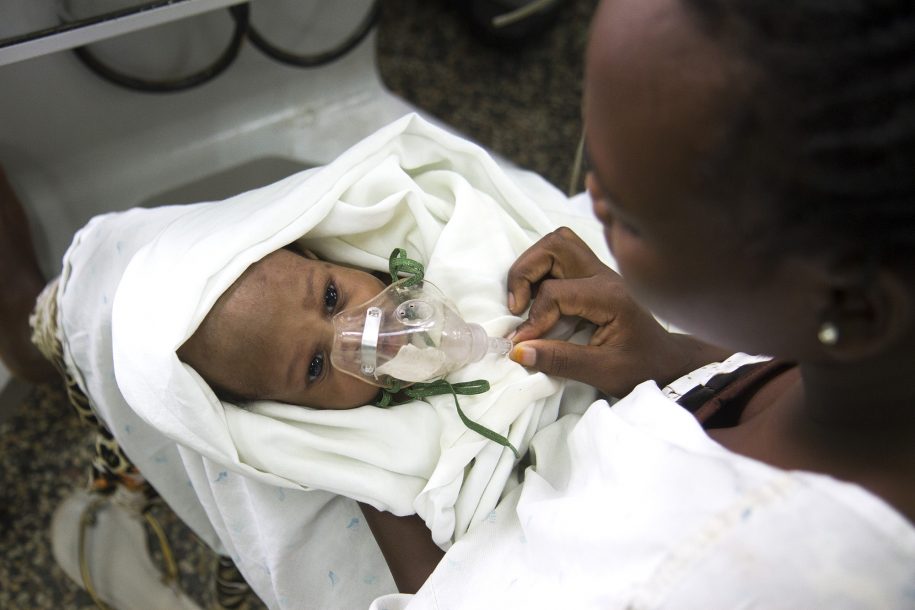 A few hours after Dr. Justin closed baby Viola’s back, she was transferred to the ICU back to her mom and grandmother. The tiny infant stayed in the ICU for two days before being transferred to the ward. There, her doctors continued antibiotics, monitored feeding, and taught mom to dress the wound on her baby’s back. For one week, they stayed in the ward until Viola was transferred to the ICU for oxygen therapy. Then, the following day, they were sent back to the ward; electrolytes, urine analysis, and a CBC test were done. Then a few days later, baby Viola was back in the ICU with her condition suddenly worsening with reports of seizures and onset of several other conditions. 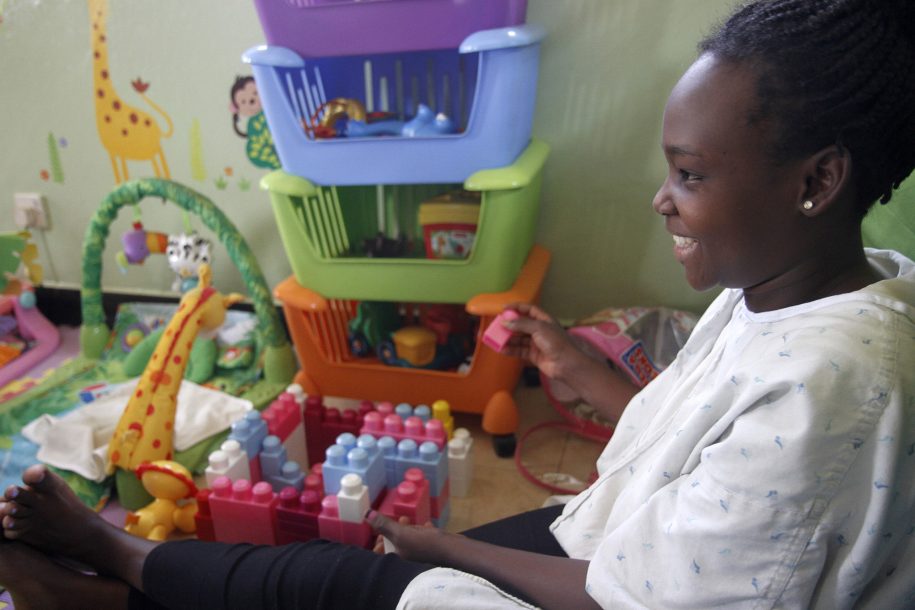 Each morning the spiritual center playroom opens for the families in the hospital. Viola’s favorite activity was playing with the building blocks, Feb. 9.

Viola would spend the next month in the ICU on and off oxygen, and on and off different medications as her medical team attempted to heal her. Viola was under close observation. Not only was her breathing being very closely monitored, but also her feeding, Her nurses weighed her daily. Her weight fluctuated around three kilograms. With her oxygen levels not improving, her doctors thought of possible causes. On February 6, Viola was taken for an echocardiogram to see if her heart was causing the problems with her oxygen desaturation. The test confirmed her doctors’ growing suspicion and showed a patent ductus arteriosus, or PDA with left to right shunt, which results in the blood not being oxygenized before traveling through the body. Doctors told mom that baby Viola would need to go to a heart expert once she became stable. 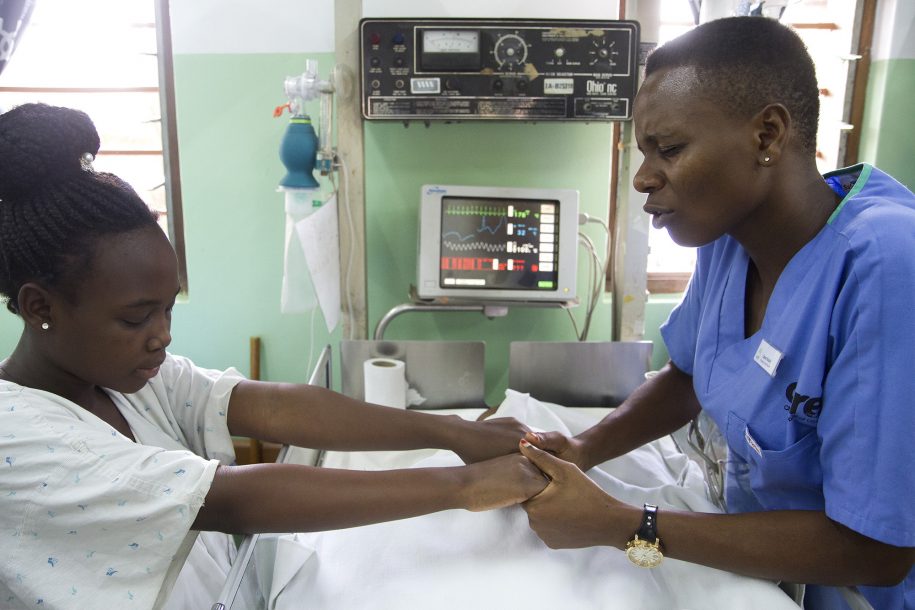 Viola and nurse Caren pray in the ICU Feb. 12.

On February 9, the day started as routine. Viola washed laundry and sat outside the ICU with her friends. Then, she went to the playroom and built a house out of building blocks. The day then took a drastic turn with baby Viola’s condition was worsening as she was having severe respiratory distress, persistent apneas, and fevers spiking to 104 degrees. Dr. Micheal met with her and told her the prognosis. 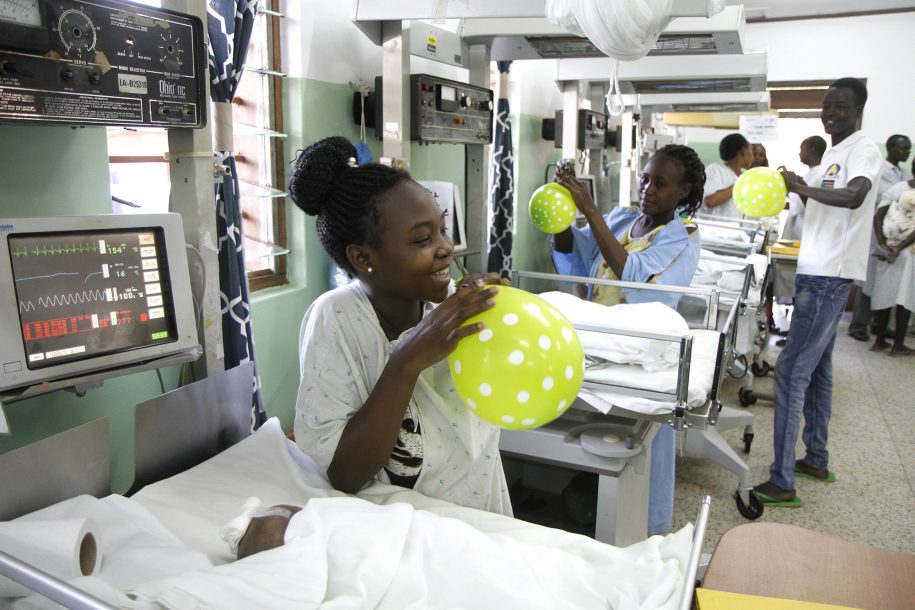 On Valentine’s Day balloons were handed out to the families in the hospital. Viola laughs as she inflates hers, Feb. 14.

“At some point, the child was unable to breathe well and they were trying to pump air into the child,” she said.

Meanwhile, Annet of the Spiritual Center sat at the reception desk in the Administration Building. Winnie, also from the Spiritual Center, visited Annet and told her she was going to the ICU. Annet became troubled in her heart and called the ICU for more information, and was told baby Viola was in critical condition. She went to the ICU to pray for Viola. She gathered three nurses around the bed. 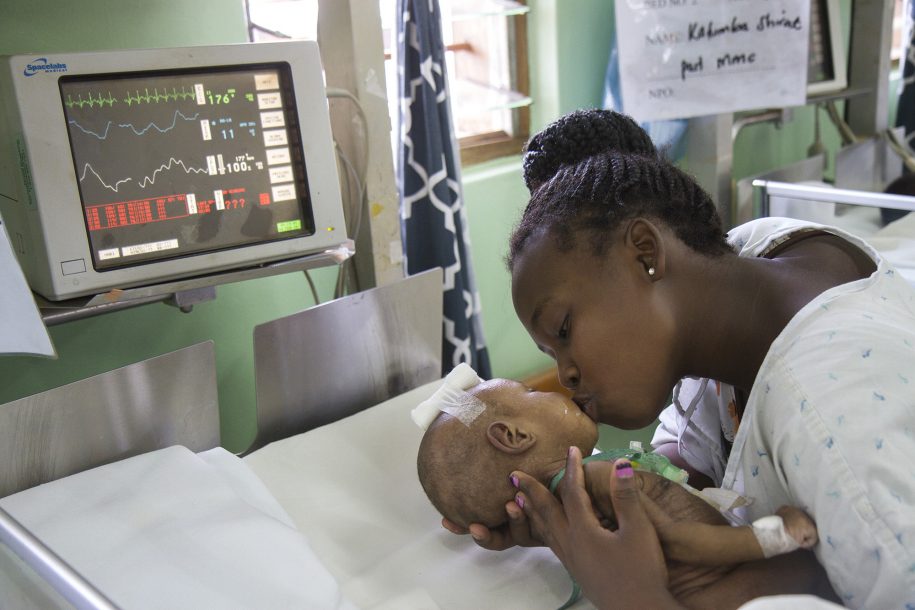 “It was Herbert, David, and Caren. The two gentleman came around the bed. Herbert washed his hands with alcohol and placed his hand on the baby, ‘We’re here to release rhama word (word of God),’ said Herbert. We came around the bed. We began praying openly. God, you created this child in your image and all you see is perfection in her. So we, too, begin to see with the eyes of faith. We see perfection in this child…” said Annet.

Nurse Jane visits Viola, teasing her, asking why she has taken the baby’s balloon, Feb. 15.

Viola was on Annet’s mind the two following days, which Annet had off. Upon returning to CURE, she quickly inquired about the condition of Viola and was relieved to hear that she was still alive.

“I had hoped the baby would be well. That is what kept me going,” said Viola, her mom.

“She was strong. I only saw her break down once, but she kept strong,” said Dr. Micheal. 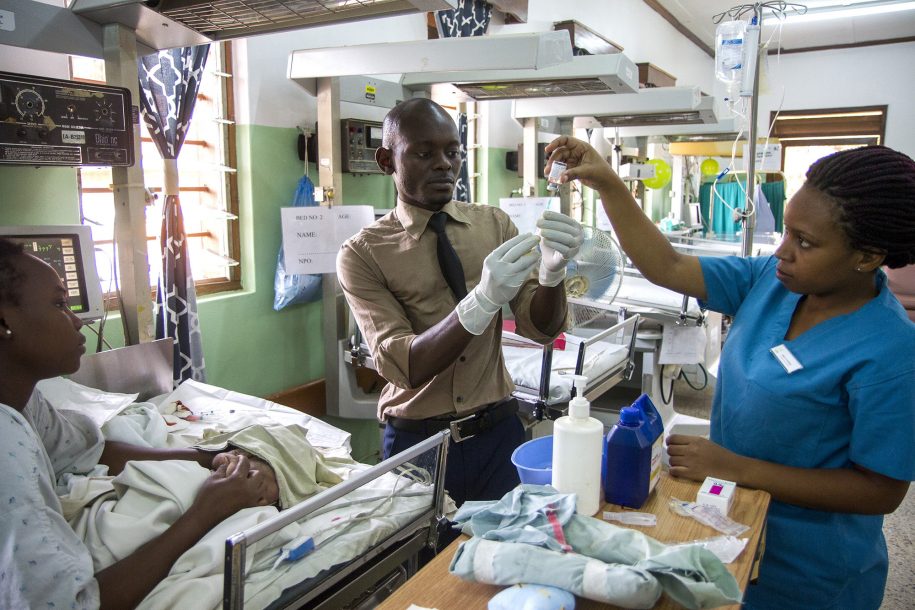 Over the next few days, baby Viola had ventricular taps and cerebrospinal fluid was gathered for testing. Antibiotics were administered directly in to her head as well as by an IV line. Her doctors focused weaning her off oxygen, treating her sepsis, and preventing hydrocephalus from occurring by treating the infection in her brain. By February 20, Viola had been off oxygen for a few days and was transferred out of the ICU. While in the ward, she got to enjoy the playroom where she laid under a mobile while her mother colored. However, by the end of the day, baby Viola was transferred back to the ICU and placed on oxygen. Ventricular taps continued as well as IV antibiotics. But she was winning the fight! By the end of the month, she had finished her antibiotic regiment and was off oxygen. 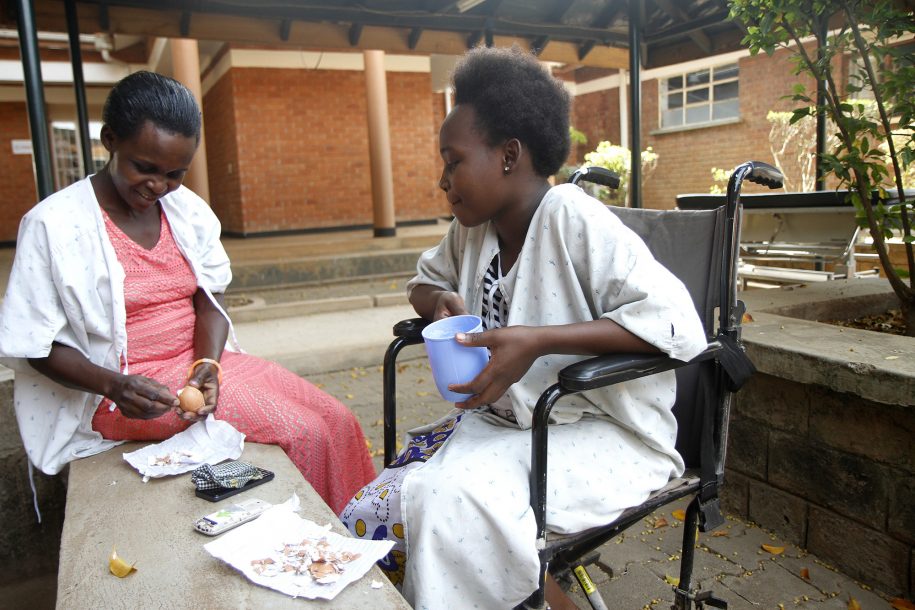 Esther brought eggs for her and Viola to share outside the ICU. Feb. 20.

During Viola’s time in the ICU, she made friends with many of the nurses.

“She didn’t nurse much for us, but that connection of love between us. When Jane was eating something, she would share. She use to do it (care for Viola) well. The jokes she told made me to laugh so much,” said Viola. Jane would tease Viola asking her why she was named after her baby. She would refer to mother Viola as her daughter and ask how a baby could have a baby. 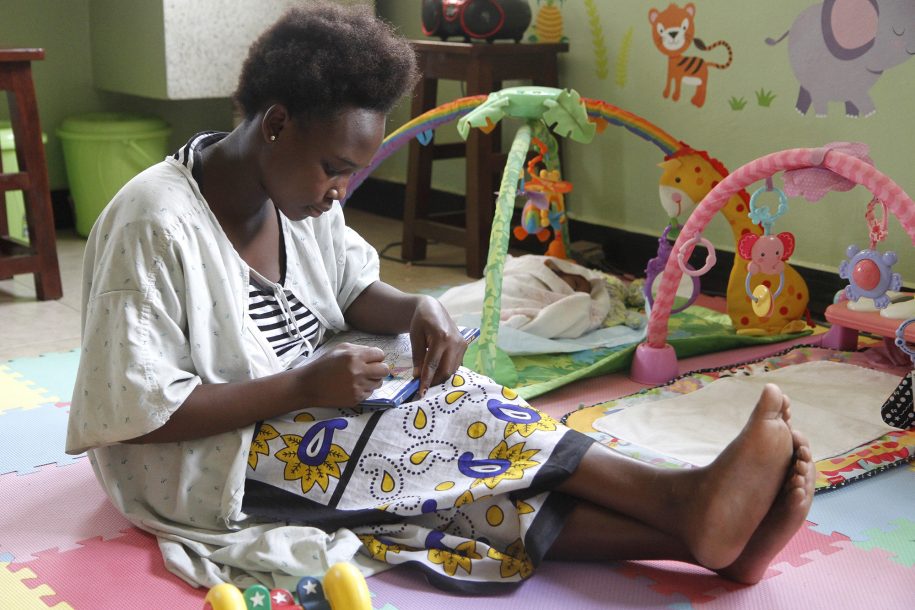 Viola colors in the playroom as her daughter lays under a mobile. Feb. 20.

“She is about the age of my last born. I was just seeing my daughter having a problem in the hospital alone. At times, she was very depressed, but I would talk to her and she would laugh. When you would talk to her in a laughing way, in a loving way, she feels encouraged, feels loved. She feels accepted and forgets her problems,” said Nurse Jane. 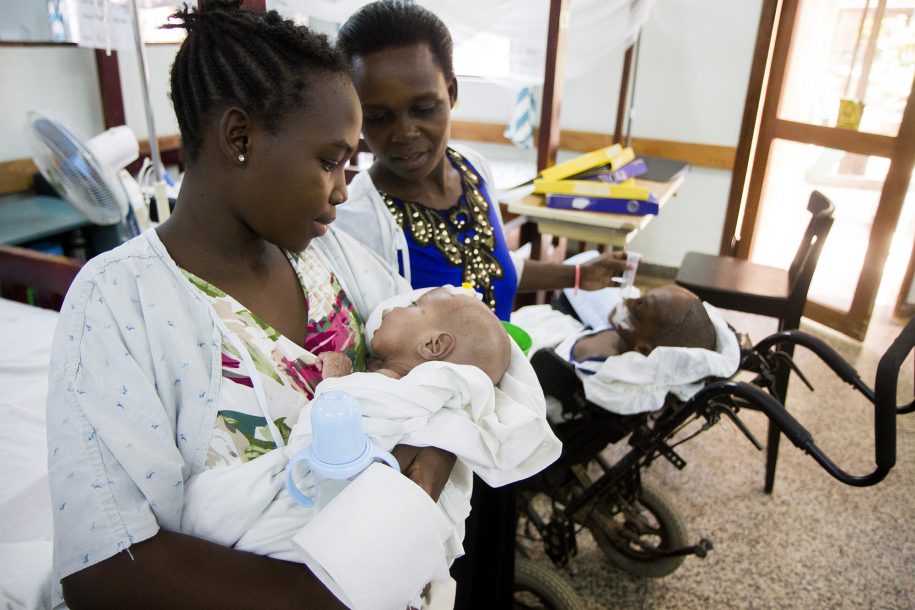 Viola and Esther look at baby Viola after they have been transferred out of the ICU and into the ward. March 1.

Along with her friendship with Jane, Viola had several friends that stood out to her: mother Deo, mother Prossy, mother Sulaiman, and mother Romney (Esther).

“The relationship with other mothers was good. What made it good was they encouraged each other,” said Viola.

“She left here with enough courage to take care of the baby. I know God will look after her wherever she is,” said Jane.

After spending 55 days in the hospital, baby Viola was discharged home with a referral letter to get Viola’s heart examined. At the time of her initial discharge, baby Viola had spent 83 percent of her life at CURE.

“I would encourage the incoming mothers to be strong. That they will have surgery and be fine,” said mother Viola. “I just want the child to be well. Pray for the child to get well.” 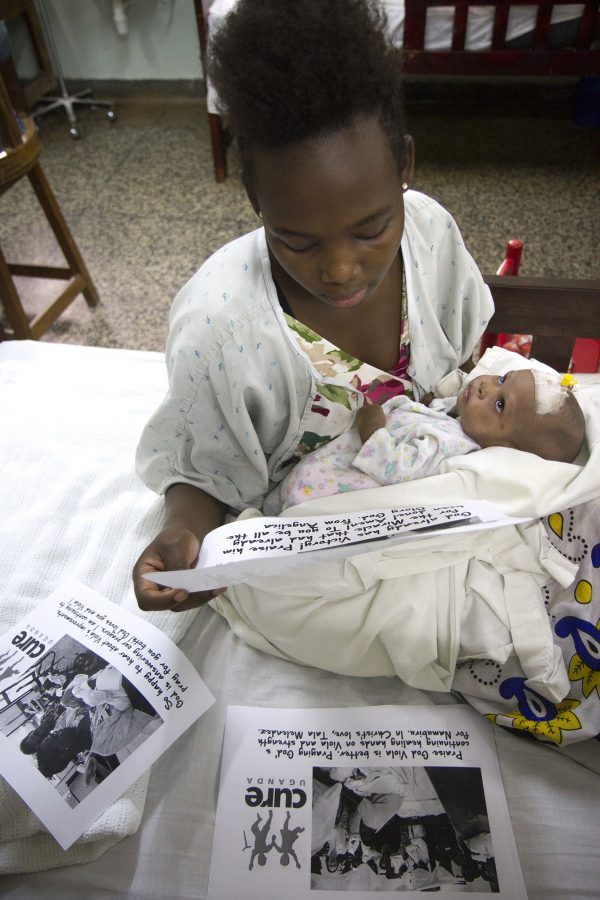 Viola holds her daughter as she reads get well messages. During their stay, they received over 100 messages. March 2.

Update: Baby Viola was readmitted in April for another surgery. She is due for a follow-up appointment. To learn more about the latest in baby Viola’s journey, go to Viola’s CUREkids page.