Two brothers: From leprosy to healing

If you came to CURE Kenya and asked about patients by the name of Joseph and Bernard, you would probably get a strange look. If, however, you came asking about the two brothers from Nakuru, then many would know them.

Fours years ago in February 2014, the two brothers came to one of our mobile clinics in Nakuru. They could barely walk then.

“We had sticks that had been improvised to work as crutches. Our feet would bleed as we struggled to walk,” Joseph, the younger of the two, told us.

Excruciating is the word that describes their struggle with leprosy over the years. What had started as a small wound on Joseph’s toes turned out to be a nightmare for both of them. For Joseph, this ordeal started when he was just nine years old in 1999. For his brother, it wasn’t until 2007 that signs of the disease started to show. 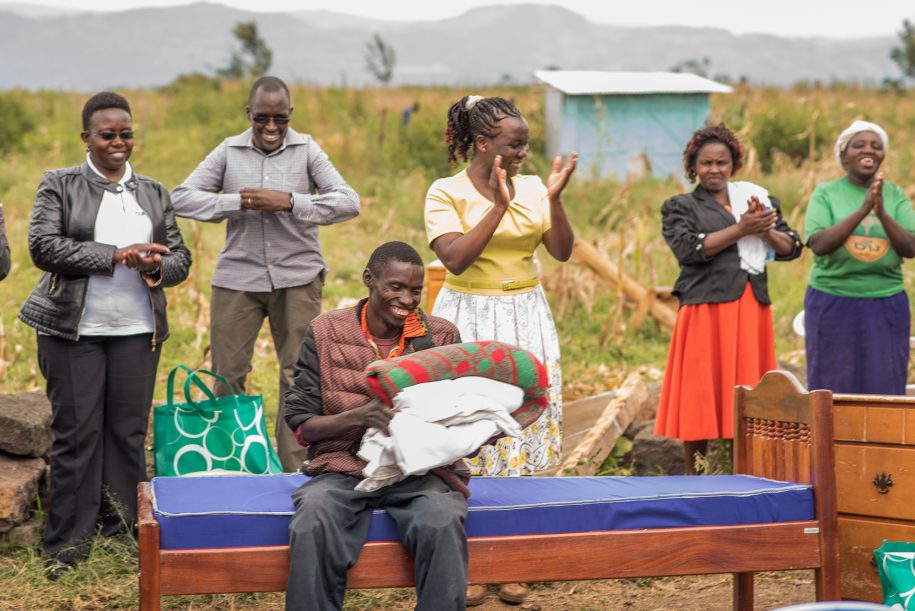 Bernard receives a bed and bedding from the CURE Kenya team!

Throughout the years, the brothers were admitted into hospitals more times than than they care to remember. After going from hospital to hospital seeking help, they finally met one of our social workers around their home region. Our social worker Livingstone was the one who directed them to the Nakuru Mobile Clinic.

By the time Bernard and Joseph came to CURE, the wounds had gotten so bad that their legs had to be amputated to avoid further spread of the disease. The first and second amputations were done in 2014. This was, however, a major challenge. These two kept coming back to the hospital month after month due to new wound infections. Both of their amputations had to be revised.

“They kept coming back with wound infections, and even the coming back was a problem. They would call about the infections, but it would take a while for them to get to the hospital, as getting money for bus fare was always a struggle. So, by the time they got here, the wounds would be so bad,” said Kimeu, from our outpatient department.

Joseph couldn’t contain his tears when he saw the gifts the team had brought him.

In response, the Spiritual and Social Work departments planned a visit to the home to find out why these two brothers had reoccurring infections. What our staff found was shocking. The two boys were living in appalling conditions.

Joseph and Bernard’s mother had passed on a few years prior in 2006. After their amputations, their father left them. It was just the three of them: Joseph, Bernard, and another brother. Sick as they were, they could only look to their other brother for provision. There was no proper shelter for them. They were sleeping on torn rugs on an earthen floor of what could barely be called a house. Their brother had to drop out of school to get to odd jobs to provide for them. The responsibility was overwhelming. Sometimes, this family would go for days without a meal. 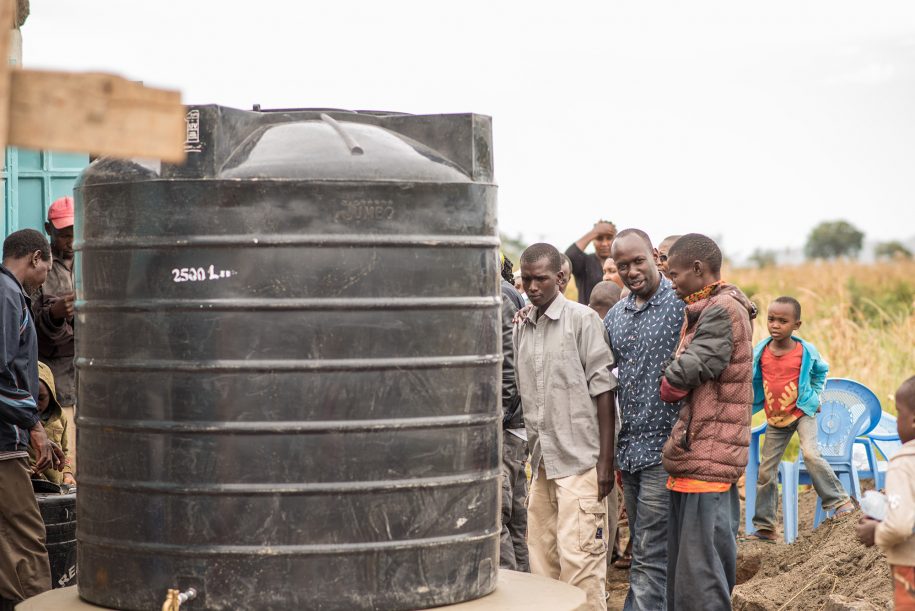 The situation got so bad that at one point, Joseph even attempted to commit suicide. Our Spiritual Team walked with him through that period and shared God’s love with him by praying with him.

“When I came to CURE, I didn’t see a reason for living, but the guys there took me like I was their son and walked with me through the whole journey,” he later told us.

Moved by the situation, the co-workers that visited this family came back to the hospital and requested that we all join hands to help these brothers beyond the medical needs. CURE team members put their heads together and decided that building a simple, but decent, shelter for them would be something the hospital could do to help restore these two broken souls.

Our Social Work Department also engaged with the neighbors to see how these two could be integrated in the local community so that the transformation could be sustainable. It was important for this family to have a sense of community belonging. 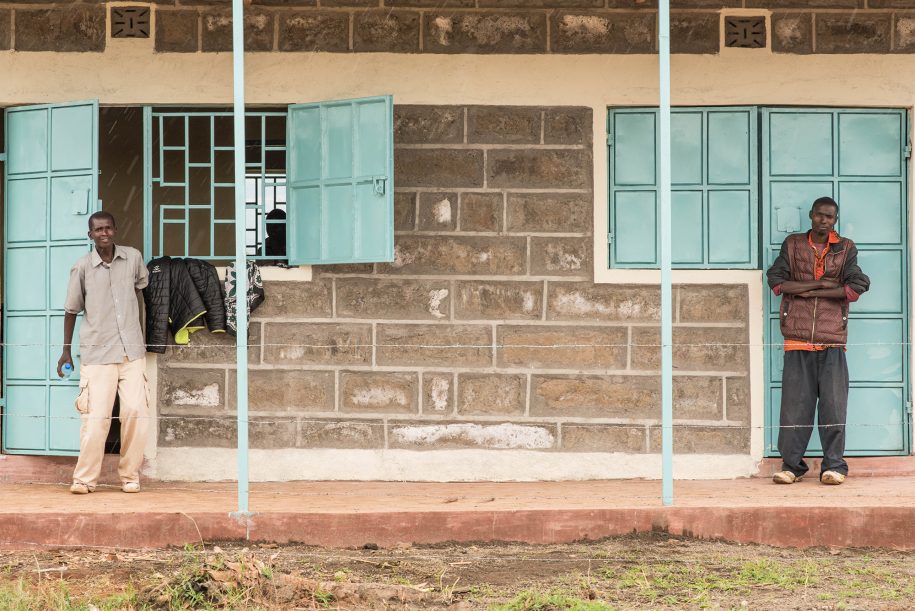 Joseph, left, and Bernard, right, pose outside their new residence.

In the fall of 2017, a team of 19 people from the the hospital started on the 150-kilometer journey to the village that Joseph and Bernard call home: the village of Banita. The visiting team was loaded with lots of gifts. A small structure had been set up on a small piece of land that their father had left the family before he departed. This structure would serve as a home for Joseph and Bernard. It would also double up as a shop where they could do a retail business to sustain their lives.

Tears of joy were shed on that day as these two brothers gave their testimonies of how far God had brought them: from a place of no hope to a place where they had friends they could count on. Neighbors testified of how these two brothers had stood by each other through their toughest moments and how they had been a blessing to most of them.

They had joined a nearby church. Bernard was part of the church choir and Joseph was actively involved in serving. Some of the church members also joined as we celebrated these two brothers and God’s work in their lives. 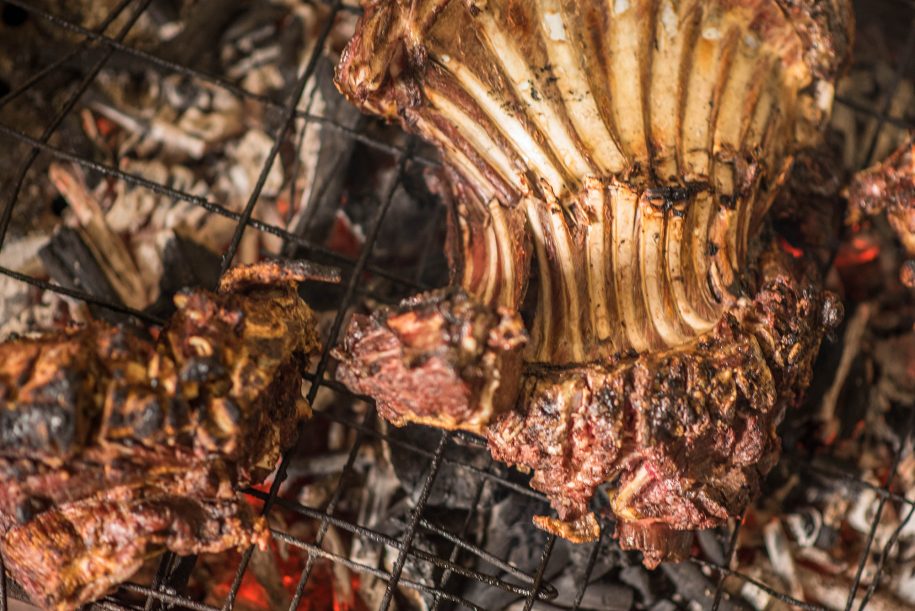 Some fresh ribs were roasted in the celebrations.

Joseph and Bernard have been through so much together. They have learned how to encourage one another. Knowing what the other person was going through made them each other’s best encourager.

“We would sit outside the house. I would look at my brother and ask him why all this was happening to us. Is it because we have sinned? He would say to me, ‘Worry not. Let’s wait on God and see what He has in store for us,'” Joseph said.

Through the years, we have seen that brotherhood bond grow even stronger. It’s a bond that has helped them go through the toughest times of their lives.

“We have seen so much change in their spiritual transformation. We have discipled them through the years they were at CURE. Clearly, they are not the same people they were fours years ago,” said Philip, Spiritual Ministry.

“At CURE, we found hope. We found healing. We found a family,” they said.