Pastor Simon Peter and Enid pray for Glorious as she accepts Christ.


On an early July morning, after months of planning, the Uganda team traveling to the Mbarara Outreach began the day by congregating around the Outpatient Department (OPD) a little before 6 o’clock. Since only half the team had arrived at that early hour, speculations about the cause of the delay were rampant. About thirty minutes later, two CURE U members arrived with the news that half their team had food poisoning! Slowly, all ten members arrived and those who were sick were examined by doctors and admitted for treatment.

Four CURE U members, including the team leader, ended up staying to recover along with a member from the Spiritual Department. The rest of the outreach team would travel to Mbarara, a 300-mile long journey from CURE Uganda that lasts between 10 and 14 hours depending on traffic, so they could meet up with CURE’s Pastor Simon Peter for an outreach at the Mbarara Lift Up Jesus Church. The purpose of the outreach was to share the love of Christ and to minister to families who were saved at CURE. This particular team consisted of six CURE U students, three spiritual center members, a driver, cook, nurse, social worker, and three pastors. 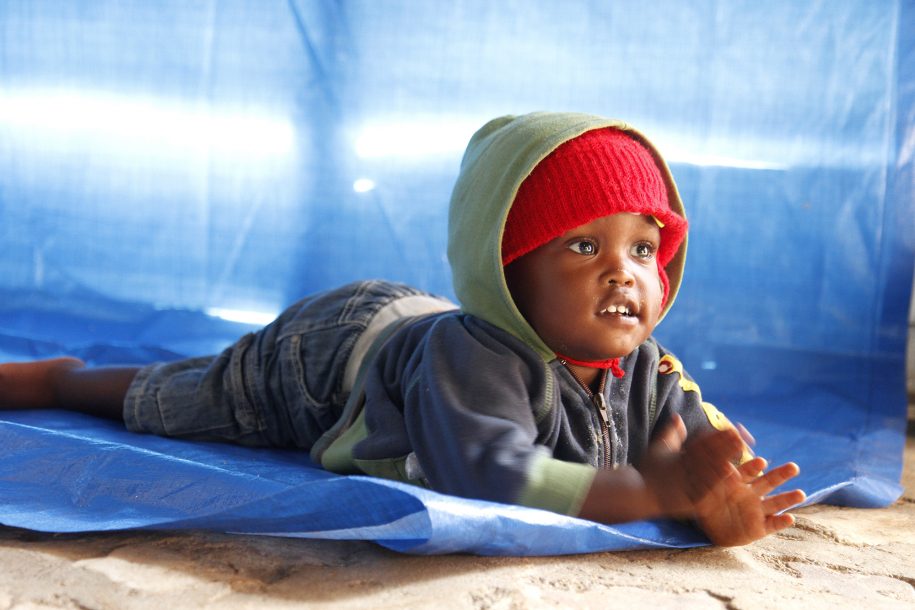 Avdon lays on the floor and claps.

The following morning arrived with a heavy fog and smoke covering the Mbarara Lift Up Jesus Church. The property was surrounded on two sides by rolling pastures spotted with large termite mounds slowly descending to a river. The day’s events began with morning tea. The families who spent the night at the church moved their mattresses and began to sweep it clean. As the dust settled, songs of praise echoed out of the building. One mom grabbed an empty jerry can and began to bang on it with two sticks. Several hours were spent singing, clapping, and dancing.  The youngest kids slept through the music; others clapped while some just played with toys. 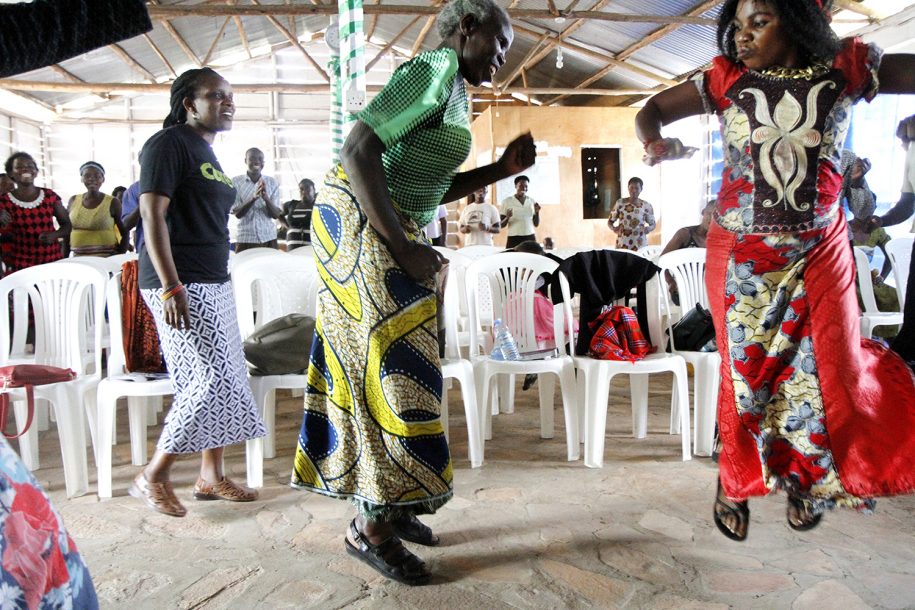 Jane, in green, and Pastor Enid dance during a time of worship.

For 16 year old Brian, his favorite part of the outreach was the worship music. He sat in the back and, on this visit, was accompanied by his new friend Bruce, a 13 year old. Together, they clapped and sang. They made quick friends with the CURE U students who danced and clapped with them during the upbeat and interactive songs, which sometimes resulted in more laughter than singing. 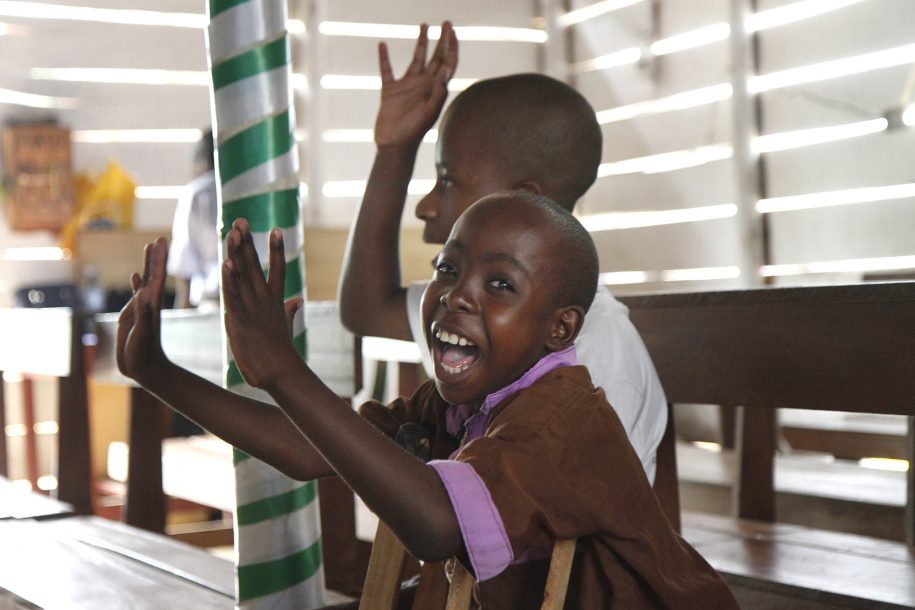 Bruce and Brian clap and cheer as they praise God.

The outreach then shifted from music to a time of prayer. Pastor Enid, who often leads worship and does most of the translation, paced along the edge of the stage at the front. She began speaking in a powerful voice with her arms lifted to the sides and her hands facing up. She was accompanied by Annet and Seera from CURE as they walked with her. The room was full of people in different postures praying for many things. 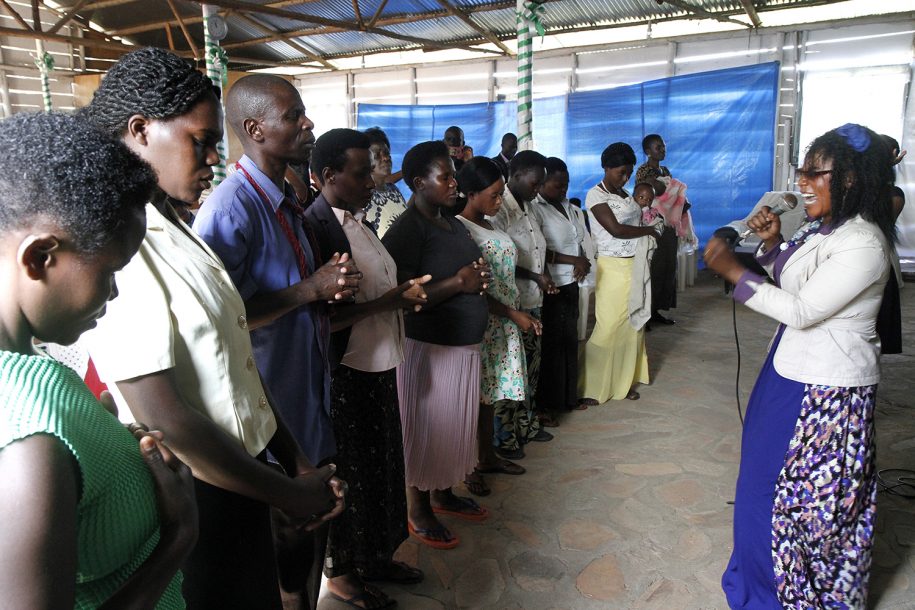 Pastor Enid prays for nine people who accepted Christ as their savior during the outreach.

In the middle of the day, CURE U students helped teach yarn-based crafts, and, by the end of the conference, families had new necklaces, headbands, and bracelets that they showed off proudly. Also, Emleigh, of the CURE U team, made bubbles for a smiling Bonita. Soon, Emleigh’s crowd of one grew to five with kids sitting all around her blowing and catching bubbles. The CURE U team also brought Disney and Despicable Me coloring books, which the kids loved. The crayons were a big hit with dozens of colors to draw with; however, some kids just liked collecting them while others enjoyed their taste. 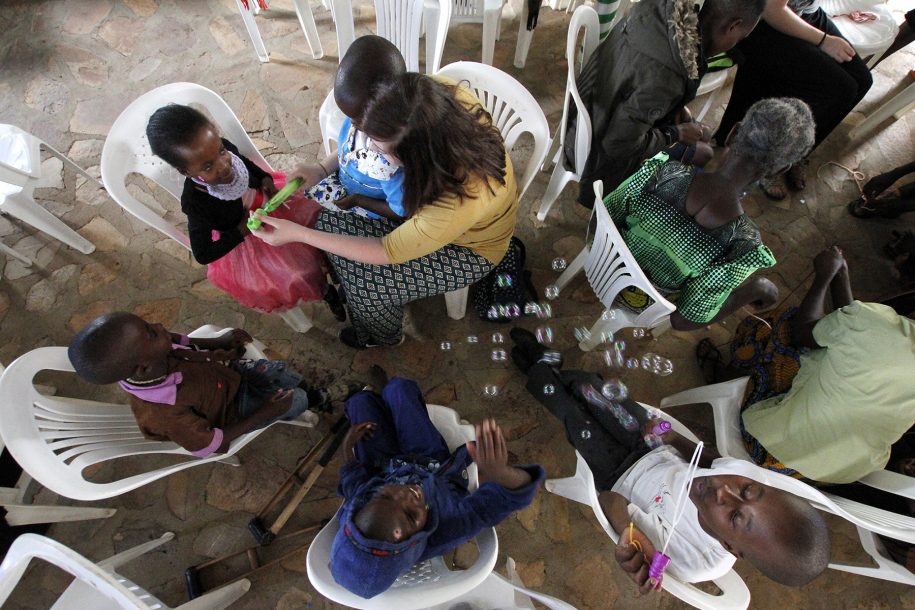 Clockwise: Emleigh holds Ann. Brian blows bubbles while Oscar attempts to pop them. Bruce watches Bonita as she gets help with her bubble wand. 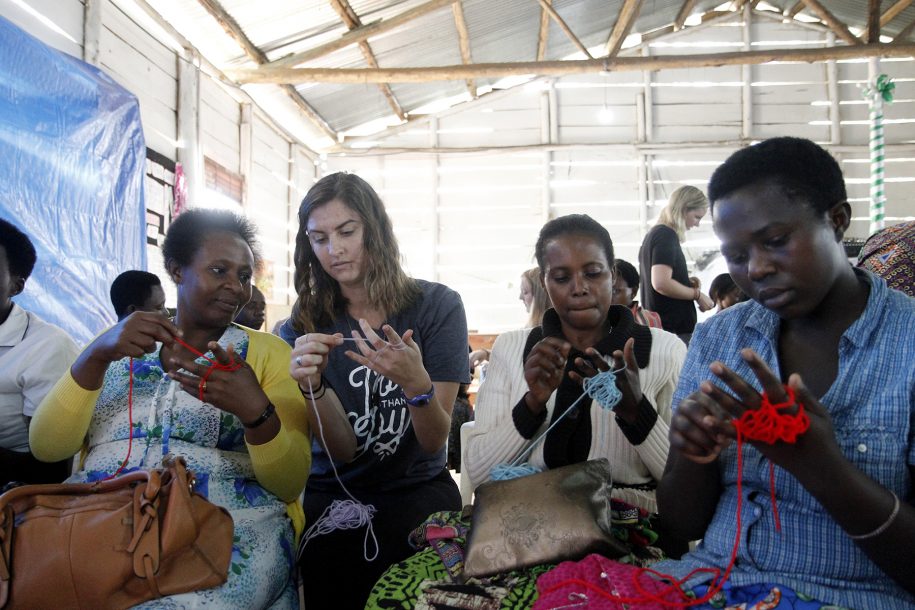 Jordan, second from the left, teaches mothers how to finger weave.

In the mid-afternoon, several teams went and did door-to-door evangelism. One team, led by Pastor Jackson, arrived at the home of Robert, which is just a stone’s throw away from the church. Robert listened to Bible passages and bowed his head during prayer. Afterwards, he decided he wanted to follow Christ and was prayed for by the team. Several more also came to Christ during the door-to-door effort. 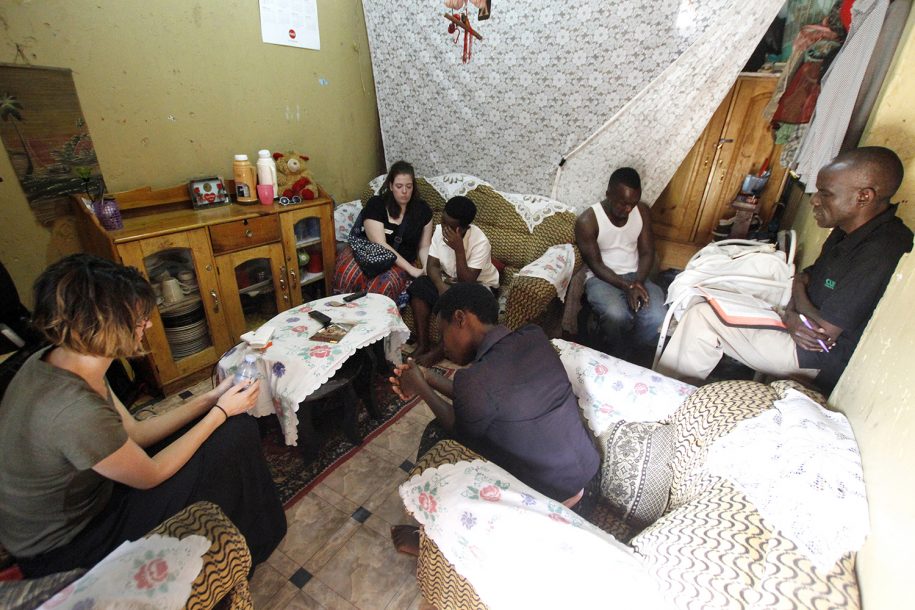 An evangelist team going door to door sits in Robert’s living room as he accepts Christ.

Nine others had also accepted Christ earlier in the day during the outreach event at the church. They were prayed for by the pastors and the congregation there. One of the nine was Jane whose son Darrius had hydrocephalus.

“What they taught me in this conference has made me very happy. That is why I gave my life to Christ. I came to learn and to pray. It has gone well. I saw God move. I have learned many things from this conference,” said Jane. 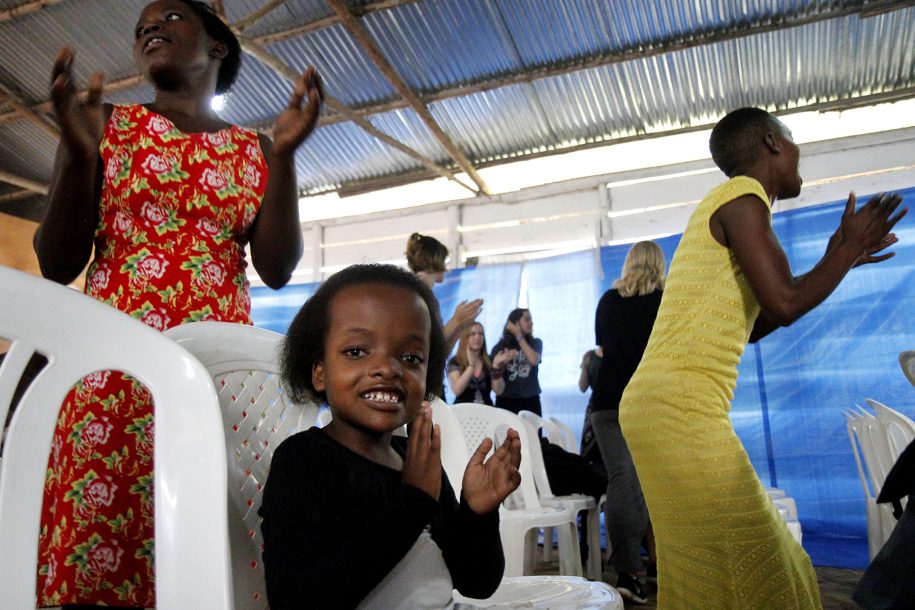 Bonita claps during a time of worship.

Another woman, Glorious, came to the outreach with her daughter Pretty out of desperation. Pretty had a shunt placed at another hospital, but it was failing and her head was growing once again. When her husband found out their child would need another operation, he told Glorious, “You go with your child; let the child die.”

Glorious explained, “The baby was crying too much. I was holding her in my hands. As a mother, I am seeing my baby in pain and I can do nothing.”

A couple weeks passed. Glorious and Pretty were back home and she decided to visit a church.

“I had gone to a pastor to pray for Pretty. He prophesied that people will touch the child; not by their hand, but by God.” 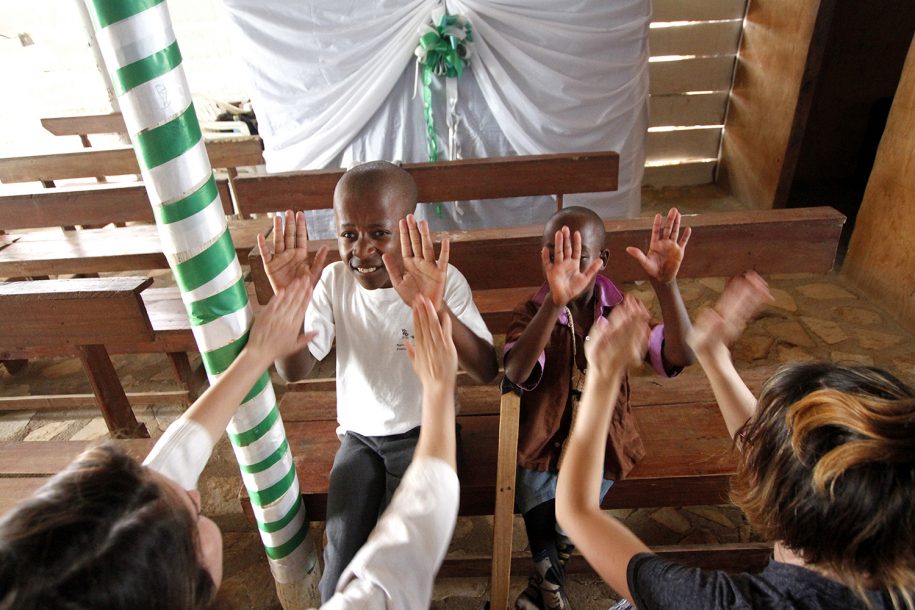 A few days later while listening to the radio, she heard about a teaching for children with hydrocephalus and spina bifida and decided to go. It was CURE’s spiritual outreach in Mbarara.

“When I came to the teaching, I felt convicted. I went to the pastor and told him I wanted to get saved,” said Glorious.

Pretty and Glorious were taken to CURE with the team where Pretty had a new operation that removed the shunt and allowed the excess water to move through the body. 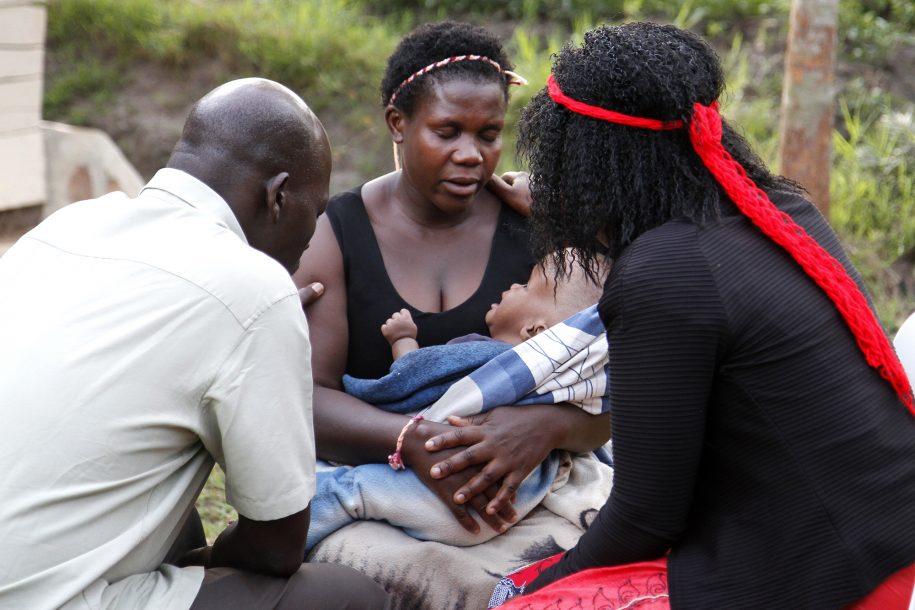 Pastor Simon Peter and Enid pray for Glorious as she accepts Christ. Glorious holds Pretty in her arms.

During the three-day Mbarara Outreach program, ten people gave their life to Christ and another six recommitted their lives, not including those who were saved during the door-to-door evangelism.

“I saw this perfect kind of love that was expressed to the mothers and children. One mother told me, it was easier for me to understand the love of Christ by the love she received,” said Pastor Fred. 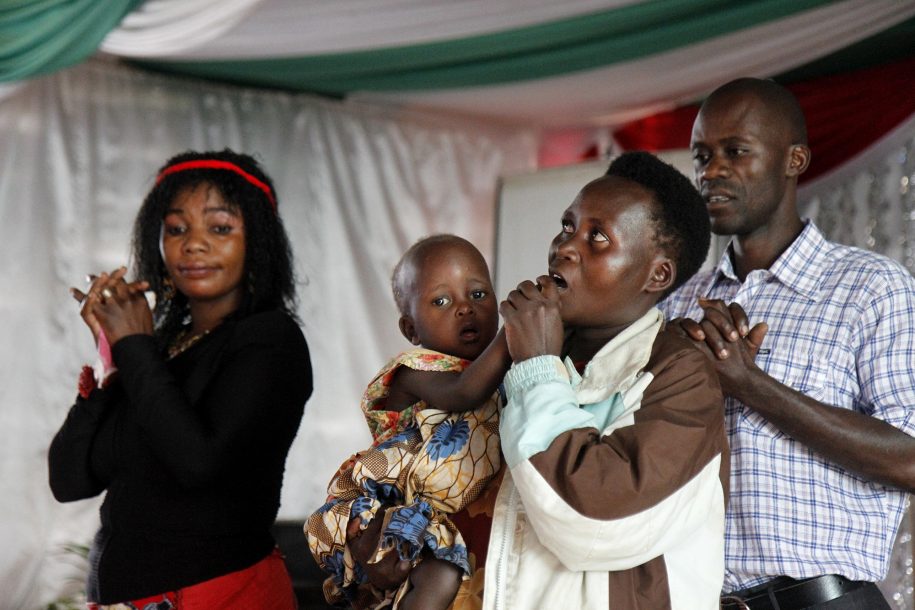 Asanasi holds her son Emmanuel as she shares her testimony.