Greetings from the Meads!

The past week was especially hectic. We had many children scheduled for surgery. Many had complex orthopedic problems. As surgeons, we were challenged to create plans and carry out reconstructions. We had cases of very advanced clubfoot with kids falling into syndromic disease patterns. (Syndrome is one of those medical words that really means, “I don’t know why, but here is another one.”) In another instance, a young boy had broken his leg and it failed to heal even after several years. No, he did not look like a classic, pseudoarthrosis patient; why? Another teen had a fracture dislocation of his elbow, which was never reduced and fixed. A limping 5 year old had a developmental dislocation of her left hip. And on it went.

I thought I would share a quick glimpse of something rarely seen, and then, introduce a young girl with a severe extremity problem.

The first young lady had a problem entitled, “constriction band syndrome.” She has tight bands on her extremities and has lost parts of fingers and toes. She came in for her foot. We noted thick bands pulling the great toe and forefoot up and in. A second band crossed the dorsum. Dr. Jun and Dr. Shelley combined to get the toe down and the foot straight. I was very impressed.

While they were tackling this young one’s problem, I was up to my eyeballs in my own challenges. Dr. Nesti, a young Filipino orthopedic surgeon joining CURE, assisted in my efforts. Princess had been burned as a very young child. Princess is only 4 years old now. At the time, she had little treatment, which left scars on her back, thighs, knees, legs, and feet. The scars gradually healed and contracted, pulling the knees into flexion and the feet out of alignment. The left foot was actually on the anterior leg. Both knees were stiff. I imagined the pain this child lived through and the pain she would now undergo as we tried to gain function. I was deeply touched. 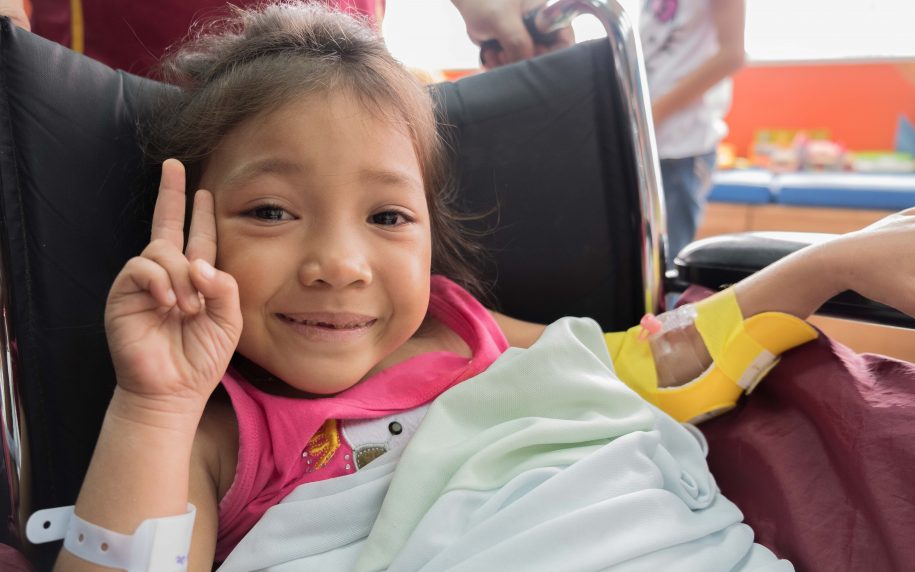 So, what to do?  First, I had to concede that I would not be able to resect all the thick scar sheets. Second, she would probably need future surgery to rebalance the remaining tendons. The plan was to try to gain knee extension and plantar grade feet for walking. As always, I must thank Dr. Louis Carter for teaching and equipping me with the skills to tackle such as case. Without his patient instruction and coming to Kenya over many years, I would never attempt this surgery. Thank you, Louis!

I started with the “easier” right side to get the lay of the land. My plan was to release the knee, and then develop a flap of skin-fat-fascial tissue to turn and cover the vessels on the back of the knee. Opening the knee left a large gap for sure. The hamstring muscles were contracted and required fascial lengthening. The muscles and nerves were freed from scar. The knee gradually came out to nearly straight. I elected to not fully correct the position at the end for fear of damage to the nerves and vessels by stretch injury. We can gradually stretch them straighter over time.

So, a large gap and a quarter-inch-thick scar band going toward the hip. The thick band was resected as much as possible and the thigh skin mobilized. The scar was like a mountain peak thinning and spreading to the sides. Some of the thinner sides had to be left. This would close, hoorah! Will it live? We shall see. I marked out my fasciocutaneous flap and checked several times that when rotated, it would reach all the way across the back of the knee. The flap was gently elevated and then transposed across. I tacked it into place.

Now, I still had the foot pulled up and out. I released the joint, lengthened some tendons, and pulled. Scar was removed and the foot came back to where it belonged. Here again, scar bands were removed and flaps moved around. There would still be significant gaps that required skin grafting. I asked Dr. Nesti to start closing some of the holes, and then crossed the table for the other side.

The plan was similar to the right side, but the foot was more severely involved. So, after taking a deep breath and saying another prayer for guidance and grace, we started. Released the knee, lengthened the tendons, resected the scar from the thigh, turned a flap to cover, released the foot, pinned the foot in the correct position, resected a scar on the leg, and closed what I could. We had used tourniquet control for bleeding. Removing the tourniquet, I released a couple of our flaps from their transposed position and moved them to other less aggressive locations. A dusky, whitish flap will not live. In the new position, they appeared much happier.

So now, we had more area to graft. Tebow CURE was blessed with a gift of a new Padgett dermatome this year. Thank you! Two long sheets of split thickness skin were harvested from the medial and lateral left thigh. We meshed the skin to expand coverage. The skin was then spread out over the open areas. All scar was already removed and healthy tissue remained. This was a tedious task, but it looks nice when done.

Despite two nice grafts, we still had defects to cover. Her small legs made me go to the other thigh. Mesh again and apply. We were nearly done. A somewhat complicated dressing of non-stick gauze, moist pads, gauze, and finally, long leg casts finished the ordeal. The toes were pink. Healing was beginning.

The first day, the pain necessitated another nerve block. Today was post op day 2 and Princess was up in a chair and wanting to go to the playroom. Amazing! Now, we continue to pray for healing of all the tissues and incorporation of the grafts. The road is long, but the goal of walking and running is worth the effort.

Princess is a special girl with a sweet smile. Surgeries like hers are, thankfully, rare. The costs in time, supplies, equipment, pain, and rehabilitation are high. With partners and a gracious God, we will succeed traveling on the road to healing in His Grip.