We were lost in translation, but we felt chills as the two women walked into the room. The funny thing with body language is that it surpasses linguistic boundaries and speaks to an individual without the tongue uttering a single sound.

We were in Addis Ababa, Ethiopia, at Black Lion, a huge government hospital. The hospital has three clubfoot clinics every week, which is one of the biggest in our program! The clinic takes place in a huge room full of medical personnel observing, scoring, and reviewing all sorts orthopedic conditions amidst crying babies and toddlers jumping up and down.

Overwhelmed by all the action, we retreated to the “counselor’s office,” which in reality was a storage space where we were surrounded by braces and other clubfoot treatment materials. While catching a break, we were interrupted by a nurse who brought two women with her who looked distraught and impatient. 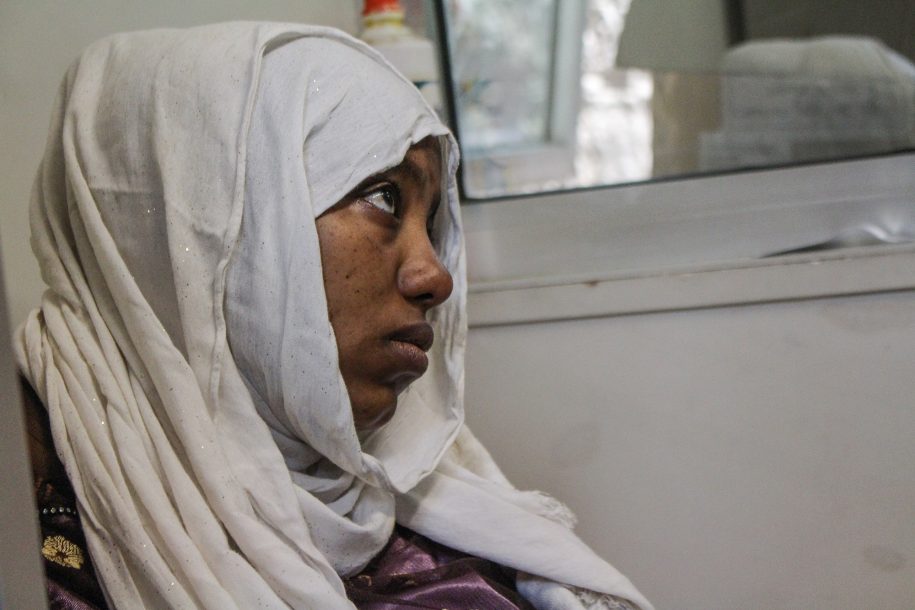 The moment that she walked into the room, we could sense her sadness!

The nurse spoke to our colleague in Amharic, which is the official language of Ethiopia. It’s spoken by over 9 million people across Ethiopia. Of course, we did not understand a single word. We paid close attention and nodded along to every pause and sound, trying so hard to fit in and look helpful!

With a puzzled look, we stared at our counselor and translator with raised eyebrows, begging to be filled in.

“They have brought us a new patient. Five days old. The baby has not even been named yet. We have to give them First Education.” 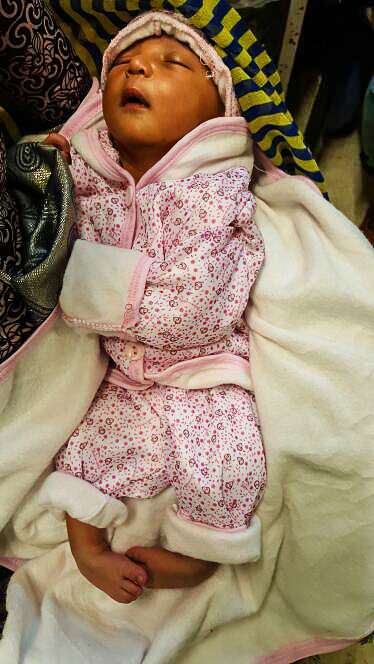 First Education is what the counselors give to guardians when they first come to any clubfoot clinic. It is essential that parents and guardians understand the treatment and ask many questions. It also helps the counselors understand just how much the parents know about clubfoot. The counselor is also able to read the guardians and see what approach to take. Truth is, most of the people who walk into our counselor’s office are usually disturbed by the thought that their children will grow up with a disability. We usually have very tiny babies and mothers are often still tired from the labors of childbirth.

This current situation was not any different. The mother in front of us was so tired that she could not even carry her own baby. She relied on her friend to do it for her. With simple introductions done, our counselor, Beza, went into an amazing explanation of clubfoot. She was so animated and into the discussion that we found ourselves nodding our heads once again. We definitely could not understand a single word she said, but her body language was definitely speaking to us. She was using her hands, nodding her head, bending her knees to show clubfoot posture and doing a thorough job of mimicking how children with untreated clubfoot walk. She was also pointing at a poster on the wall, which was in Amharic, of course. We could not read a single word, but we understood the animation and were not lost! 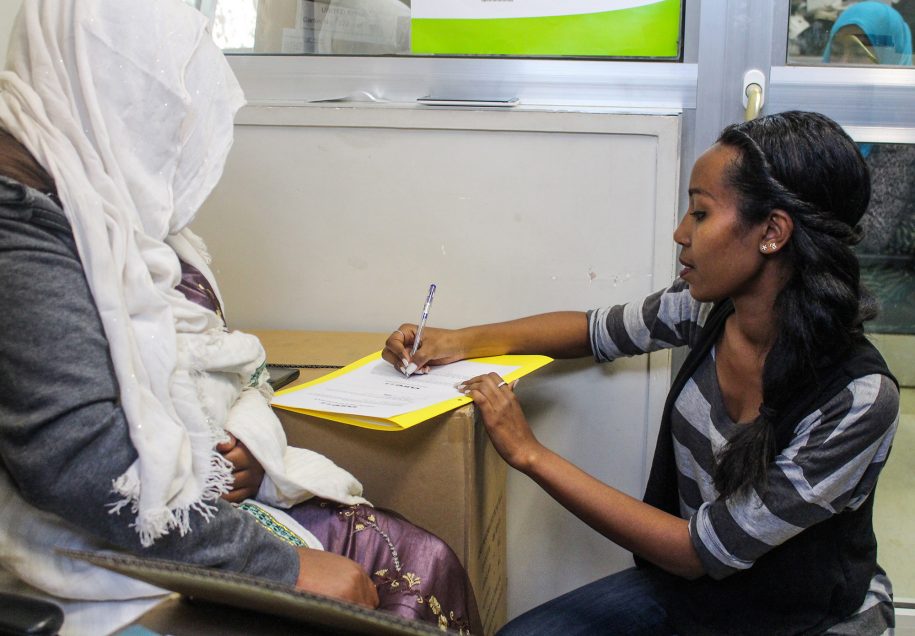 Beza, our counselor, gives brief introductions and gets personal details of the mother.

Counselor Beza walked towards the baby and lifted the many layers of clothing that were covering her. We noticed the mother flinch. She seemed embarrassed that we were interested in looking at her baby’s feet. Under the clothing was a very beautiful and tiny little girl, oblivious to the adults who were having a very animated conversation around her. When Beza reached for her legs, the sleeping beauty moved her tiny pink feet and put them together, as if she knew they were the topic of discussion.

“I have just talked them through the treatment, and the mother is skeptical—that the treatment may not work. She gave birth at a hospital right here in Addis, and the doctor referred her to Black Lion. She has made the right step by being here, but you can imagine how tired she is!”

We were curious to see how Beza would handle this situation. Naturally bubbly, she always has a happy spring to her step. She embodies our organization’s value of being “childlike” to the maximum. She is always running and jumping with the kids in different clinics. At 24, Beza was well-versed with clubfoot and how the community could be engaged.

Silently squeezed between two boxes of braces, we noticed the mother was very uncomfortable. Every time Beza said something, she sighed or winced. She had a sad expression on her face. From our vantage point, it looked as though the white scarf she had wrapped around her head was engulfing her face. It made her look smaller. She sunk into her seat and stared at Beza with so much sadness that it gave us goose bumps and left us feeling uneasy. 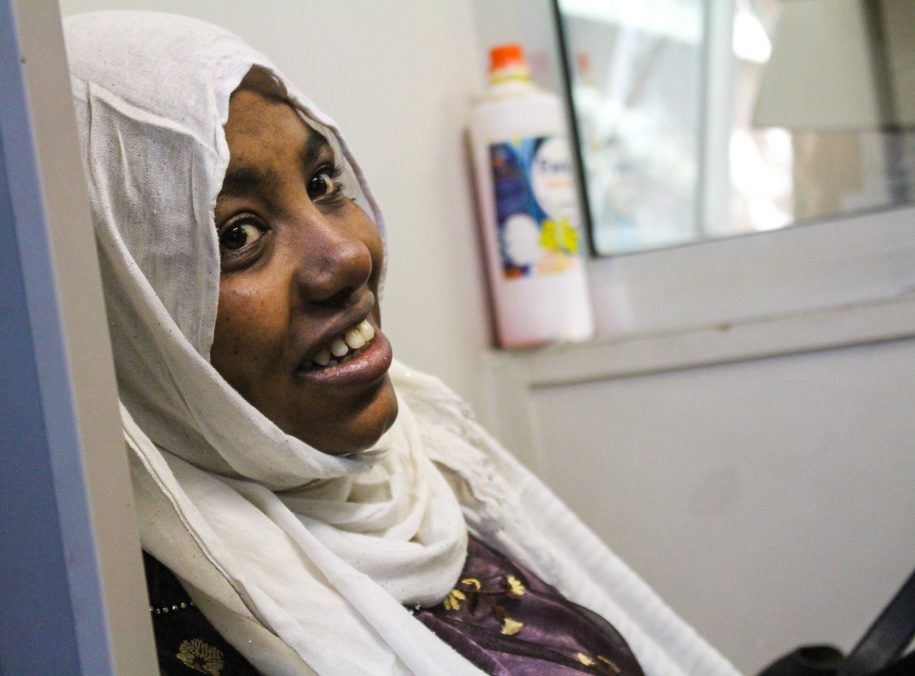 “Beza, is it possible for you to get a mother that has a baby with bilateral clubfoot to talk to Samira?”

“That is the next step right now. We have a room full of mothers and babies, and it is the best way to give this woman hope. I will be right back,” she said, dashing through the door.

We were left with two women and a baby, which is a setting for a rather hilarious TV sitcom from the 90s.

So, there we were, strangers who spoke no common language with a baby that needed help. Samira looked our way with a hopeful glance, and we reciprocated with one of those blank smiles, our body language conveying kind gestures. The awkwardness that engulfed the room could be cut with a knife as each second passed. We wondered just how hard it was for Beza to find a kid and bring her back in.

Five minutes felt like forever and Beza finally returned followed by a mother cradling a baby. 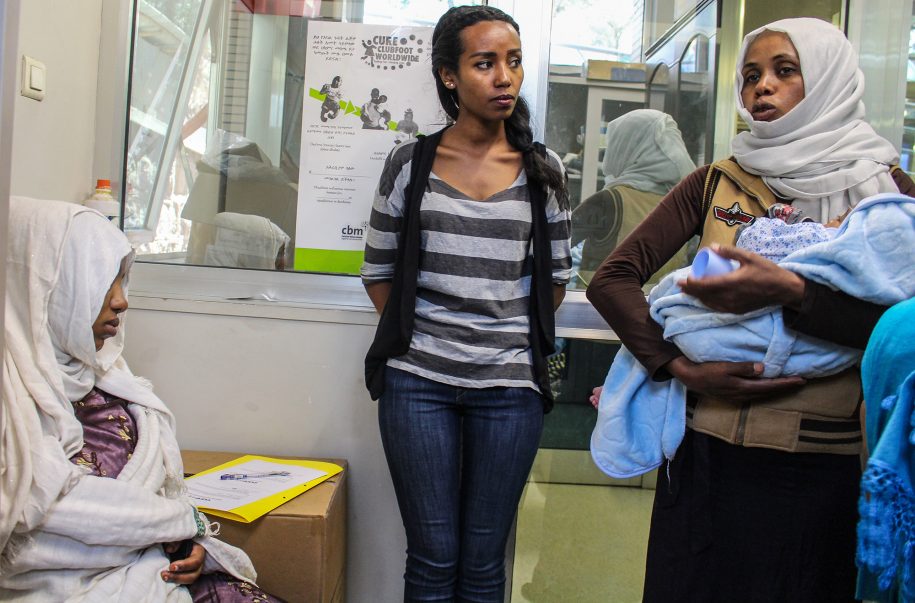 A clubfoot mama shares her experience.

Beza really knows her patients, and the woman she chose was a feisty lady who spoke with so much vigor and enthusiasm that we even felt motivated! We fell just short of breaking into song like a Disney cartoon. Of course, all this was taken from body language, and we could see the expression on Samira’s face change. She was now looking up. It felt like we were observing a transformation that definitely needed no words!

“This lady is telling Samira that the inevitable happened, and that the child was born with a disability. It is now her fight to ensure she provides care and follows treatment. She says that treatment is easy, but needs a lot of discipline and commitment. Her baby’s feet were like this one here, and she is happy with the progress. She is just encouraging her and giving her much needed advice,” Beza translated.

We saw Samira nodding her head in agreement and lifting it a little higher. She had never heard about clubfoot before, but seeing that lady’s baby gave her a flicker of hope that she never had when she first entered the room. The lady gave one final smile and exited the tiny room. 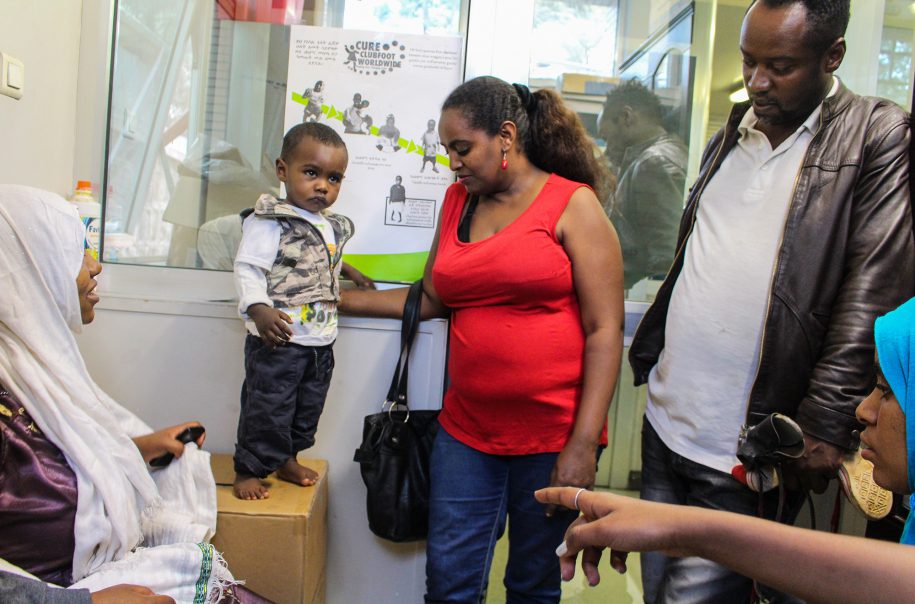 “Is it okay if you can go and find a toddler who is now walking and in the brace stage?”

Enthusiastically, Beza nodded her head and off she went with that bounce, disappearing around a corner and leaving us in that sitcom mode once again. This time, the awkwardness was less severe as Samira and her friend spent the time talking in Amharic, nodding, and, occasionally, smiling at each other. It was not yet a full smile, but we were getting there.

After what felt like an eternity, a man walked into the room with a pair of braces in his hands. He greeted Samira, her friend, and us with a quick nod. They chatted away in Amharic while Samira paid close attention to the braces in his hands. A minute later, a woman who turned out to be his wife, walked in with a two year old boy and they engaged Samira in conversation. We had to rely on body language to see that the discussion had positive impact. The boy’s feet were straight, in the right position, and his mother was beaming. 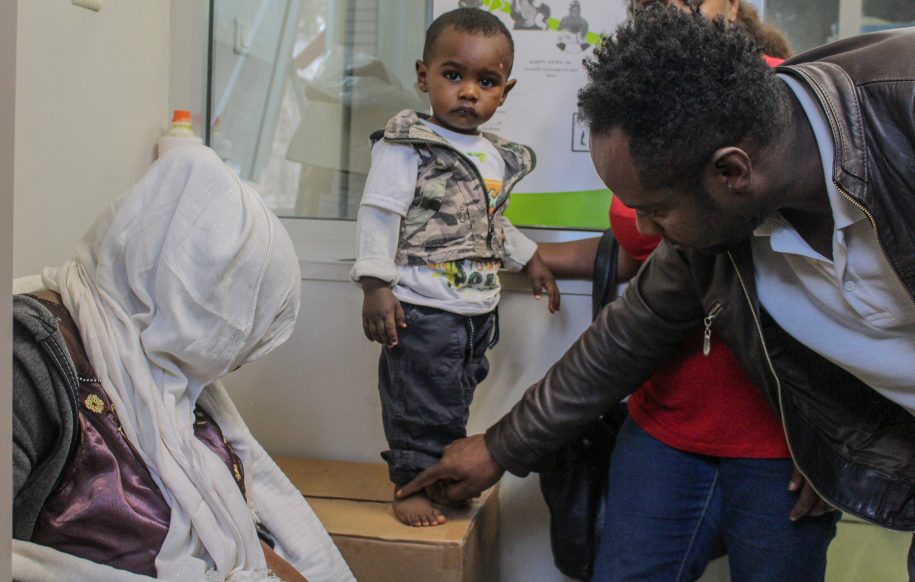 Samira’s eyes widened in disbelief, but we could see a huge smile forming on her face. The boy’s mother firmly put his feet on the ground and he took two steps before bursting into tears and asking his mom to carry him. Kids are so unpredictable, but those two tiny footsteps planted a hope in Samira that none of us could provide. She smiled and beamed and looked at those little feet with happiness. Seeing Samira smile made everyone feel so relaxed. That little boy’s feet worked wonders!

We showed Samira a video of a kid running up and down in red sneakers just an hour before, and Beza told her that the kid also had bilateral clubfoot. In the video, Beza was jumping with the kid, of course. That video sealed the deal for our reluctant mother and she smiled at us, revealing pearly white teeth and a hint of happiness and joy. She had regained her smile after crying her eyeballs out for five days! 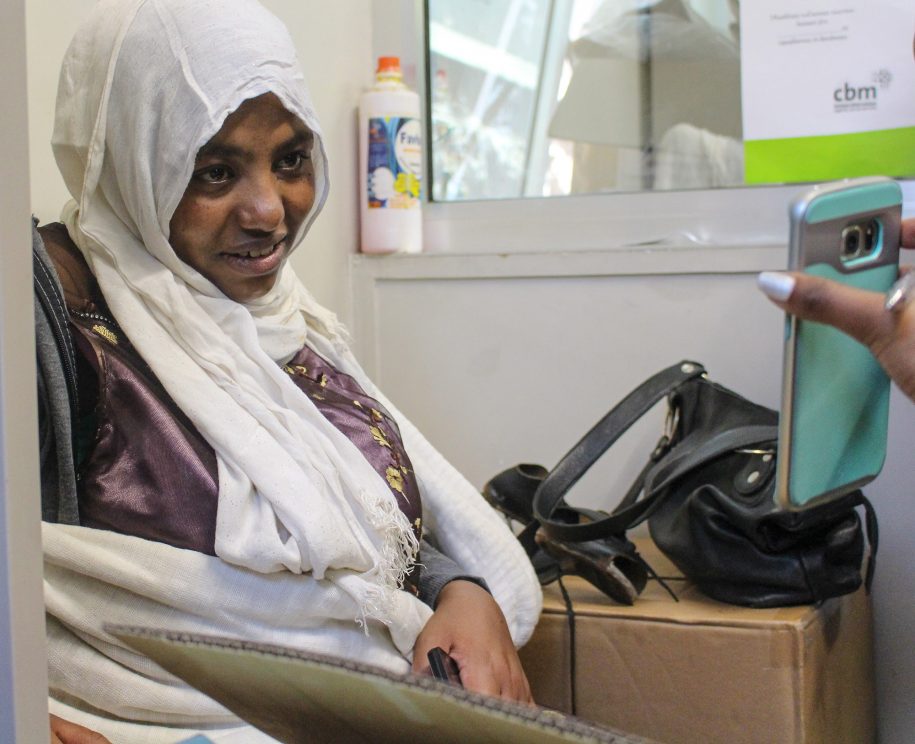 We show some video footage to provide more proof on the positive results of Ponseti treatment.

Samira was given an appointment date of two weeks. She said she would definitely be back to begin treatment. They couldn’t start treatment that same day because there was a holiday that would disrupt the clinic and the doctor did not want her to miss an appointment.

It was so awesome watching these women restore our faith in the work that we do. Sometimes, we all need a little room to remind us why we work so hard! In the face of human kindness, one does not need words to feel the pain that someone else is going through. One simply has to have the desire to go beyond verbal to ensure people leave the room with no worries. Now, excuse us while we go polish up on our Amharic and watch a timeless cartoon because age is definitely relative when you are childlike!