Alex is a Scrub Technician and Assistant OR in charge at CURE Uganda, but he didn’t always work at a hospital.

“I really wanted to work in a hospital. You know, when you are a kid, that thing of admiring doctors. When you’re sick, they treat you. I could see them wearing their white gowns and stethoscopes.”

Nor does he have a science or medical background. Alex had pursued a degree focusing on history, economics, divinity, and stroke painting. So, his dreams of working in the medical field seemed slim. After graduating, he worked in general construction. 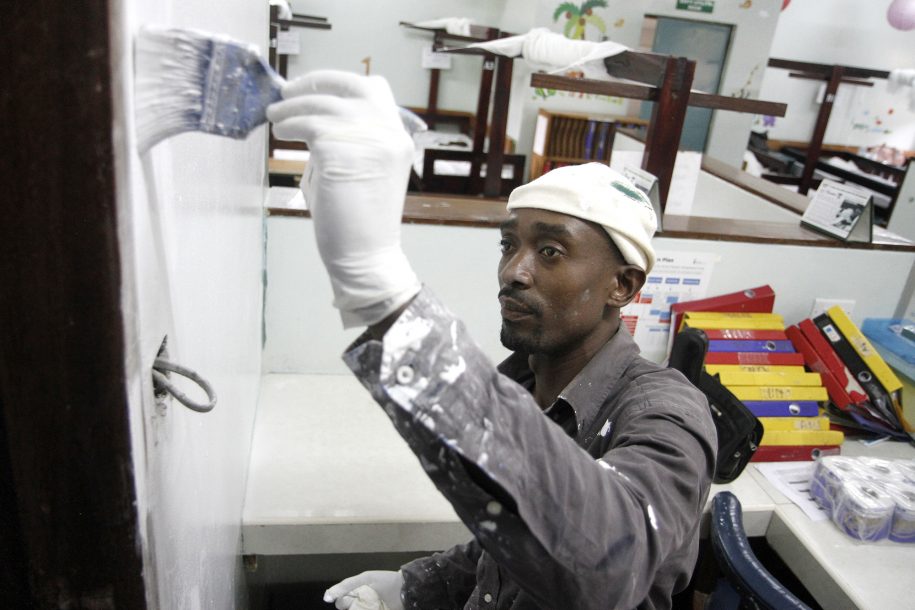 Alex paints the nursing station after the remodel of the women’s changing room was complete.

Back then, Alex was living with his uncle. Their neighbors at the time, Martin and Justine, would change Alex’s life in helping him achieve his dream.

“Since the husband of Justine [who is a chef at CURE] was my friend and we were neighbors, he [Martin] used to see me at home sometimes not doing anything. So, he asked me if I would like to paint. He was like, ‘Okay, you come to CURE tomorrow,’ stuff like that. I came and he introduced me to Takan the maintenance guy and I started from there.” 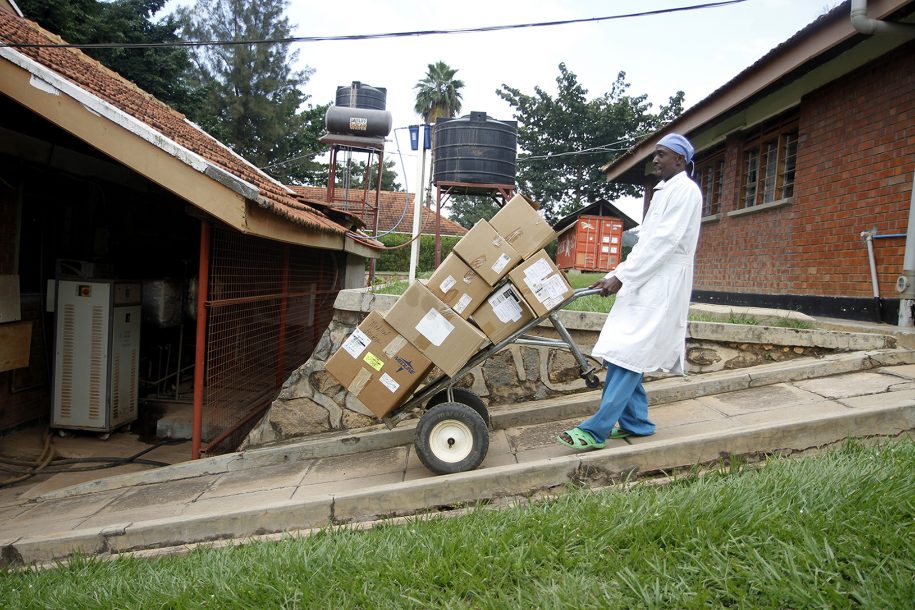 Alex moves supplies from the storage containers into the OR.

Alex was offered various contract jobs that he covered for CURE during shortages that would range from a couple of days to a month. But it wouldn’t be until 2010 when an opportunity would open up that would allow Alex to change his career path.

“My time at general service was good, but I still really wanted to do something medical—even if it would be in autoclave, maybe even cleaning in theatre. I just wanted to put on the uniform and be there. That is when OR advertised they wanted a scrub technician, someone who can memorize instruments… I passed the interview and I got the job.” 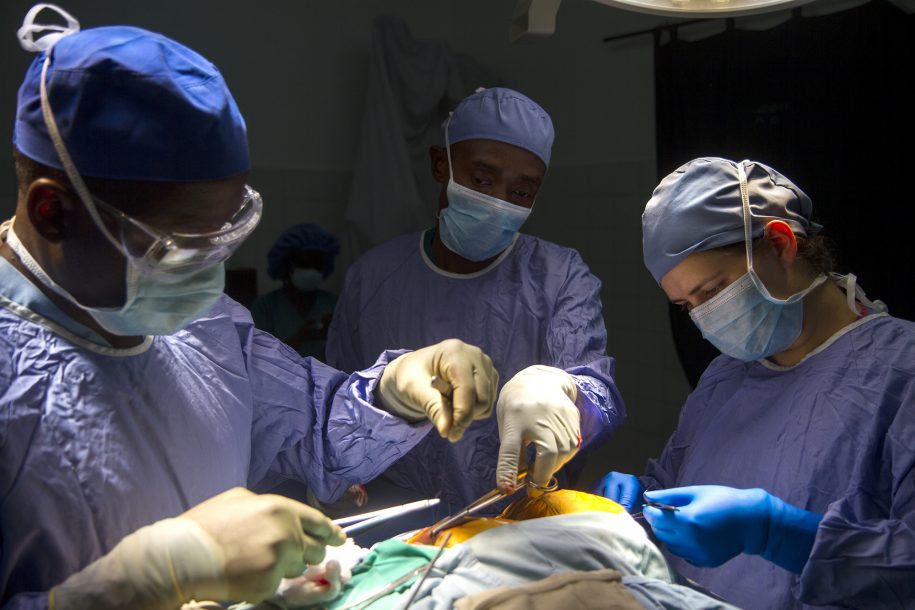 Dr. Justin, left, stitches up the abdomen after placing a shunt. As Alex cuts the stitches, Dr.
Kerry stitches the wound on the head.

“If I wasn’t neighbors… maybe I wouldn’t even be here. Maybe I would be a mechanic or something. I was staying with an uncle who had a truck. He was in the army; the brother to my mom and he had a truck that people would hire. Maybe I’d would be working for him.”

After successfully interviewing for the position of Scrub Technician, Alex began his dream. He started working in the autoclave room where he learned about the instruments and how to fold towels and gowns. Within a couple weeks, he shadowed the other Scrub Techs, and after two months, he had his first case: an ETV with Dr. Mugamba.

“I had a passion to work in a hospital setting. It was like a dream come true. If you ask why I really wanted it, it was something I had wanted for a long time. It was just within me.” 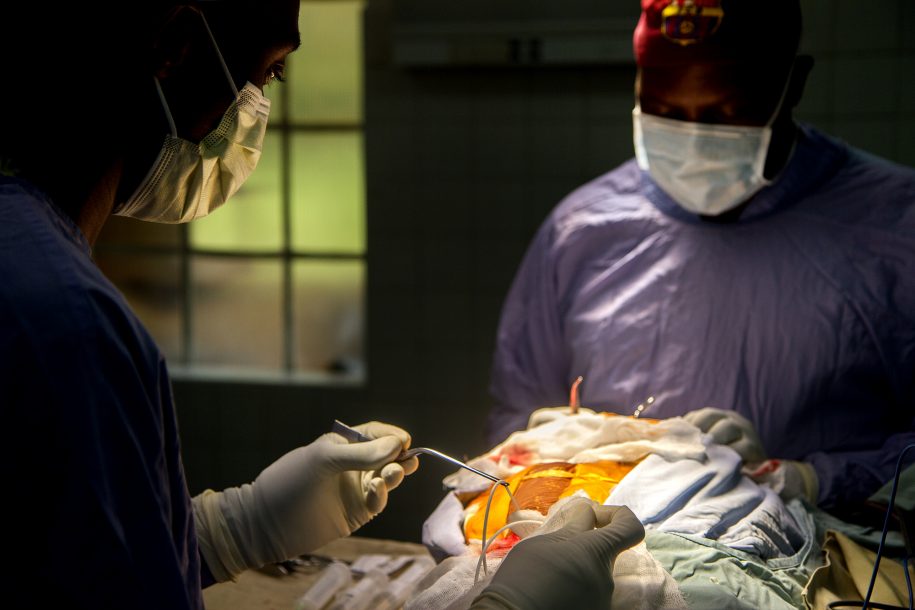 He describes his first surgery like the feeling you get before an exam. He was full of worry and anxiety. Alex had been watching the workflow of Dr. Mugamba: how he moved quickly and wanted things done correctly. Alex began to have worries that he would make an error.

During Alex’s first operation, as the speed of the surgery increased, he said, “I was panicking and shaking, lots of shaking.” 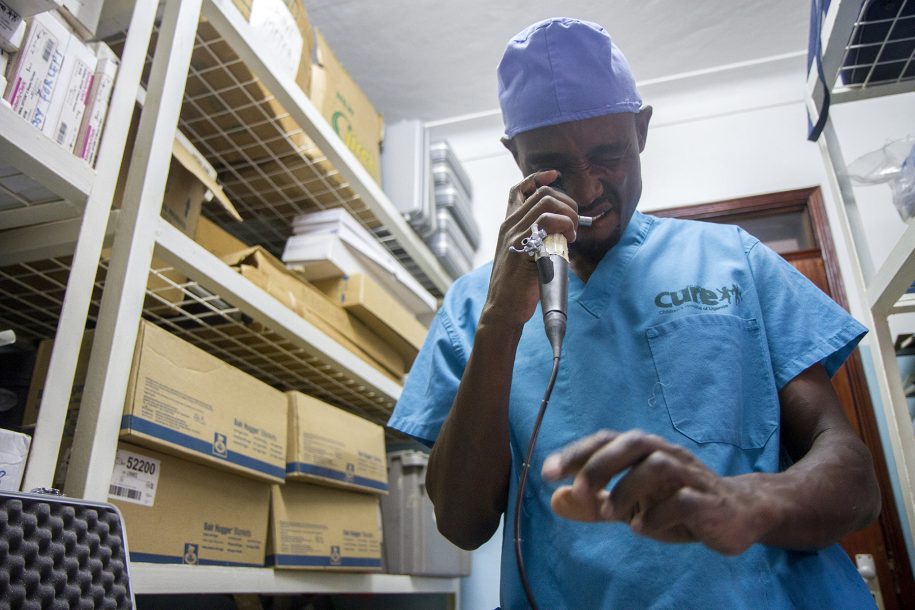 Alex examines a scope he found in a case in the storage room he manages.

After making it through his first operation, Alex would go on to do hundreds of surgeries with Dr. Mugamba from 2010 ’til 2015. Then, Dr. Mugamba transferred to CURE Zambia. The ETV procedure, which once made Alex shake, now bores him. Instead, he likes to “scrub” for more complex cases—the cases where it’s all hands on deck.

“All procedures are good, but I love scrubbing for tumors. I love MMS (myelomeningocele) and shunts. We do plastics and I like them because you get involved, [and] you feel like you’re part of the process. You start with the surgeon and you’re busy. You’re all busy and helping each other. You’re helping him. It’s a two way thing… ‘You hold here,’ he says, ‘Cut.’ You cut. Also, you hold for him and he also cuts.” 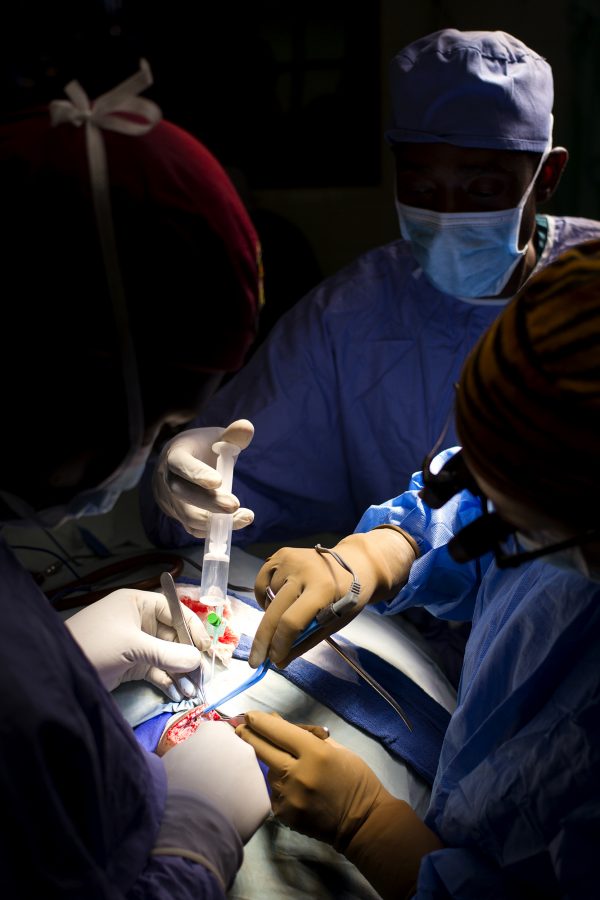 During the days of Dr. Mugamba, Alex would scrub an average of two cases a day, five days a week. He doesn’t know how many cases he has done, but he says, “Enough to fill a book.” However, there is one particular procedure that he will always remember.

“There was a case that was special. I don’t remember the name of the patient. It was an adult, a lady we did a tumor resection for. These usually take a long time for recovery. But this lady, we did surgery on her and after a few days, I think after two days, she was up! She was talking. She was with the family. She was walking around, and, for a long time, I had not seen that. Actually, I will never forget that. She recovered so fast I think after two days she was up seated in the compound with the family walking and eating. It was a miracle!” 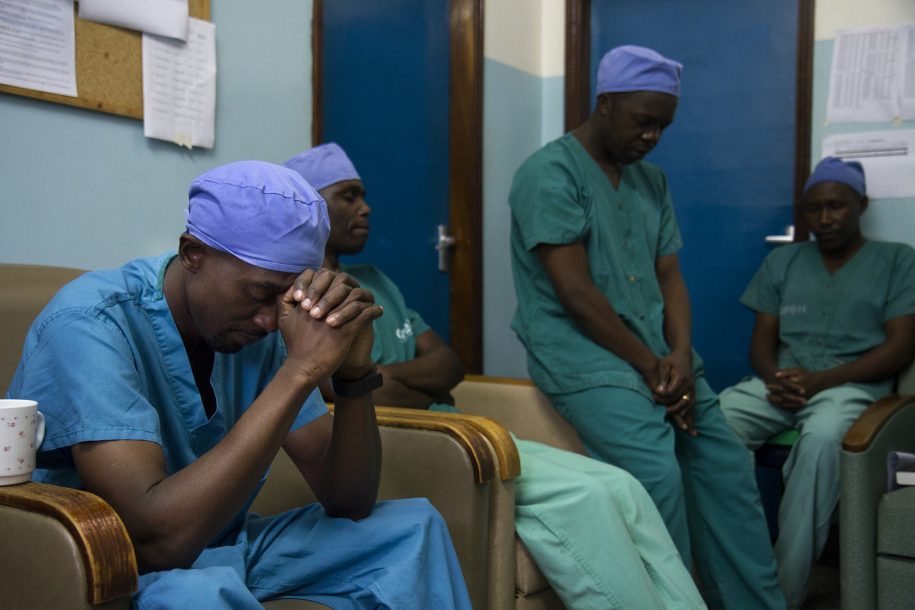 Every Friday morning, departments meet for a time of devotion. Alex bows his head during the
prayer.

In surgery, though, no outcome is guaranteed. Before every operation, a prayer is said asking God to watch over the patient and to guide the medical team’s hands.

“You can see that it’s the hand of God. There are moments you really see someone bleeding and things are changing, and you think we are going to lose this one… but you keep calm through all that, and, in a short time, the bleeding is controlled and the vitals normalize, even the surgeon sometimes asks, ‘Who prayed?’ Then, they are like, ‘Your prayer is working.’”

Working in the OR has also shown Alex how fragile life can be.

“You develop a sense of responsibility and you realize life is very important. You appreciate when you are healthy. You don’t take life for granted. Every day you have to thank God. When you see people come in here every day with tumors and spina bifida, you appreciate life.” 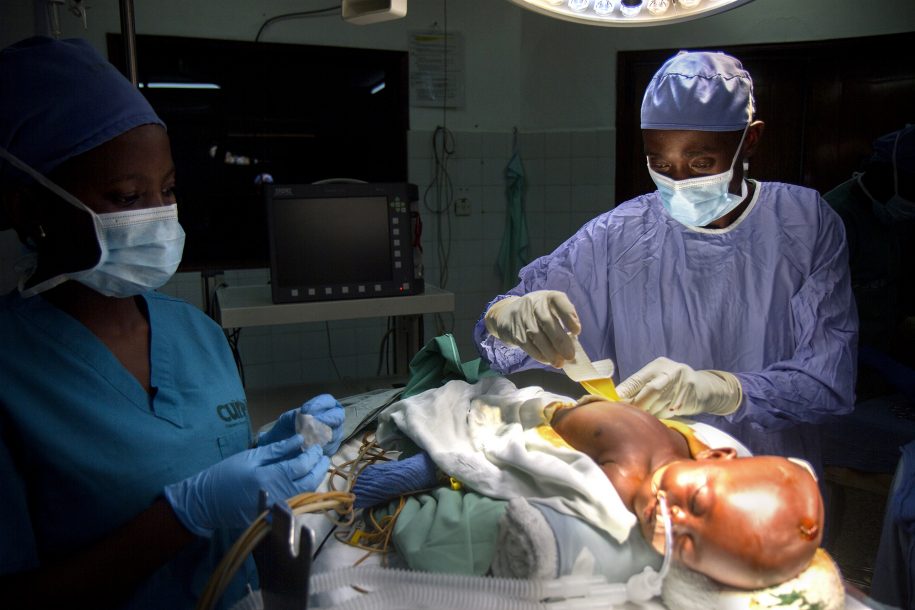 Alex dresses the abdomen after a shunt was placed.

Along with the pain of sickness, Alex gets to experience the joy of healing.

“That treatment, when you see a change in the babies. Those who come in with MMS [myelomeningocele] and are healed. Those who come with tumors and we remove them and they are okay. That gives you joy. I’m doing something. I am a part of something big. You wake up in the morning: let’s go save a life. I feel very fortunate to be part of CURE; to work in this organization… It gives you joy, makes you feel good working in such a place where you are able to change lives through surgery and prayer. It’s a special place to be.” 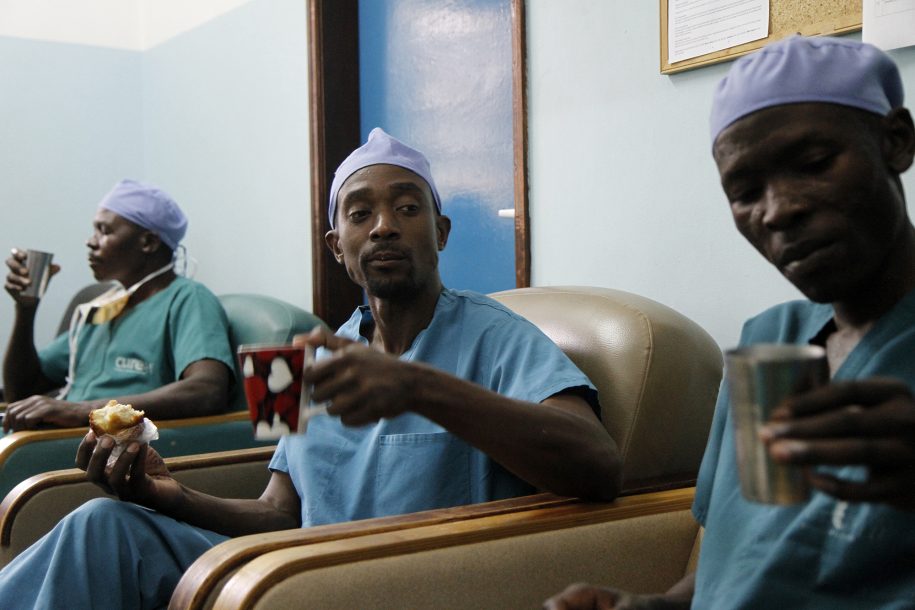 After the last case of the day, Alex relaxes with tea and a snack.

Co-Worker Profile In The Field