I was walking through the ward that morning heading towards the clinic when I noticed Godfrey sitting on a bench by himself. My first thought was that maybe he was sunbathing and I shouldn’t disturb him, so I lifted my camera to take a quick picture. He caught me just as I was about to do that and beckoned for me to join him, and I did. We exchanged the usual niceties and stayed silent for a bit.

I was curious to know why he, and not his wife, had accompanied his son to the hospital because it’s usually the mothers who stay with our kids while they are here, but I didn’t know how to ask, so I started my attempt with a simple, “So, what’s your story?” He smiled at me, clasped his fingers together and leaned forward as his eyelids almost shut as he started his discourse.

“I had asked for two months away from work, so I could tend to my fields. My employer is very nice; we are almost like family and he has no problem letting me go. We farm laborers don’t earn much, so he allows us to go home during the planting season so we can cultivate our fields and take care of our families. I have seven kids, four of which are currently enrolled in public schools. My wife grows bananas seasonally, but she is usually taking care of the house when I am away working on my boss’ farm.

“That day was not different from the others. My wife and I went to the fields early in the morning, but somewhere mid-morning, I was called back home from the fields to come and attend to an emergency. That was the minute that changed my life!

“As I rushed back to see what it was, my thoughts went wild and my heart was throbbing uncontrollably. I was trying not to lose control, but I didn’t know how to. I wasn’t ready! Well, no one is ever ready for bad news, but I think my situation required an extra measure of grace because when I arrived home I was met by so many hopeless faces and a pale one. My son Mazuba was lying on the ground with a few local children surrounding him and the neighborhood rallying behind them. He had lost so much blood and he looked pale! My eyes met his just before I glanced at his legs, and I could see so much pain on his face.

“When I realized what had happened, so many emotions came like a wave and engulfed me, all at the same time: horror, sadness, anger, and fear. I will admit that at that moment, I was too shocked to decide which emotion I was going to keep. It was overwhelming!” 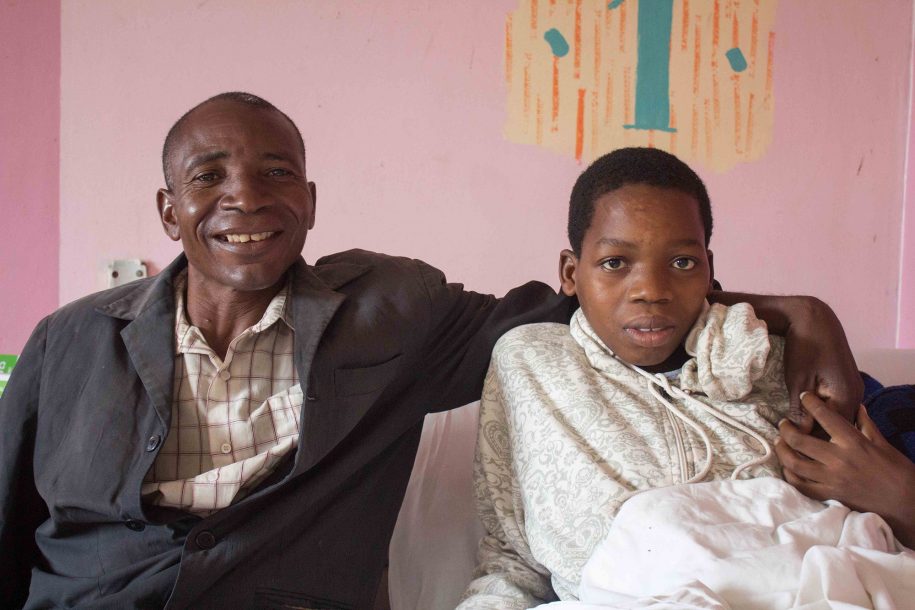 Godfrey, left, and his son Mazuba.

He paused and stared at the sky as if he was trying to recollect the exact turn of events. Then, he tilted his palm upwards and continued his story.

“Mazuba is my third child. He has an older brother and an older sister. The two are in secondary school and he is in fifth grade. At 14, he is an impressive young man. He loves to read and write and is generally considered a quiet boy to those that do not know him and a dear to those that do, especially his younger siblings. He plays with most of the kids in our community, and their favorite activity is fishing. It is like a sport to them.

“As is usual, he had gone fishing with his friends that day. Since he attends school in the afternoon, they were going to be done in good time to prepare themselves for class. Everything went according to plan, and by the time they were leaving, they had quite some fish to boast about when they got home.

“Mazuba, however, was the last one in the water, and as he was about to get out of the shallow water, his friends heard a loud sound, like an axe hitting a tree trunk, then a struggle in the water. By the time Mazuba realized what had happened and managed to let out a scream, it was more like a high-pitched shriek. A huge crocodile had fastened it’s teeth around his right leg and it was pulling him into deep waters. His friends stood there in shock, too scared, too intimidated by the large wild reptile with its menacing eyes. They began to scream and call for help. This went on for a few minutes as Mazuba courageously battled for his life with his failing strength against the crocodile. Lucky for them, an older boy from the community heard their cries for help and came to my son’s rescue. He fought away the crocodile, but wasn’t able to stop it from stealing away a chunk of muscle from Mazuba’s left thigh before it left.

“It took me a while before I could do anything when I saw him. Looking back now, I think I was more traumatized than he was. My wife was inconsolable. We managed to arrange some transport from my boss and went to a local hospital, which referred us to Beit CURE Hospital in Lusaka.

“It took three days from the time he was bitten by the crocodile for us to reach the hospital. In that time, I had lost most of my faith. He was immobile and his face had lost color. Everywhere I touched him seemed to cause him immense pain. He also hadn’t moved his bowels during that time and was complaining of tummy ache. For me, it was going to take some form of a miracle for him to get back to being the boy I knew because although he was in so much physical pain, his emotional pain was worse and his spirit was crushed. We were all very scared!

“You know, as I am telling you this today, all I can say is that God has been good to us! From the day we got here, the doctors worked on his leg every day to fight infection until they were able to stabilize the fractures and put on a skin graft. Today, I helped the physiotherapist to try and train him to use his legs again, and, although, he only lasted 30 seconds on the walker, I was filled with so much joy! I never thought I would see this day. We still have a long way ’til he is fully healed and rid of his pain. To be honest, whether or not he gets to use his right leg is entirely up to God, but I am happy I have my son back. I am not afraid anymore!” 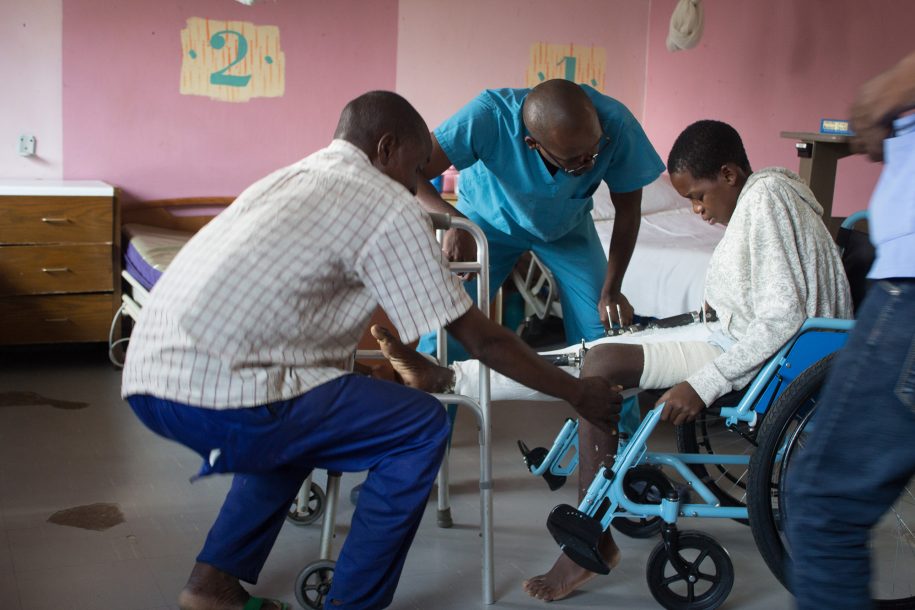 After listening attentively as Godfrey told this story, my heart was moved and I remembered my Sunday School lessons, how God tells us that He has not given us the spirit of fear, but of love and of sound mind (2 Timothy 1:7). Often times, it is hard to keep a sound mind when we are faced with a tragedy such as Mazuba’s, which is too ghastly to contemplate. It is often so easy to lose faith.

Mazuba is a constant reminder that even in the valley of the shadow of death, fear may be present, but it goes away when we realize that God is with us. That reassurance gives us faith, and faith, according to Hebrews 11:6, pleases God.

And to him who believes, indeed, all things are possible.