Recently, CUREkids Coordinator Christopher Mullen, of CURE Uganda, spent two days at CURE Kenya. This is what he observed.

On a windswept hillside over looking Rift Valley, you will find a place of joy where children are healed and hope is restored, a place that will challenge preconceived notions of what a hospital should feel like. When most think of hospitals, there is an idea of pain, suffering, misery, and boredom. It’s the last destination one would want their child to go. CURE Kenya, an orthopedic pediatric hospital, challenges that. Their goal is to heal children and to make it possible for them to walk and run, to have a higher quality of life, and, most importantly, to show them the love of Jesus. 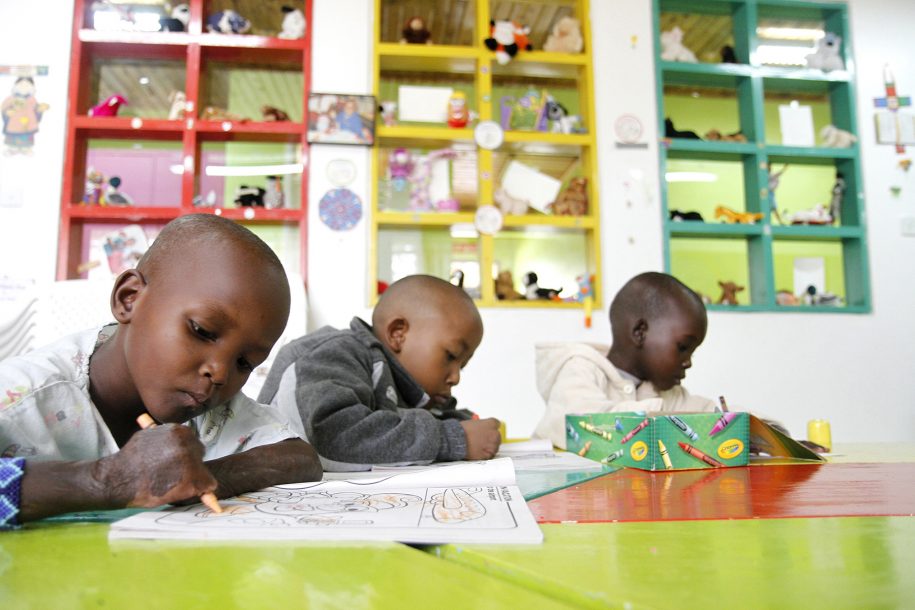 Vivian colors in the playroom with Wayne and Vitalis.

Upon arriving at CURE Kenya, you are met with crisp mountain air and a bright, multi-colored playground, which is equipped with a swing made for a wheelchair, a slide to challenge the bravery of any child, teeter totters, and a playhouse. As you enter the hospital, there is an explosion of color on the wall and a light show on the ceiling. The aroma from the kitchen greets you, and the smell of vegetables and cooking meats fills the air. 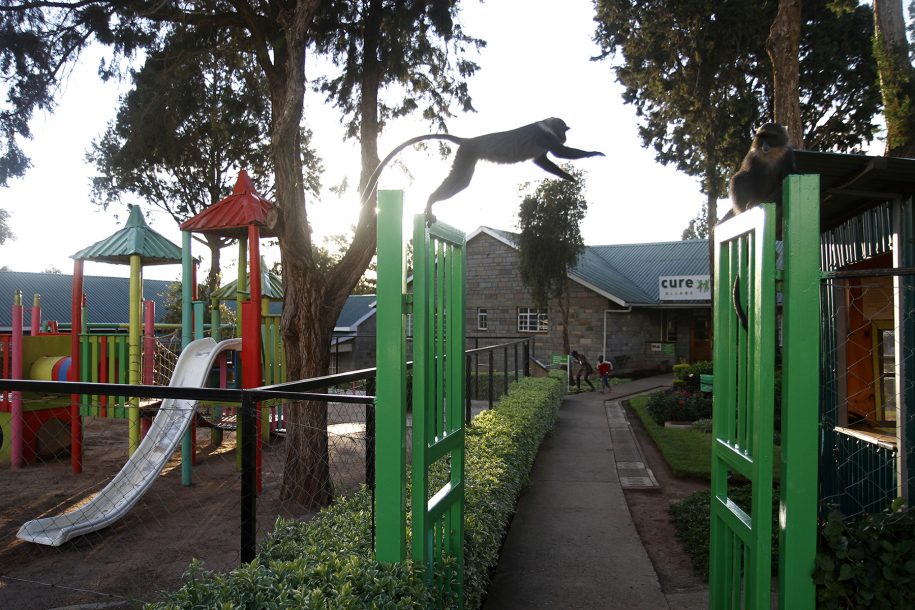 A monkey leaps across an entrance to CURE Kenya.

Leaving the allure of the kitchen and heading towards the ward, you pass by the playroom where there is a great deal of laughter and smiles. As you move down the hallway, you look through small square windows with stuffed animals and toys. Beyond that, in the center of the room, there is a large circular table, which is the perfect size for a child to sit. In the corner, there is a fleet of tricycles awaiting their riders. On the bookcases, in the closets, and under the benches, you will find a plethora of toys, books, puzzles, and stuffed animals, which bring distraction and entertainment to the kids of the AIC-CURE International Hospital. 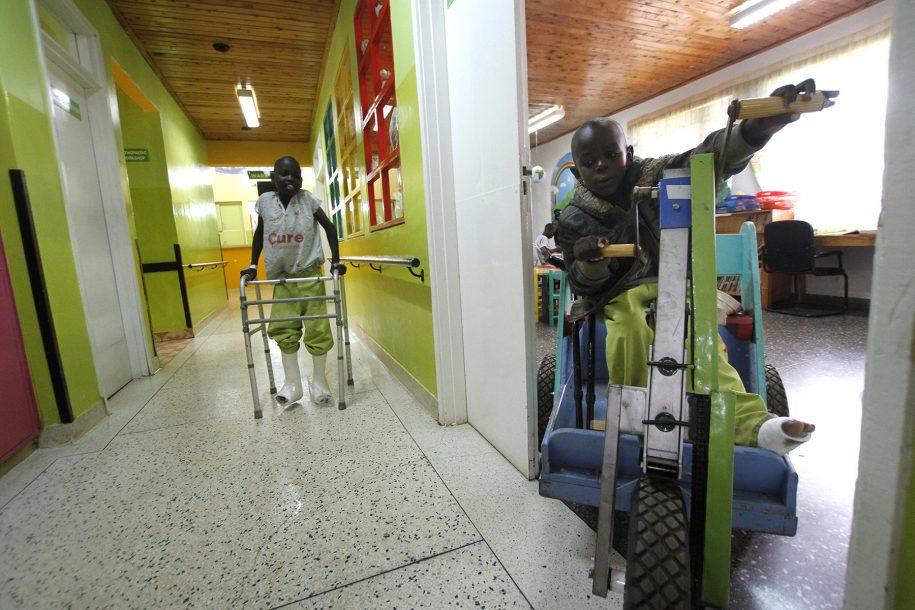 Godwil rides a tricycle as he nearly exits the playroom. Walking up on him is Shadrack.

The main ward is made up of four sections with six beds each. They are lettered A – D, and there are additional E and F sections along with a section for adults and families who would like more privacy. Just before 6 a.m., the ward starts waking up. The nursing staff obtains the vitals of the patients. This is soon followed by morning rounds, which is a time for medical staff to check up on the patients to see how they are doing and make a plan for the day. As ward rounds come to an end, a cook from the kitchen enters placing two carts at the entrance to the first section; patients and caregivers receive a tall stack of bread and an egg with a cup of tea. 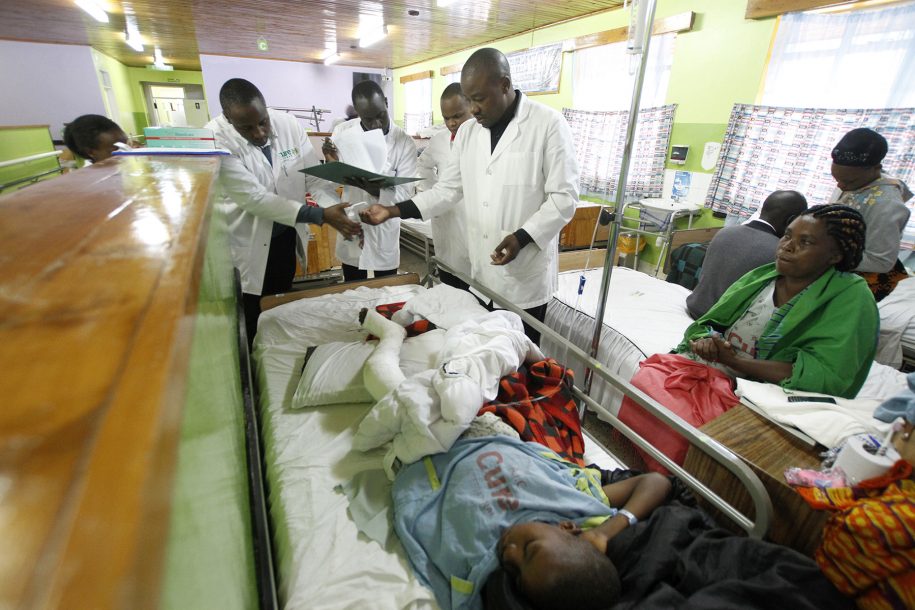 Soon, you can begin to hear the sounds of worship. Every morning, the staff meets at 8 o’clock for devotions, which starts with songs, reading the Bible, discussing the day’s topic, and praying for the day ahead. As the morning devotion winds down, the Operating Room (OR) staff have called for the first patients of the day. They soon enter the OR wing, and travel down a hallway before coming to a redline with the word STOP. The patients switch shoes, and proceed to the waiting room where they are cleared for surgery. Their nurse prays for them, and they are taken through double doors. 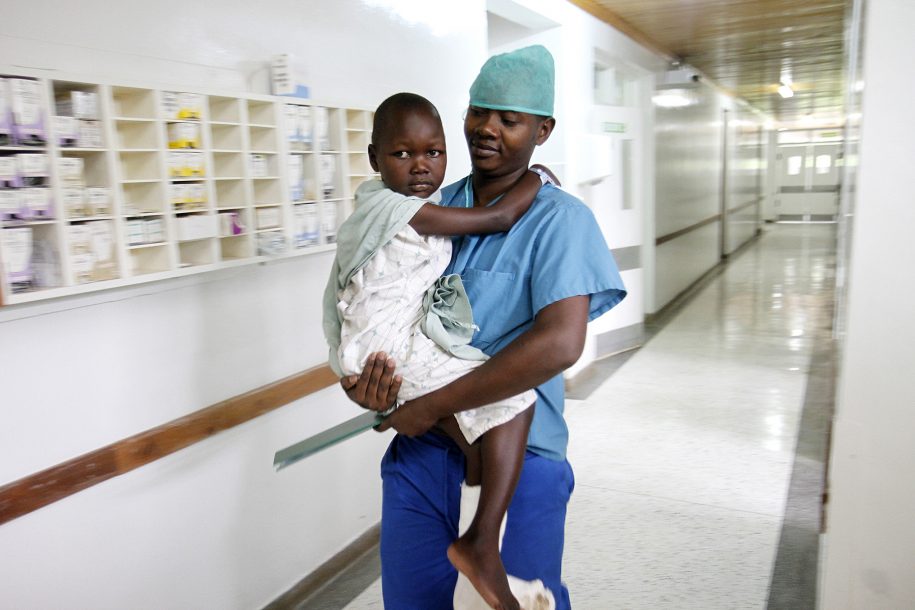 Sunday is held by Gilfred, a PACU nurse, as he takes him to the PACU for a recasting.

As patients make their way to the operating table, they look around at the nurses and anesthesia team who do their best to make them feel comfortable. They joke with them and even do a little dance to bring a smile in an otherwise scary situation. As a patient drifts off to sleep, the scrub tech returns, the instruments are laid out, and the staff is soon joined by the surgeon. The room goes quiet and still for a moment as they bow their heads and a prayer is said. Then, the surgery begins. You can hear music playing from a laptop, which soon becomes drowned out by the sound of chiseling, drilling, and cutting. Soon, the most dreaded and scariest part of the hospital visit is completed and the patient is moved to the post-anesthesia care unit (PACU). The patient then wakes up and is taken down a hallway where he/she is met by a parent or guardian. The patients then are taken back to bed, or they go to the high dependency unit (HDU). 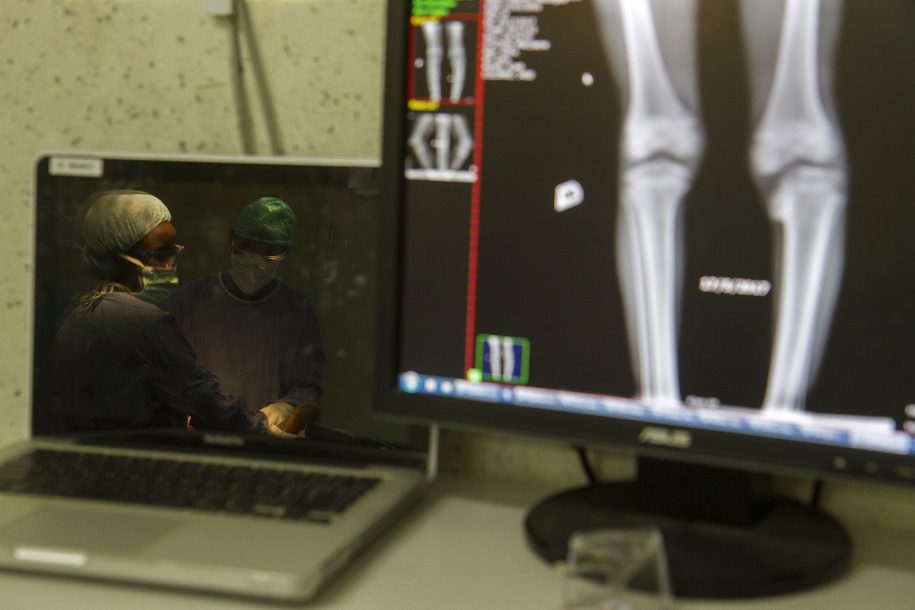 Scrub Technician Veronica and Dr. Nguku are reflected in the screen of a laptop as they work on Mwongela. Next to the laptop is the X-ray of Mwongela’s knees. He has Blount’s disease.

By midmorning, the playroom is full of children. The table in the center of the room begins to fill up with kids, and the TV in the corner eventually draws the attention of even the most avid colorer. Others focus on putting together puzzles. It’s also “rush hour” in the playroom as several kids on large tricycles pull and push pedals with their arms. The room is just wide enough for them to get around the table. A member of the Spiritual Team helps direct traffic insisting everyone goes counter clockwise. She soon becomes busy painting flowers on a cast. A playful five year old watches intently over her shoulder as her friend’s cast is painted. With no cast of her own, she asks to be painted. She spends the rest of the day running around with an orange design proudly displayed on her forehead. 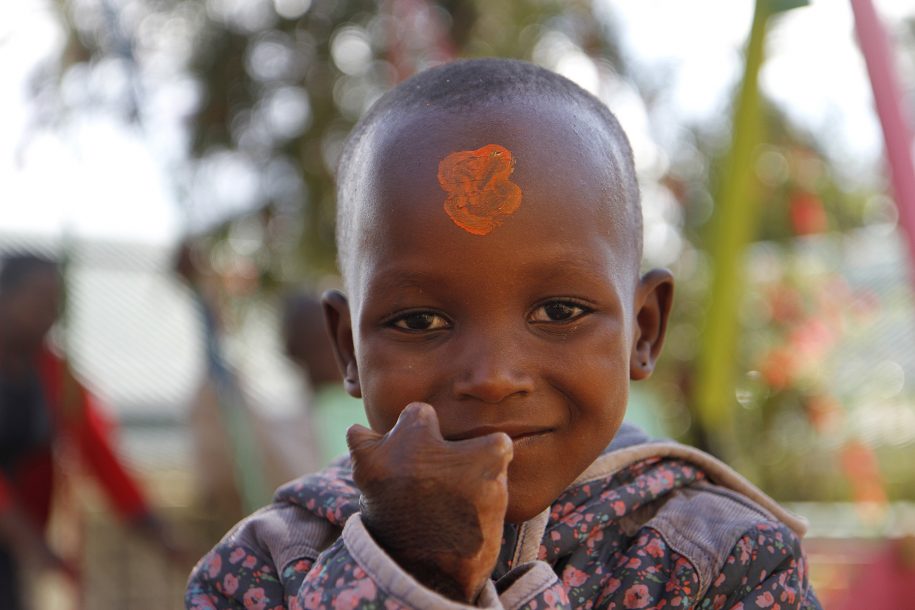 Vivian smiles on the playground. She got a design painted on her forehead while she was watching a cast get painted with flowers in the playroom.

With the bright afternoon sun hitting the playground, kids soon flock there. The swing set becomes full, and bubbles are introduced. Kids sit on their swings and blow bubbles at one another. Those  without casts soon flock to the playhouse with tunnels to crawl through, a bridge to cross, and a tower to slide down. One little girl sits at the top of the slide for a great deal of time before deciding not to make her descent. In the corner, there are balancing bars and stairs with a couple kids sitting on top of them playing catch with a beach ball. 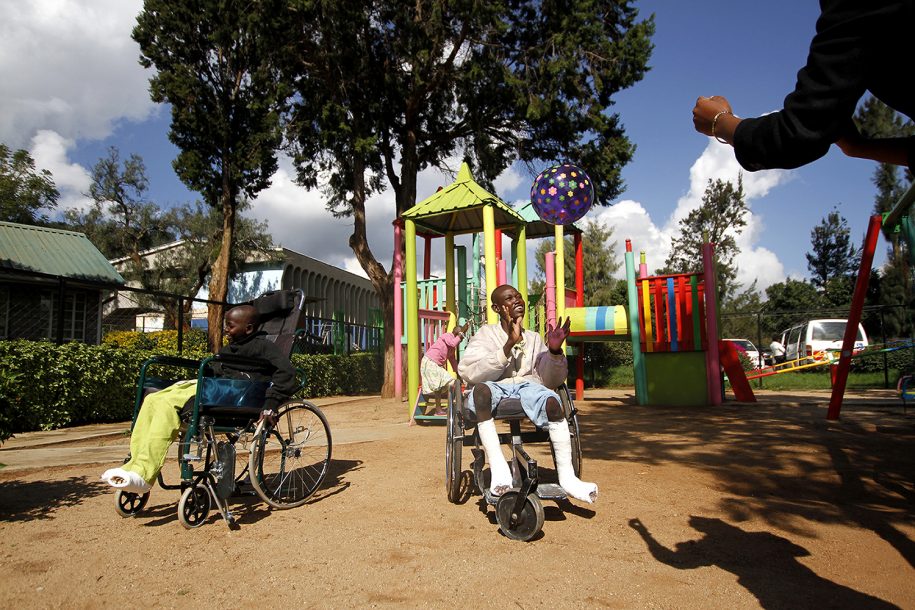 Mary, of the Spiritual Department, tosses a ball to James while they play on the playground.

In the late afternoon, after wrangling all the kids from the playground, the Spiritual Team moves into the ward. They set up and lead a church service for parents and patients. It opens with songs of praise. The sounds of clapping and singing fills the room. Parents soon share testimonies, and the Spiritual Team shares stories from the Bible. The service ends with a time of prayer. 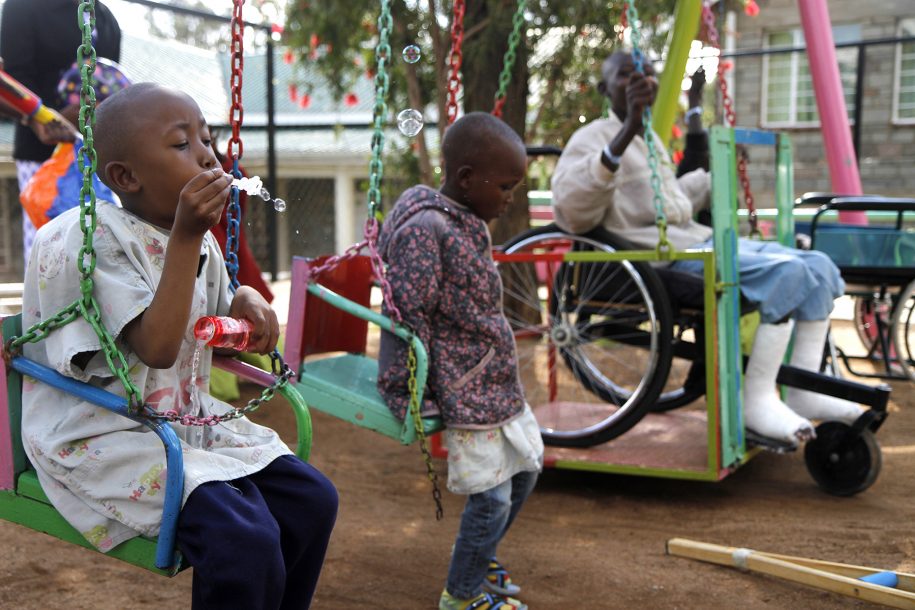 Wayne blows bubbles as he sits on a swing on the playground.

As the day winds down, the day shift leaves and the night crew comes. The patients have dinner, and soon the television above Section C is turned on. Four or five children rush over to C2, an empty bed, and claim it as their own. Their attention is fixed to the evening news, and then to Spanish soap operas dubbed in English, which does little good for the kids who all speak Swahili. With their attention fading, they begin entertaining themselves by simply acting silly. Eventually, with their parents already asleep, they, too, turn in for the night. 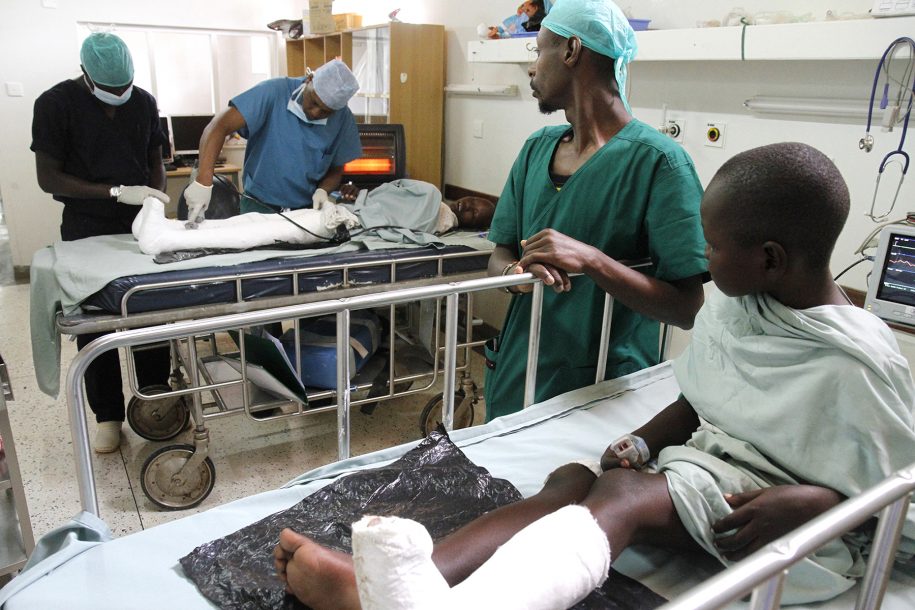 Sunday and Peter watch Juma get recasted. His doctors were making sure his left foot and the tendon in his right leg were fine.

There are few places with an atmosphere like CURE Kenya. There is an amazing sense of love and joy. The kids in the ward are joyful; they are joyful because they are being treated by the staff in a way that would make a person in a cast with pins sticking out of their leg happy. 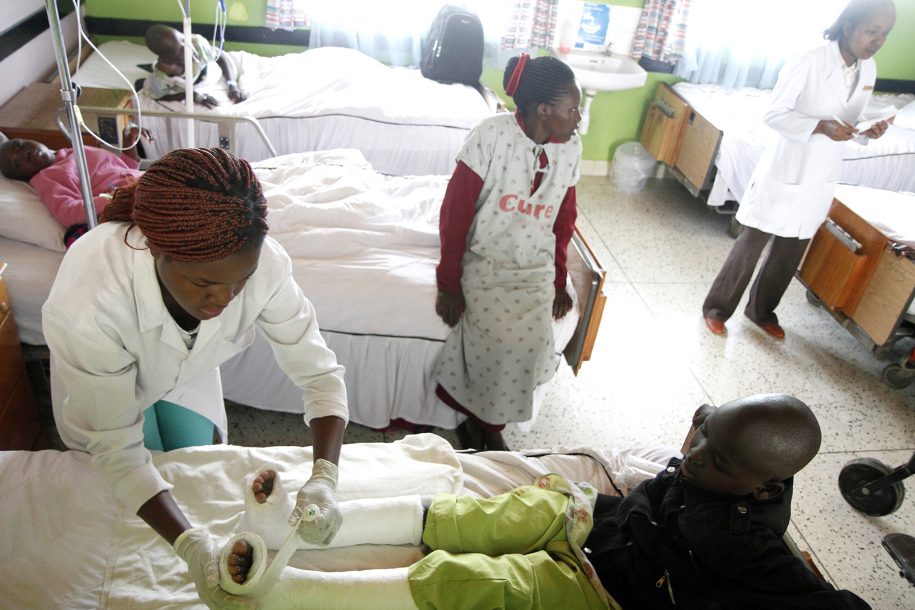 Davin, an orthopedic plaster technician, rewraps Shadrack’s cast. He had an operation for clubfoot two days prior.

The staff—from the surgeons to the volunteers—didn’t just go through the motions of doing their jobs, but they chose to love the kids they were serving. They could easily do the surgeries, check vitals, clean the ward, and feed the patients without love, but instead they do something special and unordinary: they choose to love. They choose to care for their patients, and not just on an physical level, but on an emotional level as well. They show scared little kids that they are safe, that they are valued, and that they are cared for. Others break the boredom of a hospital with bubbles and giggles, sitting to talk and listen, joke and laugh. Those that serve at CURE Kenya are much more than physical healers, they are lovers. They love those whom they serve, and in doing so, those who attend the hospital encounter God’s love and leave with much more than just physical healing.

The actions, behavior, and personality of CURE Kenya can be summed up with this quote by Mother Teresa.

“Not all of us can do great things. But we can do small things with great love.” 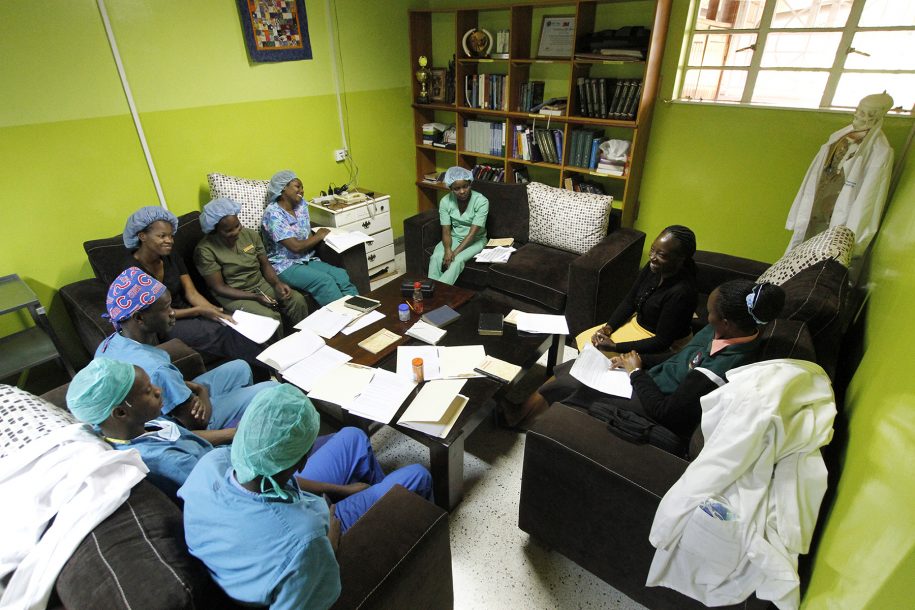 The OR staff meets for morning devotions in the OR lounge.