More than 250 participate in 10K to benefit CURE Uganda Andrew a nurse at CURE Uganda and Moses a social worker at CURE Uganda hold hands and celebrate as they run the Eastern Marathon for Vulnerable Children May 6.


“The reason why we did this marathon was to (help raise) funds to support children with hydrocephalus and spina bifida and other neurological conditions at CURE Uganda,” said Dr. Stewart Wamukangu, Chairperson of the organizing committee for the Eastern Marathon for Vulnerable Children.

“When I saw the posters to help these vulnerable children, (I thought) why can’t I run and help them?” said Savior Otingcwiny, a 29 year old from Mbale. He won CURE Uganda’s first Eastern Marathon for Vulnerable Children.

“If they made it short like this, I knew I would win,” said Savior about the length of the course.

The run to benefit CURE was set up as a 10K. Savior was followed by Francis Ocira—who finished second—and Otingcwiny’s training partner Ivan Bogere, who finished third. The organizing committee estimated there were between 260 and 300 runners and walkers who participated.

After the marathon finished, the participants met under several tents to listen to local government leaders, staff members of CURE, and patients who have benefited from CURE Uganda’s services.

Jacquline Nandudu, the mother of a former patient at CURE, gave a short testimony.

“If it was not for CURE, I would not be standing here with Mark,” said Nandudu. When Nandudu’s son Mark was only four days old, he had surgery at CURE Uganda to treat his spina bifida. He is now 8 years old and in second grade. Following Nandudu’s speech was Mbale District Woman Member of Parliament, Nakayenze Conny Galiwango. She praised the great impact of the hospital and also promised to partner with Mark to ensure he gets a good education.

The Eastern Marathon for Vulnerable Children was held on Saturday, May 6. Runners contributed 10,000 Uganda shillings (approximately $3 USD) as a registration fee for the run. Local businesses, politicians, and other members of the community all donated money to support patient care at CURE Children’s Hospital of Uganda and its mission of healing the sick and proclaiming the kingdom of God.

“It was a tremendous success… I’m very proud of the organizing committee and our staff. I think this will become an annual tradition for the hospital,” said Tim Erickson, Executive Director of CURE Uganda. 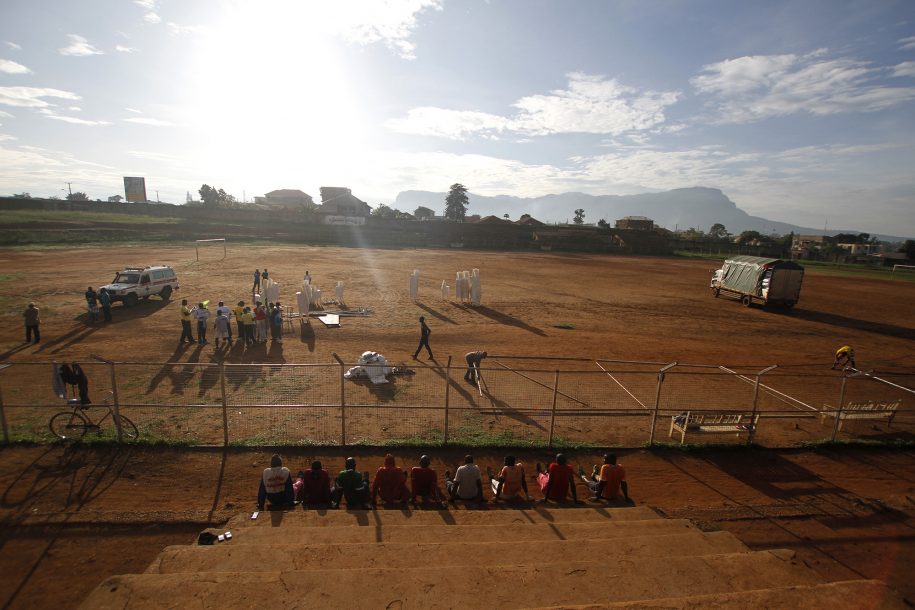 Tents are assembled at Mbale Municipal Stadium as runners begin to meet prior to the start of the Eastern Marathon for Vulnerable Children held on May 6. 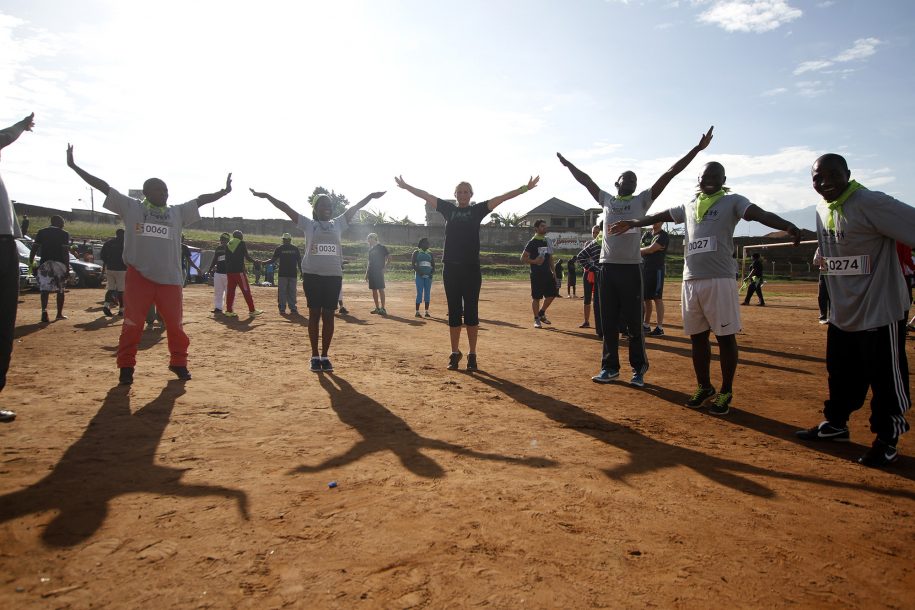 Runners stretch in Mbale Municipal Stadium prior to the start of the race. 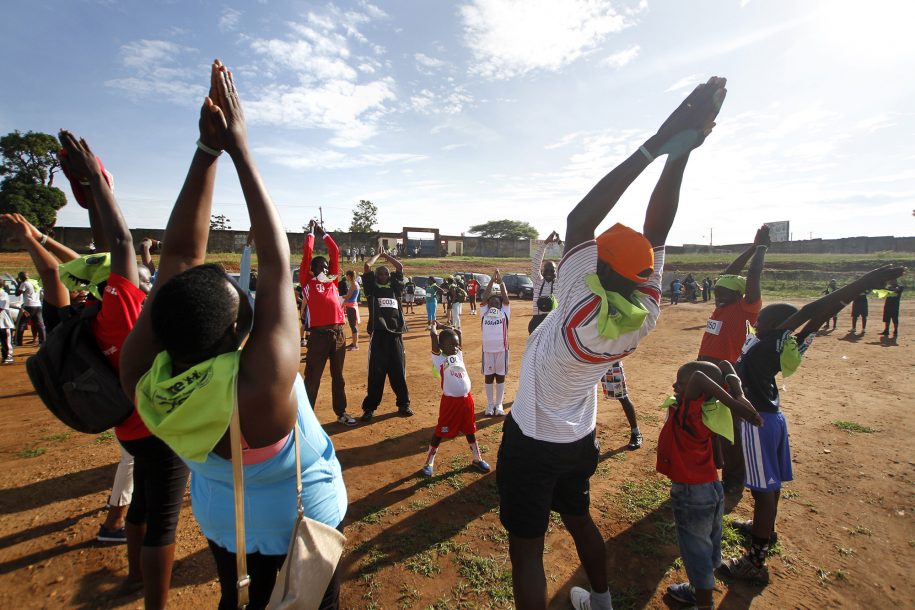 Runners stretch prior to the start of the race on May 6. 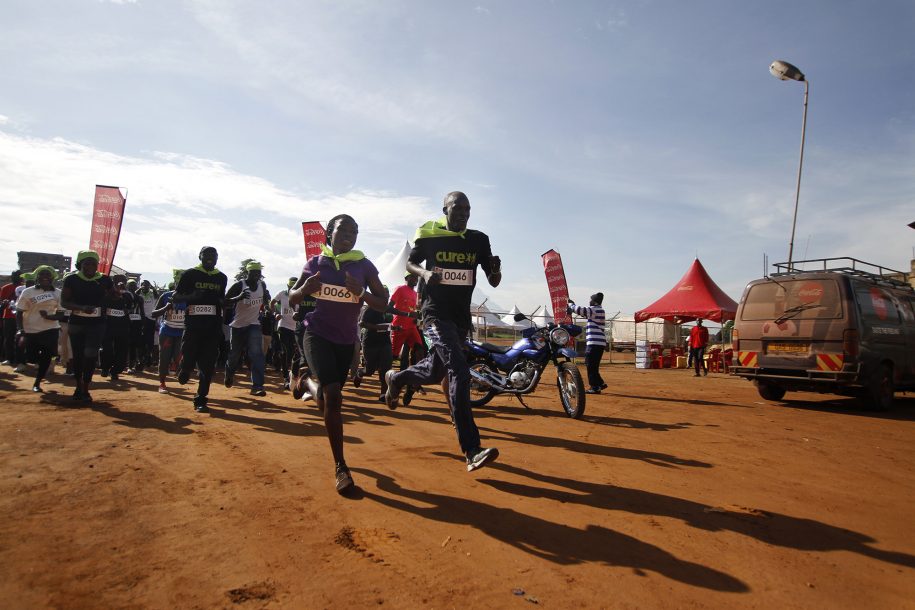 Runners race out of the gate at the Mbale Municipal Stadium, which was the start and finish line of the Eastern Marathon for Vulnerable Children. 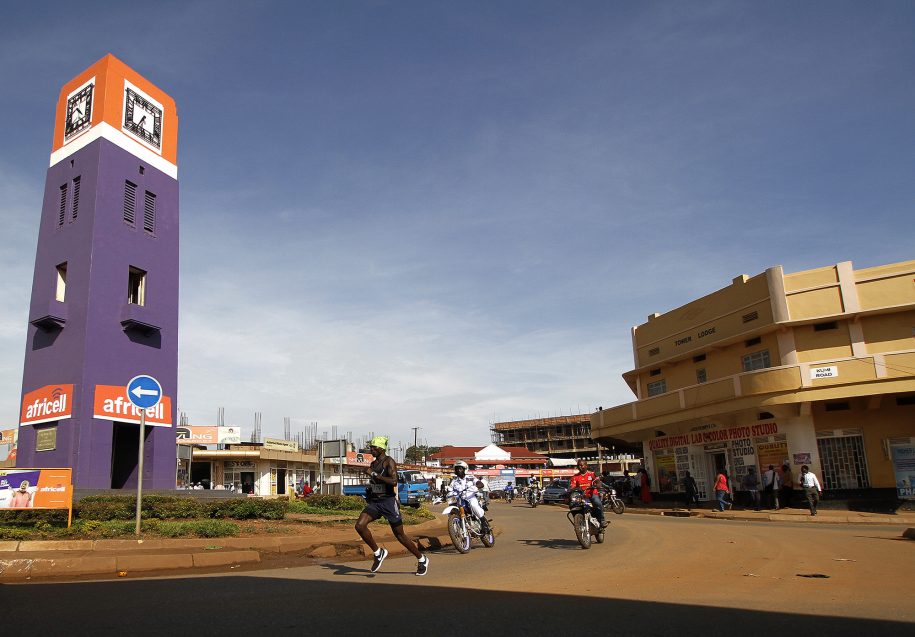 Savior Otingcwiny runs past the clock tower in the center of Mbale town, followed by his police escort. Otingcwiny won the marathon. 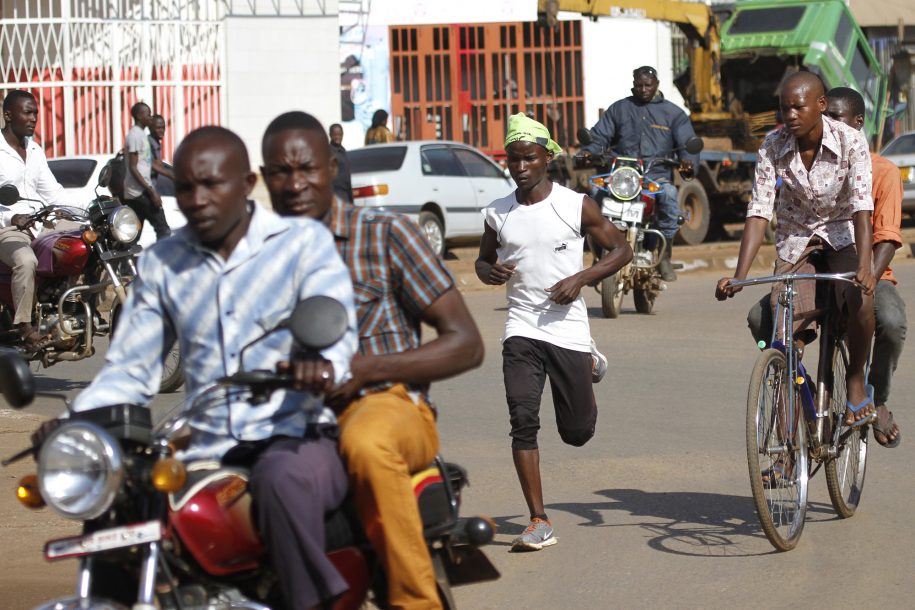 Ivan Bogere runs through traffic on his way to third place. 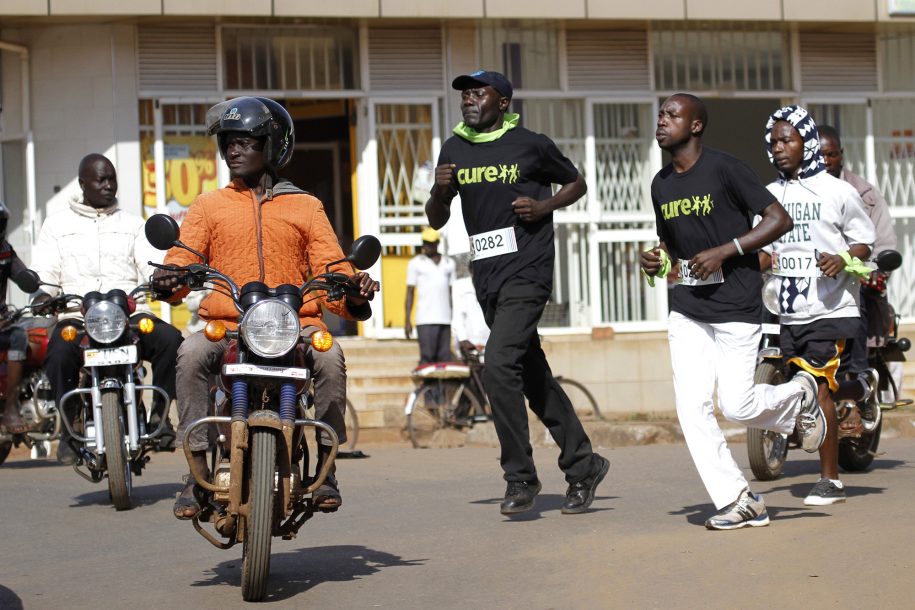 Sam Khaukha, Ward Clerk, and Justine Etaku, Database and IT Associate for CURE Uganda, dodge traffic as they pass through the roundabout in the center of town. 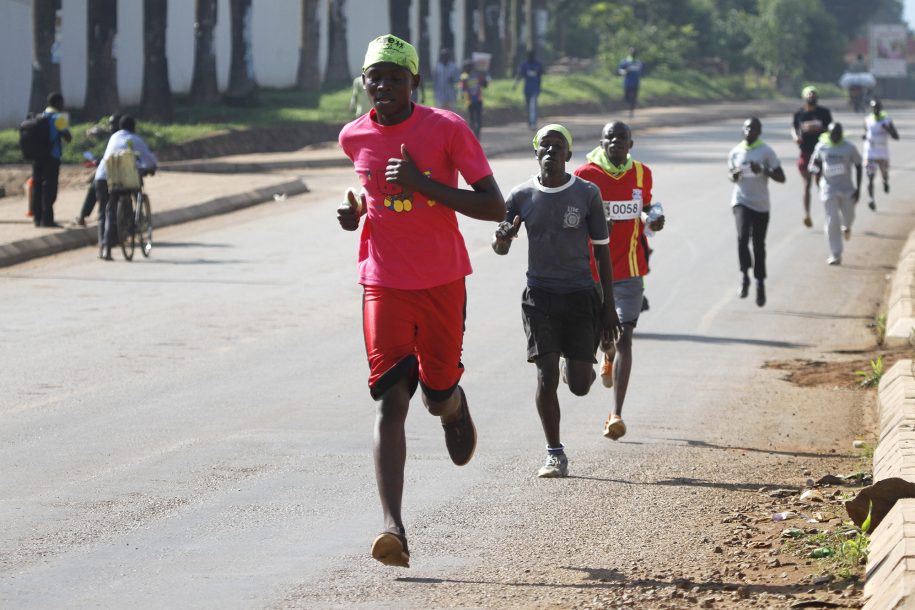 Runners race down Tororo Road; one of the few down-hill stretches in the Eastern Marathon for Vulnerable Children. 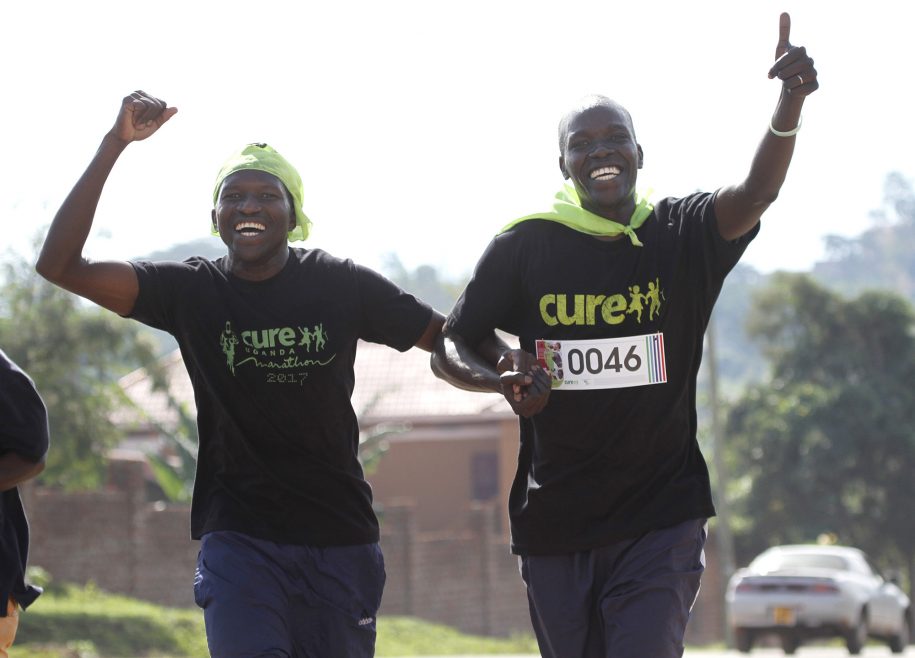 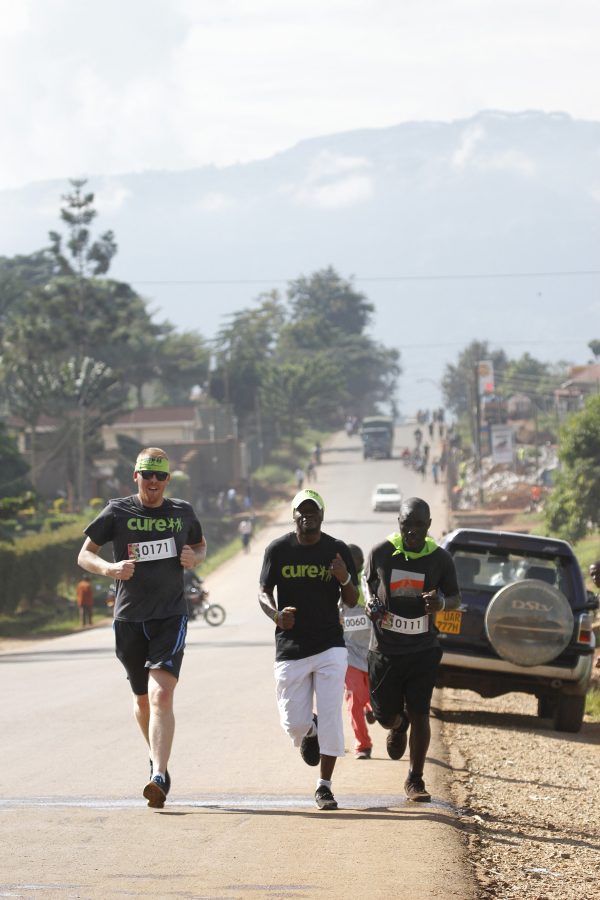 From the left: Tim Erickson, Executive Director of CURE Uganda, and Brian Kaaya, IT and Health Info Administrator for CURE Uganda, descend past CURE Children’s Hospital of Uganda. 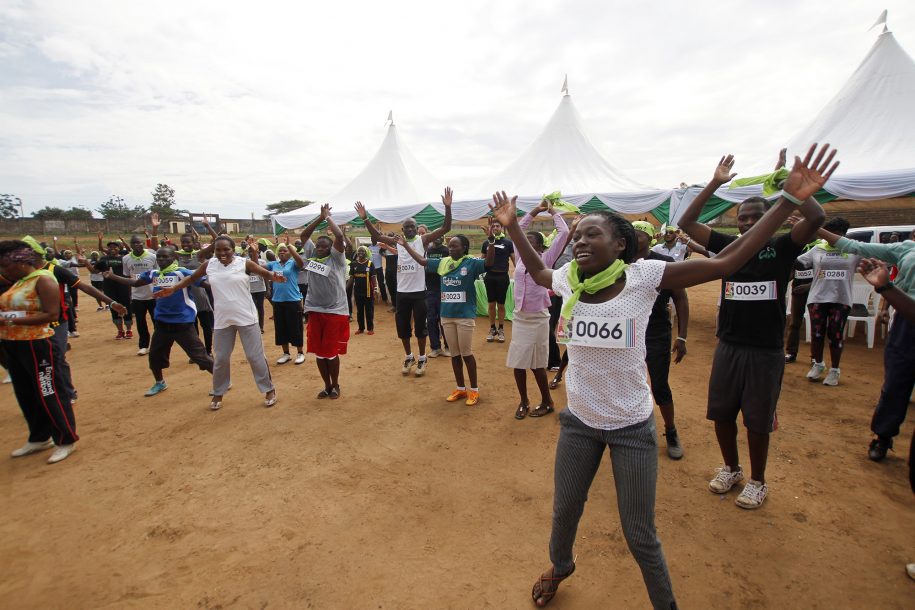 Runners stretch after the marathon. 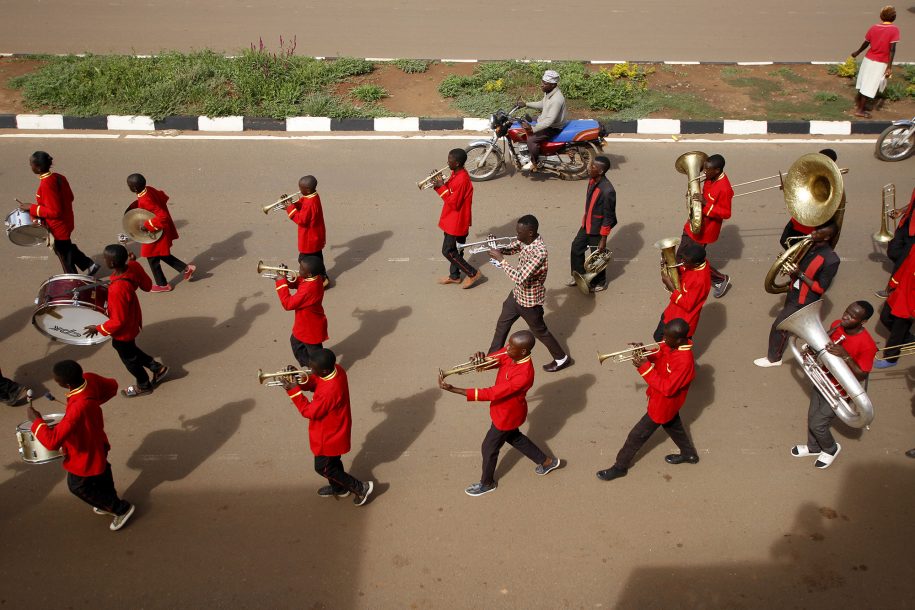 A marching band leads the way for walkers as they go down Republic Street. 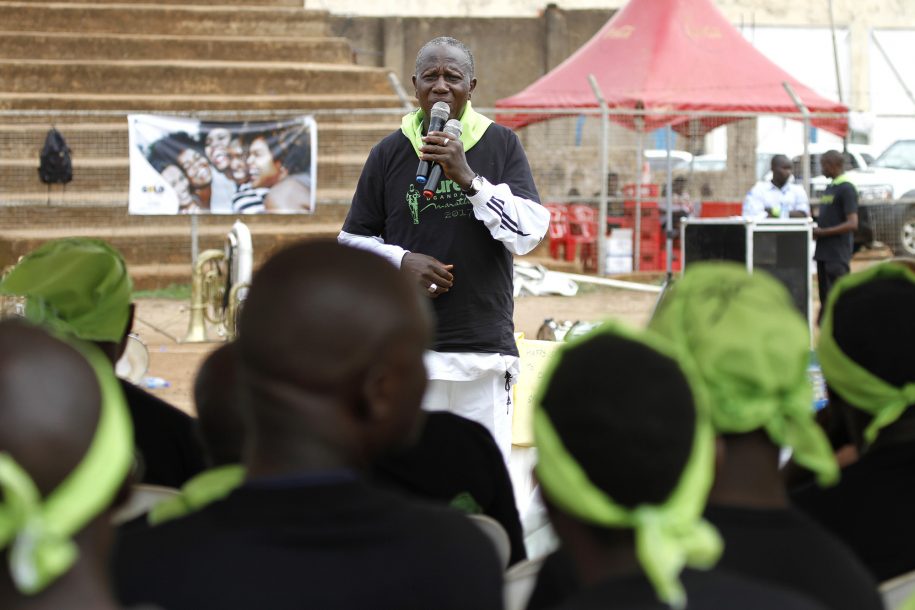 Umukuka (King) Bob Mushikori, of the tribe of Bamasaba, speaks to the politicians, runners, and staff members of CURE at Mbale Municipal Stadium after the Eastern Marathon for Vulnerable Children. 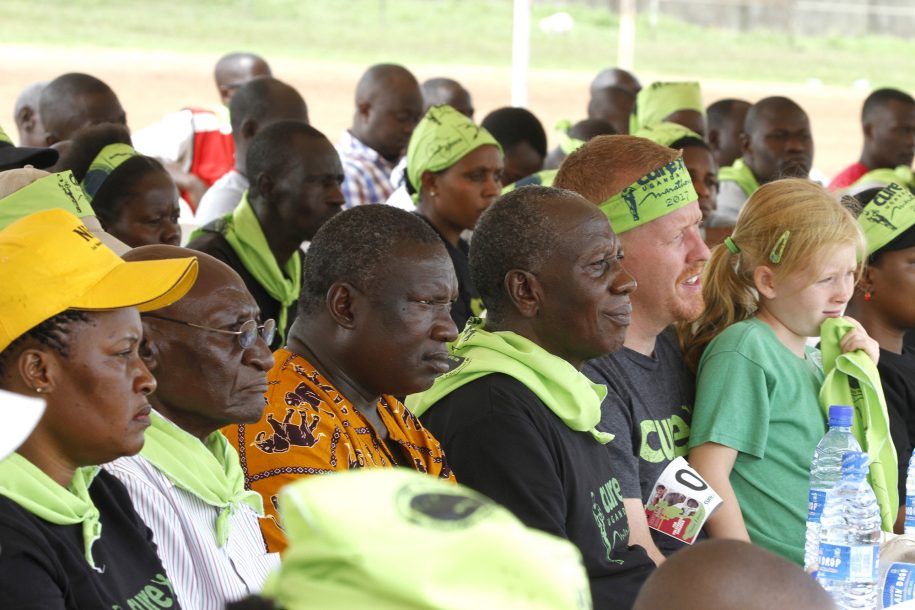 From the left: Mbale District Woman Member of Parliament Nakayenze Conny Galiwango; a representative from the Christian Child Care Project; Nathan Okia Kisengede, Minister of Youth and Sport for the Kingdom of Teso; Umukuka (King) Bob Mushikori, of the tribe of Bamasaba; and Tim Erickson, Executive Director of CURE Uganda, and his daughter Isabel listen to speakers at Mbale Municipal Stadium after the marathon. 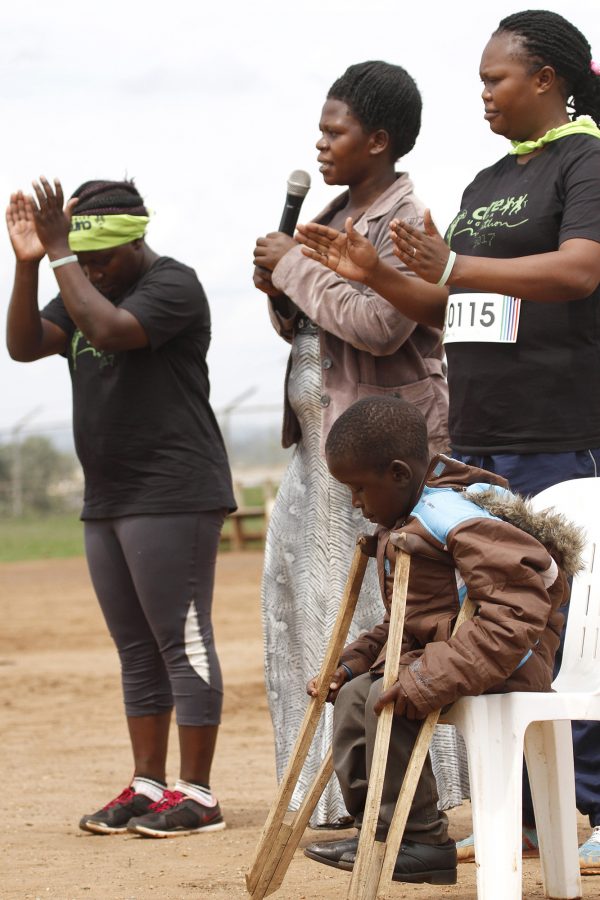 Mark Magombe, a former patient at CURE Children’s Hospital of Uganda, sits and listens to his mother Jacqueline Nandudu speak to the runners, politicians, and CURE staff members after the Eastern Marathon for Vulnerable Children at Mbale Municipal Stadium on May 6.