News & Stories A clubfoot journey: A tale of three mothers

A clubfoot journey: A tale of three mothers The first things we noticed were the bright, colorful, and vibrant dresses. Beautiful colors of orange and pink accompanied by matching lipsticks greeted us. The color combinations were bold, leaving an air of spring. The three women sat down in front of us each with a different demeanor.

The first woman held a baby on her lap and moved her legs rhythmically up and down to comfort the sleeping child. The woman next to her sat with her hands crossed, looking uncertain. The third woman sat back comfortably and watched the other two with curiosity. The trio presented a little girl who they said was born with clubfoot. After brief introductions, they were advised to return for actual treatment a few days later because we wanted them to meet other families whose children were born with the congenital defect.

The next time we met up with them, they wore more beautifully colored dresses. The baby was wrapped in a pink blanket with a rose finish. We ushered them into the counselor’s office where we sat to chat with them. The trio was definitely a tight group of women, and the baby was fast asleep again. She looked tiny in her little blanket, but at just a few weeks of age, she was a great candidate for the Ponseti treatment of clubfoot. 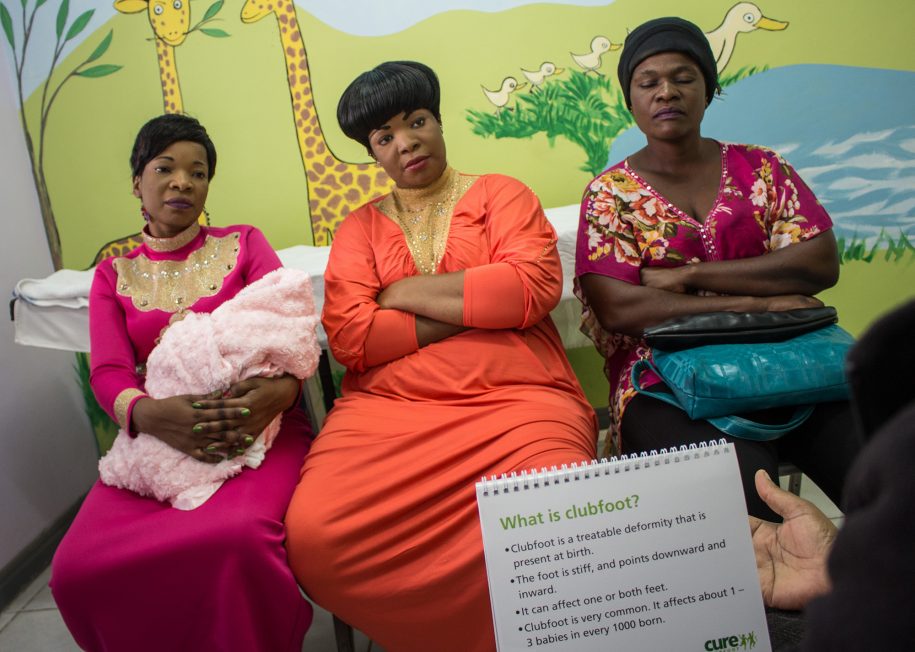 The funny thing was that the woman who had been carrying the baby since our initial meeting was actually the aunt. The lady who sat in a relaxed manner was the cousin to the mother of the baby. The mother of the baby was, in fact, the lady in the beautiful, bright orange dress. She sat quietly and kept her arms together. Two sisters and a cousin sat in front of us!

“Why is it that the aunt always holds the baby?” I asked curiously gazing at the mother who was looking down at her feet. We could feel her discomfort and impatience, and we saw her flinch every time she heard a baby crying.

“Because we are all Faith’s mothers, and we each have a role to play,” said the aunt, whose name was Betty.

In Africa, there is a saying, “It takes a village to raise a child.” A few days before a woman gives birth, it is tradition that a close female relative moves in with an expectant mother, so that they both help take care of the baby. 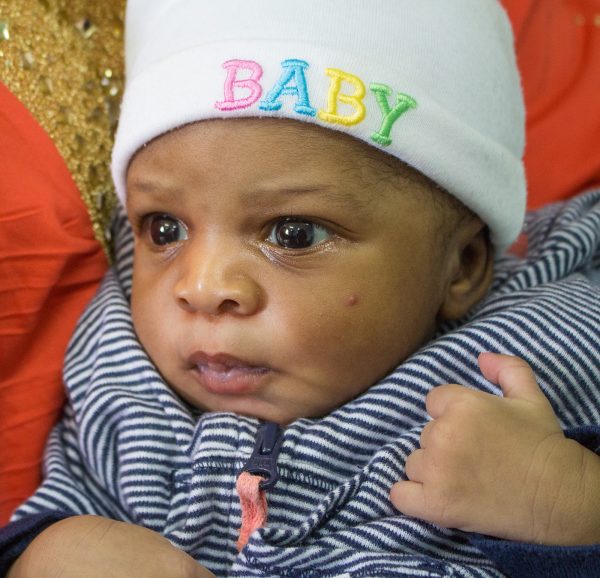 Betty, who was the older sister to Mecleus, was helping take care of Faith, the baby. Things changed when Faith was born with clubfoot, which was something that Mecleus, Faith’s mom, did not expect because she already had two children who were born without a disability. Afterwards, their cousin, Ruth, stayed with them to ensure the home ran smoothly while Mecleus recovered from childbirth and Betty looked after Faith.

Mecleus and her family were from one of the busiest residential areas in Lusaka. Their home was a stone’s throw away from Beit Cure Hospital in Zambia where CURE Clubfoot hosts a clinic every Friday. They had never heard of clubfoot until Faith was born. The situation definitely changed when Faith was born with clubfoot. Betty had to take on a more motherly role, providing both physical and emotional support. 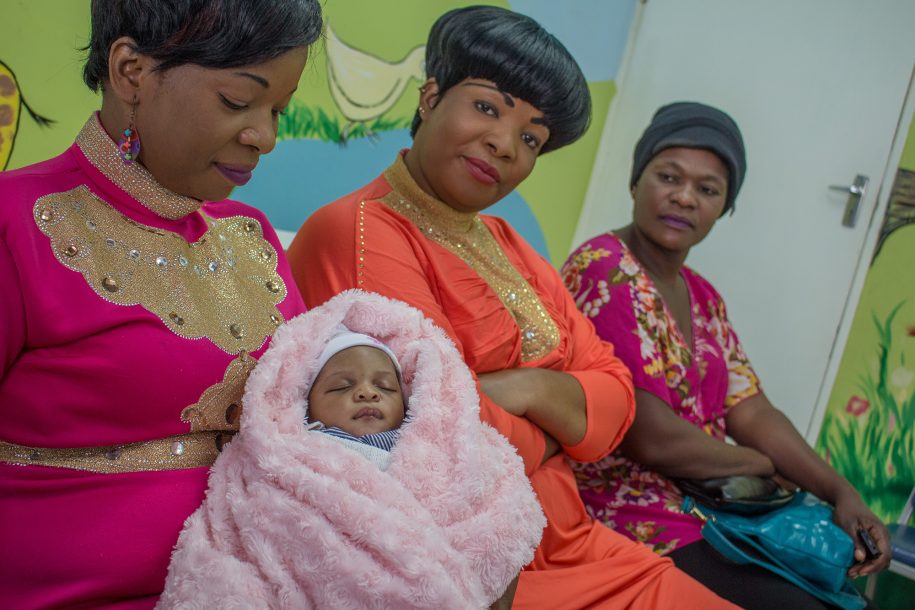 While talking to the counselor, Mecleus had her arms folded together as Betty held onto Faith. She told the counselor that she was saddened when she saw her baby for the very first time, right after birth.

“I cried because I felt a deep pity. I was sad because I pitied the fact that my child was born with such a condition and that she was going to suffer for the rest of her life,” said Mecleus.

We asked about her husband and how he felt when he saw Faith for the first time.

“He also pitied the child, but accepted her the way she was. He just doesn’t want her to suffer, but we had an in-law who asked us whether there was someone in our family who was disabled; not from their side of the family, but from ours. So, that hurt us a little bit,” said Mecleus.

After counseling, they were led into a waiting room where they would have time to sit and talk to other moms. Mecleus sat in the company of mothers who held clubfoot babies. They were waiting their turn at the casting table feeling a bit more relaxed. She took little Faith and cradled her. For the first time, she looked more open and comfortable. 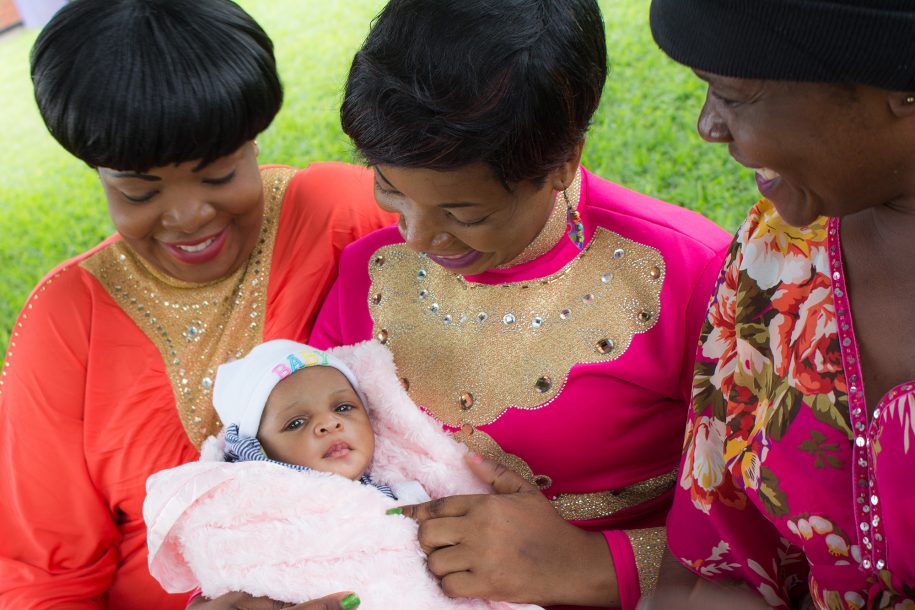 “Last time we were here, we met a mother whose baby’s feet were bent, just like Faith’s. Now, the baby is two years old and running up and down. That little information really inspired me and made me feel more confident that my child will be okay,” said Mecleus.

The trio sat close to each other. They all got up to meet the physiotherapist. The three heads bump close to each other and admire the little feet on the table. They are thankful that little Faith has not cried as much as the others.

They spent the rest of the morning talking to other mothers and sharing experiences. Mecleus’ voice could be heard above her aunt and cousin’s voice laughing and creating friendships with the other moms. This is why it is important to have one-day clinics in the same room. The mothers bond and talk while observing treatment.

Faith received a cast on one foot because the other foot was fine. Through the process, Aunt Betty’s hands were on Faith comforting and kissing her. Mecleus looked on and held Faith’s tiny hand and observed the casting process. 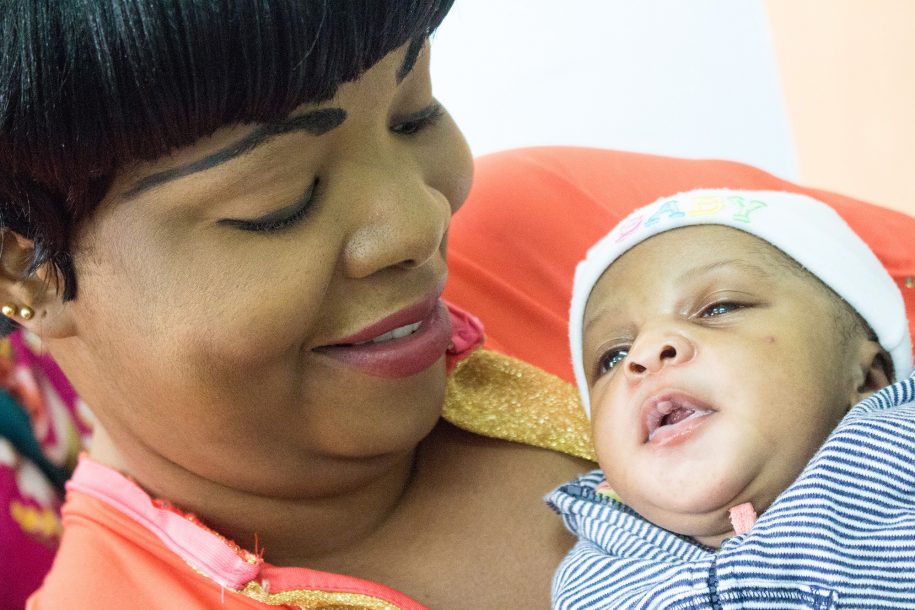 At the end of the casting, Betty carried Faith in her arms followed by Mecleus who had a blanket that they would wrap around Faith. Ruth joined them admiring the new cast and helped clean the plaster fragments from Faith’s hands.

The three women have decided to embark on the clubfoot journey together.

“With three of us here, we can all learn how to take care of Faith and learn more of clubfoot. It has already happened that she was born with clubfoot. There is nothing we could have done about it then, but there is definitely something we can do about it now. She has three mothers,” said Mecleus.

Mecleus checked her makeup and smiled. She took her baby from Betty, so she could take a photo with Faith. She showed off the new cast proudly. It was clear the morning had a great impact on Mecleus who came in somewhat defensive, but she left with a shrieking laugh and radiant smile.

“Once she starts wearing braces, I want her to wear those cute looking ones which look like sandals. I want her to look good even in her braces!” Mecleus laughed.

She carried her baby proudly with her orange fabric swinging behind her like a train. Baby in hand, they walked off into the chilly Lusaka air. Their bright dresses were blown by the wind reminding us of how a united family unit plays a strong role in healing. 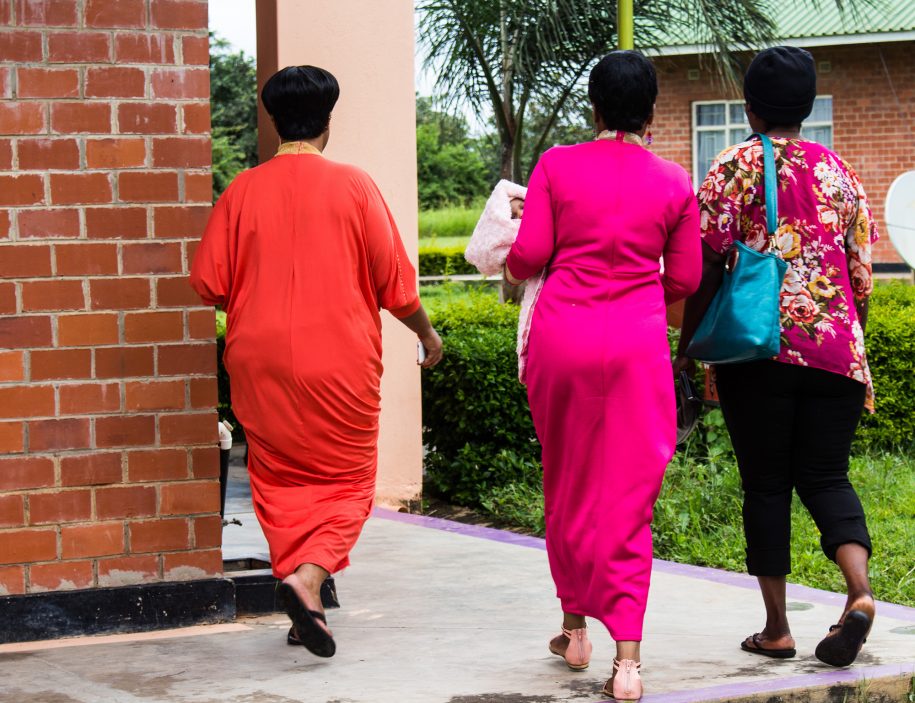