Mead Minutes: Wonders of the World 
Greetings from Lusaka! Prior to arriving in Zambia, we discovered an unexpected opportunity. Monday was a national holiday, so we arranged a local, long weekend trip. As we tell our kids, “We are spending your inheritance.” Jana and I had the opportunity to travel to Livingstone and enjoy the spectacular scenery of the Victoria Falls. Unbelievable! 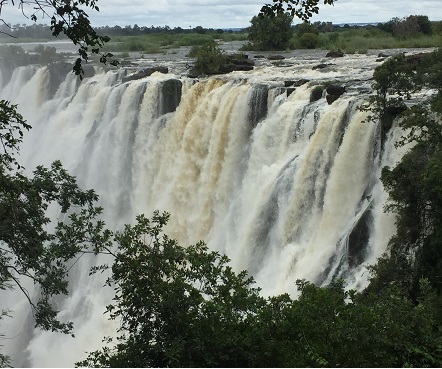 We left early on a Saturday morning. Livingstone was about a six-hour drive from Lusaka. I felt drawn back to times living in Kenya. I was shifting with my left hand, driving from the right side of the car, and traveling along the left side of the roads. We started with a series of turns and roundabouts through town. As we left Lusaka, the scenery opened up. Long-waving grasses among an abundance of trees stretched across the vista. Rolling hills with gentle, winding turns made for fun driving. After an hour, we came to the toll booth: 20 kwacha, about $2.00, helped pay for improvements.

We had been warned that the next 70 kilometers of road was “a bit dodgy.” There were indeed many potholes, but I have traveled on roads far significantly worse. I always smile as I remember an old Alan Arkin-Peter Falk movie, The In-Laws. “Serpentine Sal, Serpentine!” We “serpentined” and dodged holes and cars. All of a sudden, the road improved and a few hours later, it became even better. 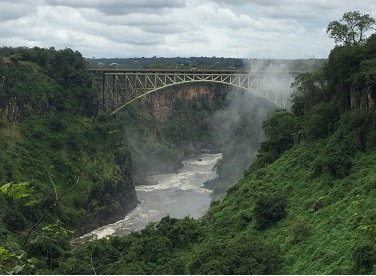 Driving along the two-lane road, Jana and I discussed the similarities and differences with our drives to the Kenyan Maasai Mara. Along Kenyan roads, we would see many mixed herds of cattle, sheep, and goats. We saw fewer, small herds of cattle in Zambia. We did see one large group of goats near a Zambian village. Wild animals periodically appeared along Kenyan roads; we saw the wildlife in a game park in the Livingstone area. Both countries have traditional homes of different styles intermixed with cement or block homes. Zambia has many more trees; Kenya higher hills. Both rides, although challenging at times, were enjoyable with a beautiful view of the scenery. 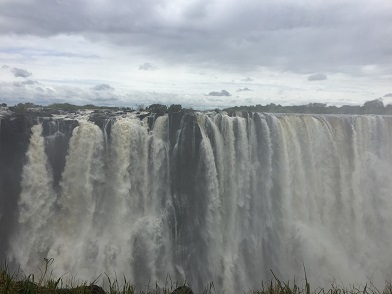 We arrived at a bed and breakfast that a new friend had selected: Chanters Lodge. Finding our room clean and nice, we unloaded and took off for the falls. I cannot begin to tell you how beautiful the falls are. It is the rainy season currently, so there is an abundance of water flowing over the falls.

We had several viewing options. Since it was later in the day, we walked across the bridge from Zambia to Zimbabwe. You gain an overall view of the falls. Cool mist billows up and recedes. Far below the fast-moving Zambezi River reforms in the gorges. 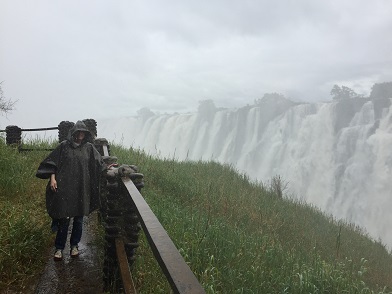 Walking along, people arrive selling their wares. We were not great tourists. We already have many carvings from Kenya. Arriving at a mesh enclosure, we discovered a bungee jumping location. No, I did not even consider trying this. I do not tolerate heights very well. You would have to literally throw me off the bridge. Soon, a young woman approached and was strapped in for the plunge. She hopped to the edge, spread her arms widely, and, on the count of three, jumped off. Down, down, and down she fell. The cord stretched and slowed her descent. Near the water, she stopped and then rose, and dropped again and again and again. Each time the ride was shorter. Soon, an employee arrived and turned her head side up, clamped her on, and towed her up. What a ride! The sign told us the fall is 111 meters (364 feet). Nope, not even tempted a little. We enjoyed watching several other jumpers as we enjoyed the falls. 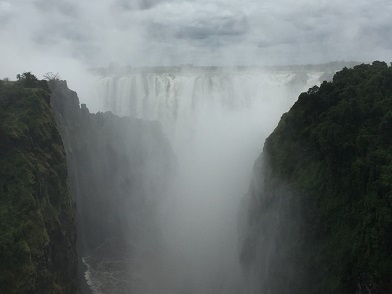 Next up, we found the entrance to Mosi-Oa-Tunya National Park. I assumed one of my favorite roles: Game Park Driver. Jana and I wandered the dirt pathways in search of animals. Many areas were flooded, keeping some animals away. We kept at it and found more and more animals: impala, zebra, guinea fowl, hornbills, bee eaters, cranes, giraffe, cape buffalo, wildebeest, and more. We did not see lions or elephants, but enjoyed seeing “old friends.” Dusk approached. It was time for dinner. 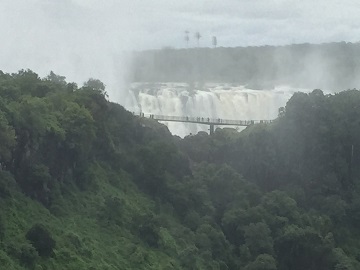 The next day, we entered a park that walked along the falls. Closer to the water, at times, we got soaked. We walked across the small “knife bridge” to the promontory. Following the winding paths, several sites allowed various views of the falls. The patterns of the water flowing down the rocks varied as minutes passed. We kept going and saw the bridge we walked the day before.
We returned often to previous locations seeing the falls in different lights. Wow! Then, we went up river watching the waters gather to roar over the edge.

Victoria Falls definitely deserves its title as a “Natural Wonder of the World.” 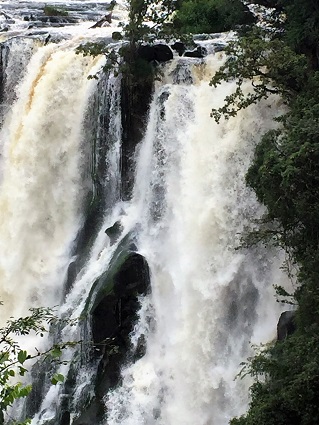 My week at the hospital was filled with many of the usual cases, but there was also a particular child with an unusual, terrible problem. A young boy, named Mazuba, had gone fishing with friends prior to school. As time for school approached, they were wading out of the river when suddenly a crocodile attacked. The monster grabbed his right thigh and knee and started to roll. A man nearby worked to save the boy. The croc released him, but grabbed the other thigh. Then somehow, suddenly, Mazuba was free. He was taken to a local hospital with multiple wounds that were cleaned.

The young boy then showed up at Beit CURE Zambia for care. Mazuba had a large defect behind his knee and multiple lacerations from the savage bites. The femur was fractured as was his tibia. The wounds were cleaned and external fixation devices applied. We continued to clean and debride the wounds. Someone much smarter than I selected an antibiotic mix to clean them. 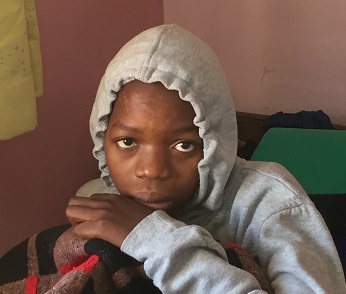 The wounds were slowly cleaned up, but the lower end of the femur thigh bone and the vessels and nerves behind the knee were not covered well with viable tissue. On a Friday, we elected to try and change that problem. A muscle was freed from one end and swung across the posterior knee. Then, a flap of skin with its fat and fascia were stolen from elsewhere and rotated to cover the defect. When tissue has been removed, of course, this leaves a hole elsewhere, but that defect is treated easily.

After some time, we checked the flap viability and the rest of the wounds. Progress! The entire flap looks healthy!!! Soon, the final defect will be covered with a skin graft. Yes, I could have covered it earlier, but I find sometimes slow is fast. His temperature has returned to normal. Blood transfusions have restored his blood counts. Mazuba’s smile occasionally appears.

Watching the body heal, I am continually amazed at how we are made. Healing, too, is a “wonder of the world” in which we live. I am very grateful for the progressive healing as the young boy, Mazuba, and I travel life in His grip.