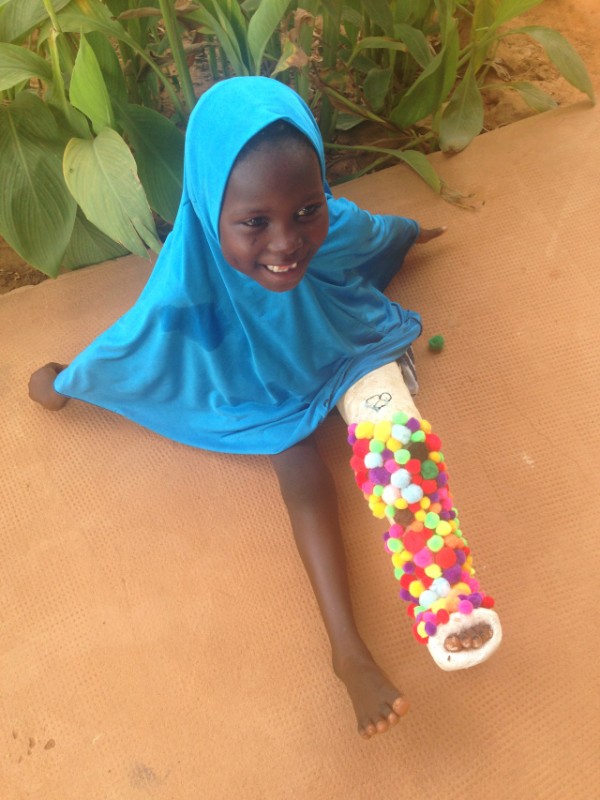 Aicha and her cast of pom-poms

I have had a lot of fun decorating casts with the kids here at the hospital over the past four years. I am constantly trying to think of new ideas for working on casts. I am always trying to do something different. The other day, I stumbled upon an idea that is different from anything I have done before – instead of painting the cast, or going over it with markers, I started gluing little pom-poms onto the cast of a little girl named Aicha. It came out nicely and I was very pleased, especially because a bunch of the kids came over and joined in. I love it when we are able to work on something like this all together, especially when it is with a kid like Aicha who is extra quiet and reserved. It focused all of the attention on Aicha, who is usually on the sidelines. She remained pretty quiet throughout but had a big smile and was giggling with the rest of the kids.

The following week, one of the girls who had helped work on Aicha’s cast, Zouera, came to the art therapy room for a session. Zouera has been at the hospital for awhile and has already gone through a number of casts, which she and I have decorated together. Many of the children who come in do not really know what they want to put on their cast, but not Zouera. She was very sure of what she wanted every time. We have done flowers, princesses, and other patterns, all at her request and under her direction.

This week, Zouera didn’t have a new cast, so the remnants of our most recent collaborative masterpiece were barely visible and the cast was covered in dirt. That is one of the realities that I have had to come to terms with – the cast decorations are, by definition, temporal. They are beautiful but they are fleeting. Sometimes they meet with the cast-cutter the day after they were created, but such is life.

We could have just painted over the older paint and dirt, but Zouera had a different idea, inspired in part by Aicha’s pom-pom cast. She wanted to cover her whole cast with glitter. Honestly, I wasn’t sure it would work that well. I imagined glitter going everywhere and getting on everything except her cast (which glitter is kind of notorious for), but I knew that we should try her idea no matter what. We doused her cast in glue (which did go everywhere and got on everything) and then poured glitter over her entire cast. The results were immediate and stunning. It seriously almost took our breath away. 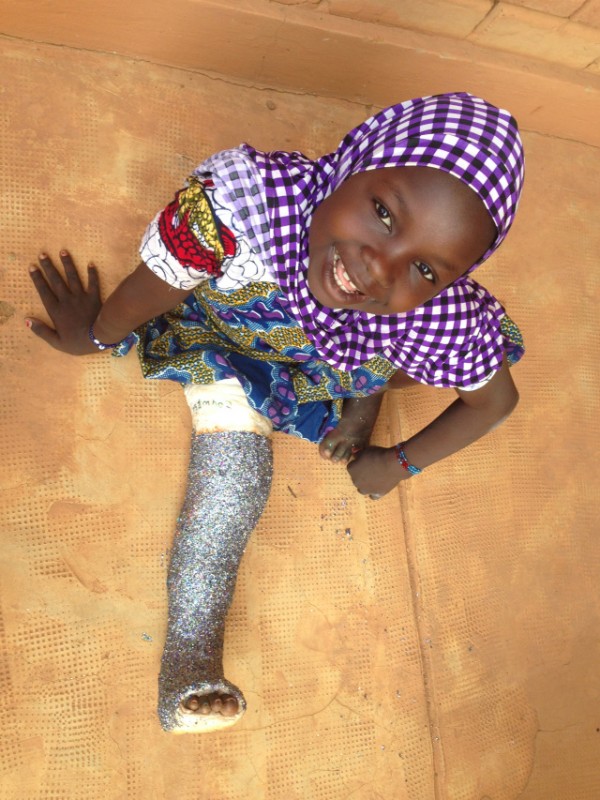 Zouera and her stunning cast of glitter

I am consistently amazed by these kids. Most of them have never done any kind of art work before. Most of them have never even held a crayon in their hand or used scissors or glue. Aside from that, most of them have not had the opportunity to explore their natural creativity because from a very young age they are helping with the cooking and cleaning and taking care of younger siblings. I am not saying that they never have a chance to play or have fun or that all the hallmarks of what the Western world considers “childhood” are missing from their lives entirely, but I am saying that they grow up quickly. They have to, especially when they are dealing with some sort of physical disability on top of everything else. Their lives, and the lives of most Nigeriens who live in remote rural areas, are all about survival, and survival does not leave much room for creativity.

That is why what Zouera did, and what so many of these kids do at the hospital, is so amazing. They are given, often for the first time in their life, the freedom and space to be creative, to be silly, to try and to fail, to dance and to sing, and to cover things in glue and glitter. This may sound like a small thing, but it is not. It is big, and it is brilliant, in every sense of the word.

These kids are full of wild and wonderful creative energy, and when they finally have the freedom and space to set it free, they shine.