News & Stories The kind of healing no surgery alone can offer

The kind of healing no surgery alone can offer The first time I met Kristian, or Kiko for short, he was in the playroom playing a video game. I’d been at CURE for a handful of months, and meeting kids with physical disabilities had started to become second nature. The shock of an unusual case had begun to wear off a bit. But even when I am surprised by something extreme, I try not to react but instead focus on the cool kid inside that just wants to be like everyone else. 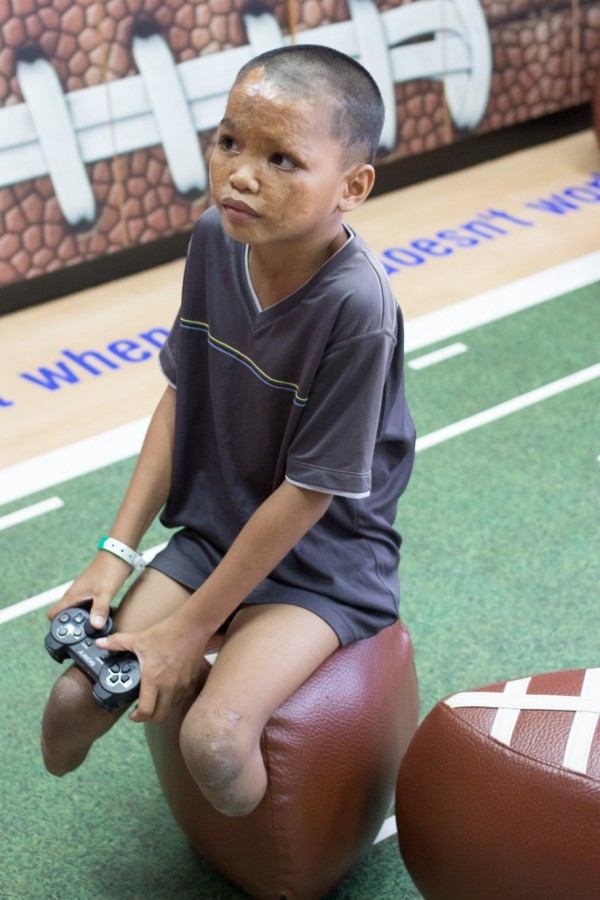 I sat down next to Kiko and said, “Hey bud! What’s up?” We briefly made eye contact, and without saying a word, he went back to gaming. That split second pierced me harder than any other introduction I’d had in the previous months. All I could see were the scars that enveloped Kiko’s face and scalp. It was painful to look at him.

Knowing that he is stared at every day of his life, I tried, maybe unsuccessfully, to act like it didn’t bother me. I asked if I could take his picture, and he reluctantly agreed. As he hopped off the chair, I realized that his legs ended just below his knees.

He gave a cute pose for his pictures, which broke the tension a bit, but I still had to retreat to my office for a few minutes to process what I had just witnessed. I was used to clubfeet, a deformed finger, an untreated broken bone. I was not used to encountering this level of disfigurement. It left me speechless. 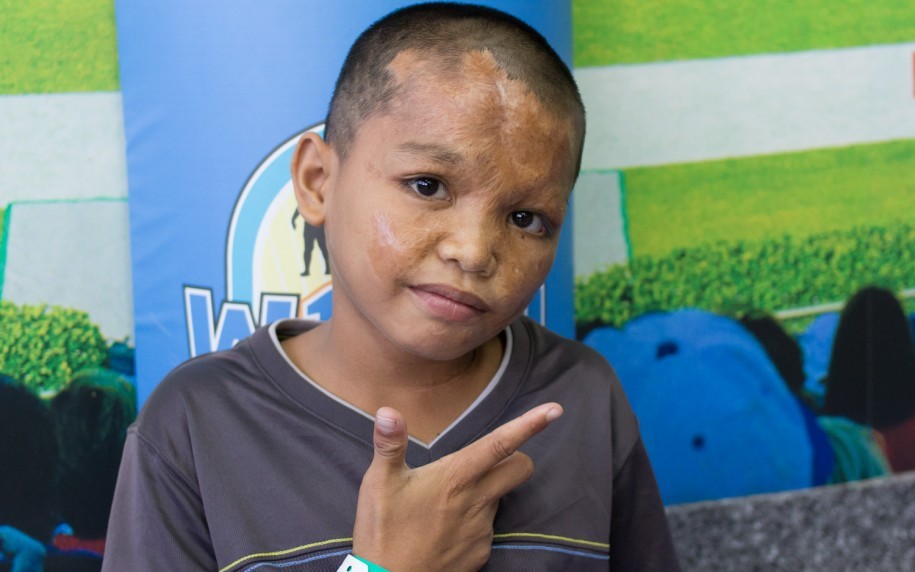 After sitting in my office telling myself, “Really? You’re afraid of a nine year old?” I went back to the playroom. There was a spiritual heaviness hanging in the air, and I was still uncomfortable and struggling to wrap my mind around the whole situation. Kiko was not interested in any interaction with anyone, so I sat with his aunt, Jessica, who has been raising him for the past several years.

She told us a story that for most of us happens in a far off place, far removed from our cozy existence. But in this case, it happened just a few hundred miles away. Nearly five years ago to the day, rebels stormed their village, set several houses on fire, and shot anyone who tried to escape. Kiko survived, but not without scars that remind him daily of the trauma he experienced. His dad also survived, but the experience affected him so severely that he was unable to continue raising Kiko.

We tend to assume that kids are quick to forgive and forget. Even though Kiko was only four years old when this horrific incident occurred, he had not forgotten, and he certainly hadn’t forgiven.

Kiko had surgery the following morning, a simple procedure on each leg to prepare him for prosthetics. He had been through countless surgeries already, and we figured the process would be routine for him. Been there, done that. But another surgery was one more than Kiko’s bruised spirit could handle. That afternoon, as he woke from his medication-induced sleep, he broke his silence, and it was startling to us all. Kids cry, that’s nothing new. There’s pain. But Kiko’s cries were not from physical pain. His wails were a broken dam of frustration, depression, and inner pain that no surgical procedure could heal. It was disturbing to experience. He was in a mental place no one should ever have to be, especially not a nine-year-old. And we couldn’t fix it. It was scary. We just had to keep loving him, even in the challenging moments, and pray that God could pour love into the deep cracks and scars that his past had created.

Over the next few days, Kiko was quiet, but jumped at every opportunity to go to the playroom and play video games. It was his sanctuary, his comfort zone. And little by little, he would interact with us, but it was still at a very long arm’s length. After he was discharged, Kiko and Jessica stayed at a nearby guesthouse, far from the tension filled island they call home. The time away provided some of the relaxation needed for healing to begin.

Things started to change. At each follow-up, we would find Kiko in the playroom, gaming away, but he would acknowledge us. We would get an occasional smile or a few words, and on a really good day, a high five! A few weeks ago, Kiko came in for his final follow-up, and a nurse from another clinic arrived with his first set of prosthetics. She taught him how to put them on, although he joked with her (yes, joked! complete with laughter!) that since she was so well practiced, she should just do it for him. Once he was fitted, he took off walking. He was a natural.

His grins got bigger, and the hugs started—big hugs, initiated by him! When it was time to say goodbye that day, we went straight to the playroom, figuring he’d be camped out in his “spot,” but he was off exploring. The boy who had been a prisoner in his body for so long was finally free. He was experiencing a total healing of mind, body, and spirit. 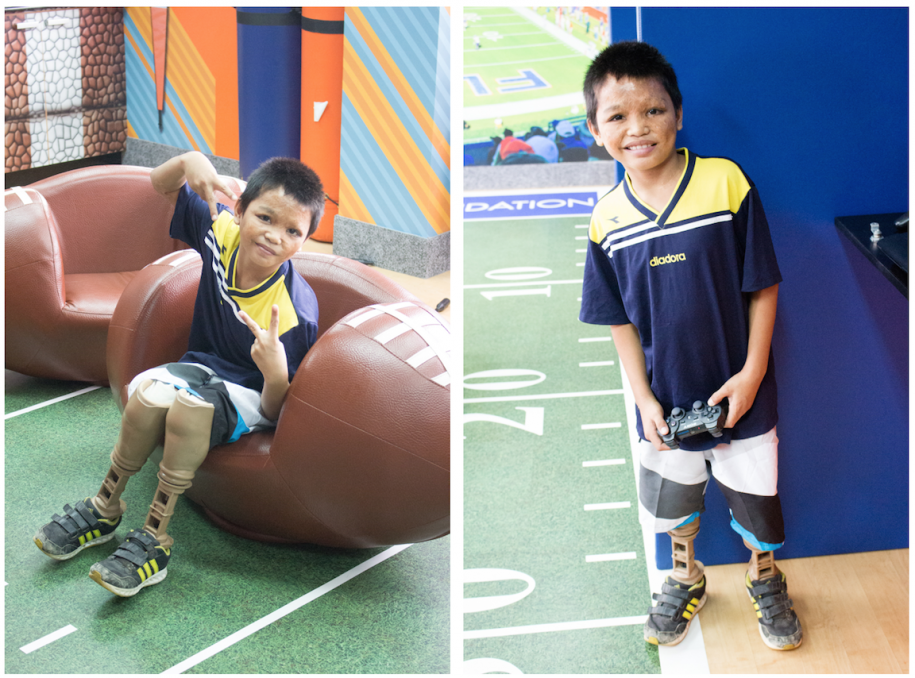 Kiko and Jessica are back home now, and like a parent letting their child leave the nest for the first time, we worry about his future. Jessica has been an amazing aunt, and we know she does everything she can to protect him from the risks of daily life there. He made huge strides while here at Tebow CURE Hospital, but will returning to such a tense environment change that?

We pray for Kiko daily. We invite you to join us, and we look forward to hearing good reports in the future!