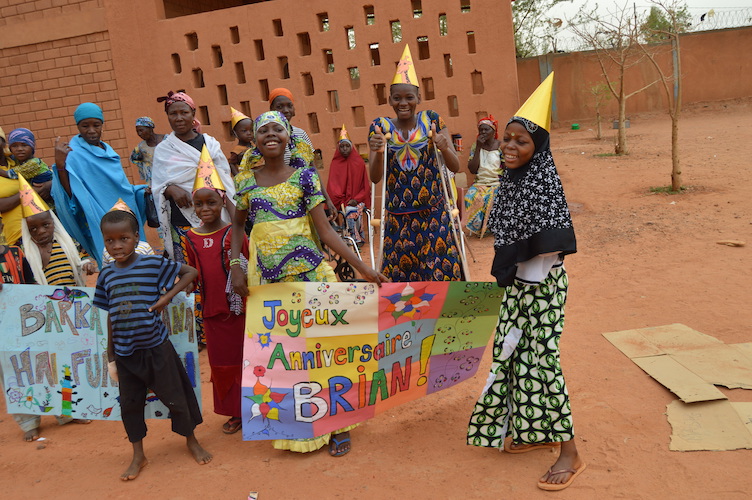 If you know Brian Van Hall, our Executive Director, you know that he LOVES surprises and LOVES being the center of attention. Just kidding. In fact, the opposite is true, but we wanted to celebrate his birthday in a very public way and acknowledge him anyway. The kids at the hospital got really excited last week when I told them about the plan to make birthday signs as a surprise for Brian. While we were working on the signs, one of the kids asked me, “Are we doing this for the director because he’s so nice?” I love that question.

I told her that’s exactly why we’re doing it. That innocent little question from one of the kids says a lot. Here in Niger, culturally it makes all the sense in the world to do something to honor the “Director” (with a capital D), no matter who he is, because he is the boss. But this child was able to see that what we were doing was different. We were not doing something for “the Director,” we were doing something for Brian. He is an amazingly skilled hospital administrator and leader, but he’s also so caring, nurturing, sensitive, and humble.

On Friday morning, before devotions, the kids (and many of the mothers) all gathered together with the signs that they made, and put on their party hats. They all marched over to the chapel, singing “Happy Birthday” in French, and burst into the chapel to surprise everyone. They were so excited about this party, and even though some paper party hats and a cake are not that big of a deal, for them, this was an event. They sat so patiently and still through the entire meeting and not one of them took off their party hats. They wore them for hours even after the party.

Once the meeting was done, we cut the cake and passed it out. Each kid got their piece of cake and maybe only two out of the entire group actually started eating it. The rest of them just sat in their chairs staring at the cake as though they had never seen cake before in their lives. Some of them probably hadn’t. They carefully wrapped up their cake in their napkin and said they were saving it for later. I don’t think you would find that anywhere else in the world – kids sitting there, cake in hand, and not eating it! I honestly think they were just so overwhelmed and excited by the whole event that they weren’t really ready or able to eat. They were so excited by the celebration that they didn’t have time to think about cake.

I strongly believe that kids are the best judge of character. They know when they’re truly loved and accepted. Brian’s revolving office door is proof that these kids feel extremely loved and accepted by him. They are constantly hanging out in his office at all times of the day. He has been nothing but loving and that is why they were so excited to celebrate him on his birthday. 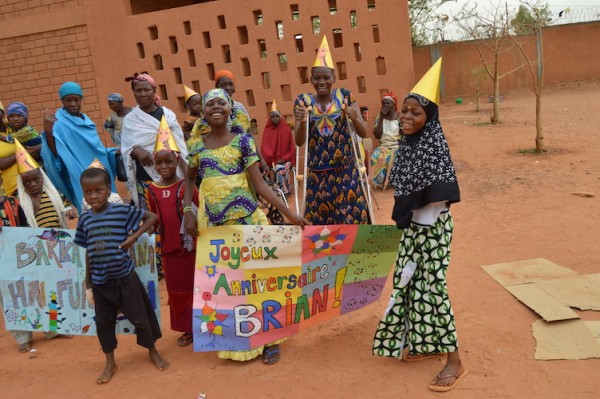 Getting ready to head to the chapel. 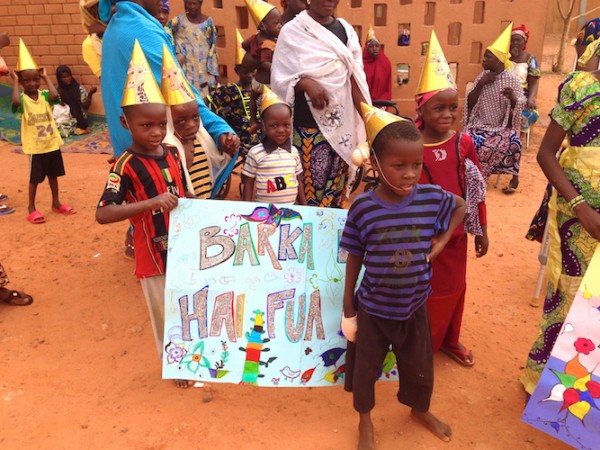 I knew my giraffe party hats (from Leon’s last birthday party) would come in handy one day! 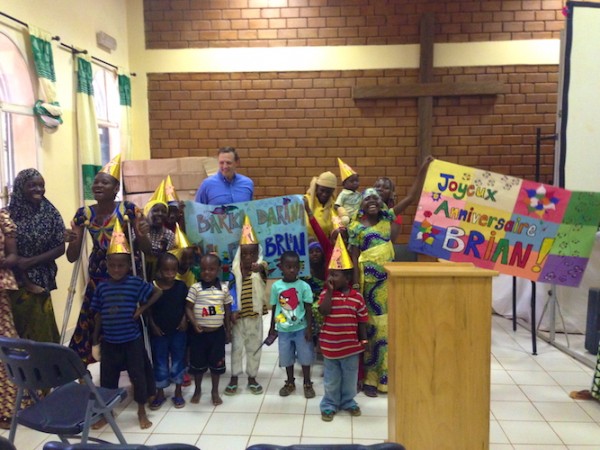 Brian loving all the extra attention! 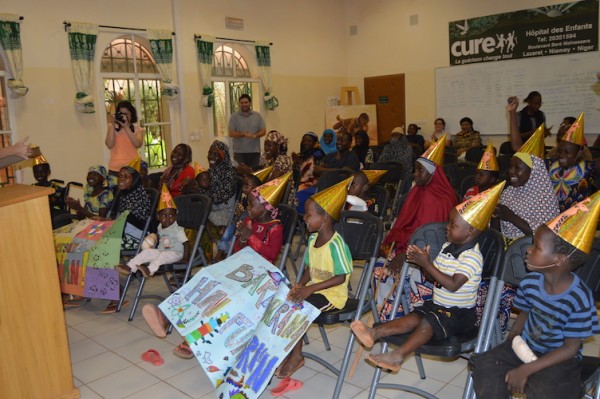 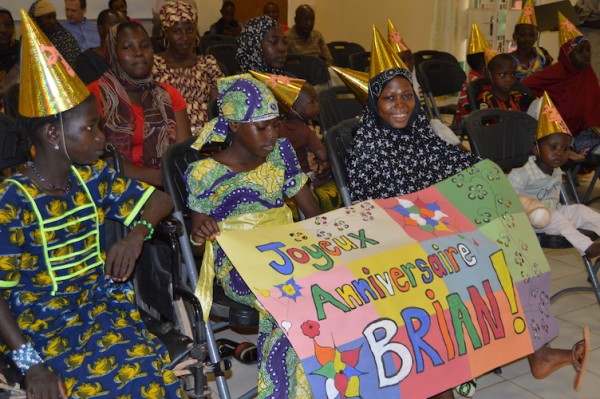 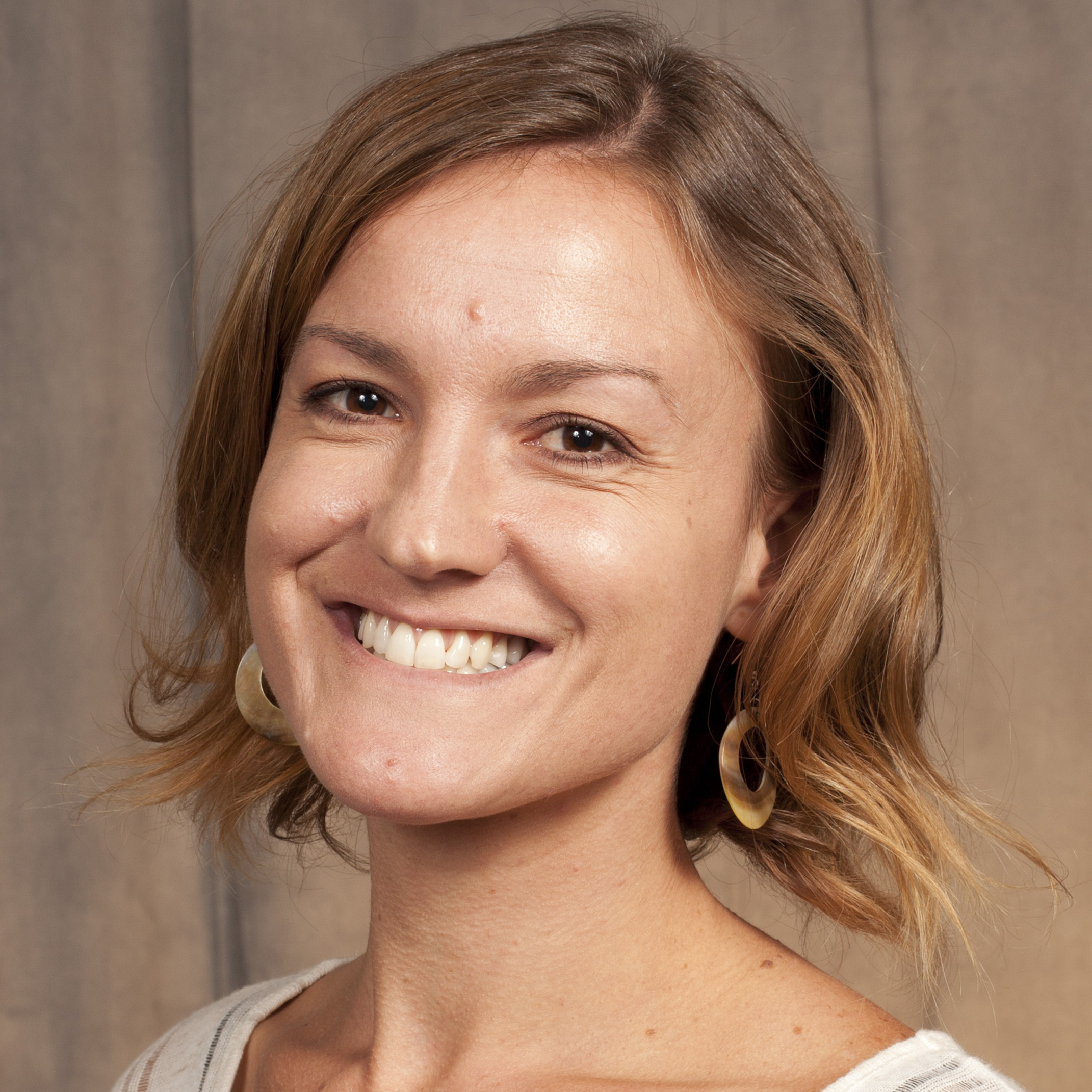