What could an accomplished neurosurgeon learn from CURE Uganda?

You might say that Dr. Rees Cosgrove, former chair of Brown University’s neurosurgery department, had a good visit to CURE Uganda.

“My experience at CURE Uganda restored my faith in the power, generosity, and goodness of the human spirit,” Dr. Cosgrove remarked.

Not a bad outcome for a week in eastern Africa. 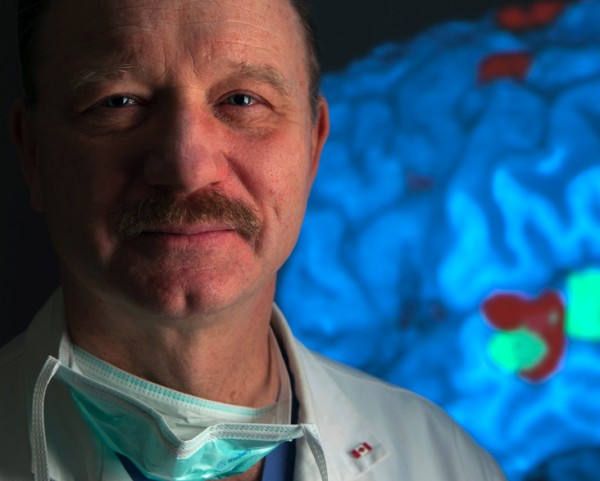 Dr. Cosgrove had always wanted to travel to Africa, so at the invitation of a colleague, he decided to spend a week volunteering at our hospital in Mbale. It didn’t take long for the trip to establish itself as a decidedly positive experience.

“On our first day, we were invited into the ‘morning devotional’ and sat quietly in our chairs while the room filled with people who worked at CURE – from nurses and cooks to secretaries and gardeners. A woman with a beautiful voice began by singing a Ugandan hymn, which was then accompanied by other voices and clapping, followed by a prayer of gratitude and Christian intention. It was a completely uplifting experience and I knew at that moment that I was in a very special place.”

Dr. Cosgrove has performed thousands of high-stakes surgeries, yet, while he was at CURE Uganda, he found himself awed by the work of his African colleagues.

“I think I’m a pretty good neurosurgeon, and to watch them, it was like, ‘Wow.’ It’s amazing what they were able to do.

“We think of Africa as this place where we go to help them, where we bring modern medical care to them. Well, the irony in this is that there are neurosurgeons now in Canada, the United States, and Europe who go there to learn from these people and this hospital.”*

What impressed him about CURE Uganda extended beyond the surgical capabilities of a surprisingly skilled hospital in the middle of eastern Uganda. It was the emotional and spiritual care that left an unexpected impression.

“What I witnessed was this incredible small hospital with the highest standards of compassionate care being administered by wonderful people. There was this wonderful sense of compassion and caring, not just from the surgeons, but from the medical team.”

The care he referred to wasn’t limited to pre- and post-op. At CURE Uganda, as is common in many CURE hospitals, prayer comes prior to surgery.

“Before you lay a knife to the skin, they would say, ‘Let’s do a timeout.’ And everybody would bow their heads, and one of the team members… would say a prayer out loud, essentially thanking God for the opportunity to care for this unfortunate child,” said Dr. Cosgrove. “This was a precious moment, and it was a spiritual moment. In the quiet, you are listening to the prayer, you realized what you were doing: you were doing an operation on a little baby… and that was such a privilege and responsibility.”*

Now that he has returned to the United States, Dr. Cosgrove is approaching his own work from a new perspective.

“I wasn’t exactly sure what to expect when I went to Uganda. I wanted to see where the greatest needs were and how I might be able to be helpful as a neurosurgeon. Of course, like many people, I received much more than I gave.

“My experience at CURE Uganda restored my faith in the power, generosity, and goodness of the human spirit. Hopefully, I can continue to carry that message with me in my own work here in the United States.”

Quotations marked with an asterisk were taken from Dr. Cosgrove’s recent interview on Humankind, which aired on select public radio stations. You can hear a portion of the interview or purchase the entire piece here.