Celebrating the New Year in Ethiopia

Our CUREkids Coordinators are CURE’s eyes and ears on the ground in our hospitals. They not only file photos and updates on each CUREkid but also act as Correspondents, giving us a glimpse of  life at the CURE hospital and in the country and culture in which the hospital serves. The following is part of the Correspondent series, filed by Stiv Twigg in Ethiopia. 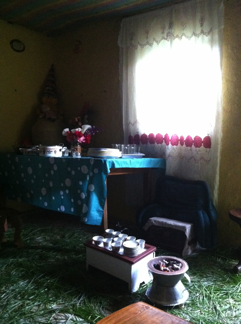 Ethiopia is home to some one of the oldest peoples in the world. They follow the Ge’ez calendar developed by Annianus of Alexandria in 9 AD, which calculates that the incarnation of Jesus Christ was approximately eight years earlier than calculated by the Gregorian calendar that most of the world follows. Thus, by their system of 12 months of 30 days each, followed by a 5-day month (or 6-day in the case of a leap year), the year is now 2006.

The New Year typically starts on September 11th, by the Gregorian Calendar. Also in the Ge’ez Calendar, every fourth year is a leap year without exception, each of the four years corresponding to one of the four apostles: John, Matthew, Mark, and then Luke. In the Gregorian Calendar, the leap year is every fourth, except when the year is divisible by 400. This pattern means that the Gregorian and Ge’ez leap years will correspond for two centuries, with the correlation ending in the year 2099 (Gregorian). Ethiopia just celebrated its New Year Holiday, complete with a day off work, lots of excitement around Addis Ababa, and much celebrating. The holiday is spent with family predominantly, eating meat, drinking wine (although not in the case of protestant Christians, who largely choose to abstain), and enjoying one another’s company. Many businesses around the city were closed for the holiday and flying the Ethiopian flag or colours of red, green, and yellow. 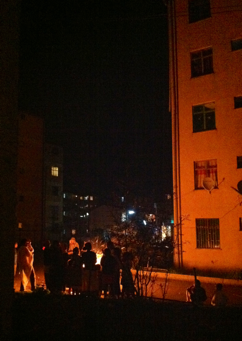 The celebrations that a family would observe, consist of eating Doro Wat, if it does not fall on a ‘fasting day’ for the Orthodox Christians of the country, which is a chicken curry dish eaten with njera, the traditional Ethiopian bread. They also enjoy tej, or honey wine, and kitfo, which is a raw meat dish.

Often they will invite their entire family to the house, and spend the afternoon talking and eating. The traditional Ethiopian coffee ceremony is always part of the afternoon, with roasting raw coffee beans and brewing the coffee inside a jebena, or traditional clay coffee pot. The coffee is usually served with a common bowl of popcorn, a cultural delicacy in Ethiopia.

The celebrations continue late into the night, and often also consist of a prayer vigil, or a gathering at the church and ceremony. The day following New Years Day is often a day that people rest from all the extravagant celebration, and, in the city at least, little happens.