What is it like when God – the Creator and Sustainer of the reality that we know – interacts powerfully in time and space? What happens? How can we know that it was God? Are there distinctive characteristics of His presence, and does He clue us into that at all?

Thankfully, we don’t have to wonder. We’re not the first people to ask this question; God graciously provides answers in the writings of the prophet Isaiah and the Gospel account of Matthew, and the answer has a lot to do with what we do at CURE.

The Setting of Isaiah’s Day

In Isaiah’s day, there was a real, life-threatening, culture-destroying need for God to show up. The Assyrian Empire, the undisputed world super power, was systematically sweeping through the ancient Near East, absorbing and destroying whole cultures with ruthless efficiency. The Northern tribes of Israel had already been conquered and dispersed, and Southern Kingdom of Judah was next. 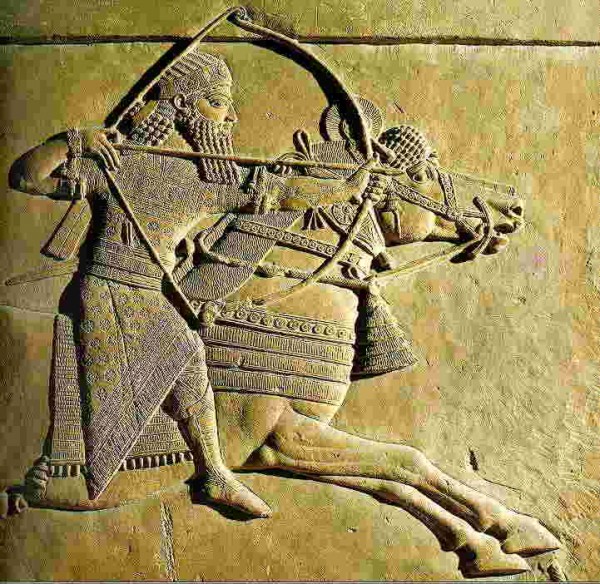 The Assyrians were not to be messed with, and everybody knew it!

Into this culture, the prophet Isaiah was commissioned by God to a very, very difficult mission. Isaiah was to call for repentance to a people that (God revealed to Isaiah) would never listen. Yet in the midst of the coming destruction (a final judgment that would come at the hand of the Babylonians 120+ years later) and amongst Isaiah’s numerous indictments on the leadership and people of Judah, God gives a promise of restoration. Judgment and punishment were coming, but God would not allow Israel to be completely destroyed (which was the fate of so many other nations that fell to Assyria).

God promised that He would show up.

Isaiah 35: A Promise in a Poem

Isaiah 35 is just such a promise. In this chapter, Isaiah records a stunning vision of God’s presence; Yahweh enters the scene and everything changes. At the center of this poem is a key and distinguishing demonstration of God’s character and values and a hallmark of what it looks like when God shows up; namely, when God shows up, human beings are restored. They are healed.

The Center is the Central Point

As we read Isaiah 35, it’s important to realize that the words of Isaiah 35 (like the vast majority of the Bible) are not only God-inspired and meant to convey truth, but – especially in their original language – they are also intentionally and beautifully constructed. These verses are a work of art and an example of a Hebrew poem that follows a chiastic structure.

A chiasm (pronounced ki-asm) is a literary device that would have been obvious, clear, and artistically appreciated by Isaiah’s original audience. In the same way that a Westerner can say, “Once upon a time,” and we immediately understand that the speaker (or author) is beginning a fairytale, so it’s the same for a chiastic structure to an ancient Hebrew audience.

For Example: The Story of Sally’s Big Day

For example, if I were to tell you about the day a girl named Sally met her future husband in a chiasm, I might write it like this:

Obviously, the most important part of the story happens in the middle. Isaiah’s audience was used to that sort of structure; and in an oral culture (where Scripture was heard as opposed to read), these literary devices were as artistically appreciated as they were structurally critical.

So what does it look like when God shows up? Here’s how Isaiah 35 begins.

These first verses set the stage for God’s arrival, and there is an expectation of joy and gladness that accompanies His presence. In the wilderness, a place that seems (as Jerusalem would someday be) dry and dead, plant life bursts forth! Isaiah references two places that were (to that audience) well-known for a luscious, life-sustaining habitat, Lebanon and Mt. Carmel, and announces that God’s presence will make the wilderness as fruitful as those places. 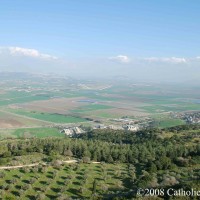 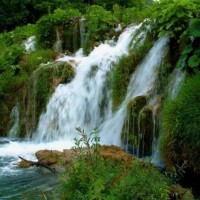 A waterfall in the Lebanon Mountains

Strengthen the feeble hands,
steady the knees that give way;
say to those with fearful hearts,
“Be strong, do not fear;
your God will come,
he will come with vengeance;
with divine retribution
he will come to save you.” – Isaiah 35:3-4

Furthermore, there is a sense that God’s presence will “set things right.” The repressed in society should take heart because Yahweh is coming, and He brings a surety of divine retribution. All wrongs will be righted.

Jumping to the end

And after God shows up, verses 8-10 show the effects of God’s arrival. Joy will overtake God’s people, and they will walk in a Way that is both protected and blessed.

And a highway will be there;
it will be called the Way of Holiness;
it will be for those who walk on that Way.
The unclean will not journey on it;
wicked fools will not go about on it.
No lion will be there,
nor any ravenous beast;
they will not be found there.
But only the redeemed will walk there,
and those the Lord has rescued will return.
They will enter Zion with singing;
everlasting joy will crown their heads.
Gladness and joy will overtake them,
and sorrow and sighing will flee away. – Isaiah 35:8-10

At the Center: Healing Matters to God

At the center of this poem is a defining characteristic of God that makes him unique amongst all the gods or religious structures of Isaiah’s day (or ours for that matter). Yahweh is the only deity of the ancient world that not only identifies Himself as “Healer” but has a stated intention to redeem and restore the world He made and the people that He created in His image.

Isaiah 35 shouts this reality with the central point of the poem. What does it look like when God shows up?

Then will the eyes of the blind be opened
and the ears of the deaf unstopped.
Then will the lame leap like a deer,
and the mute tongue shout for joy.
Water will gush forth in the wilderness
and streams in the desert.
The burning sand will become a pool,
the thirsty ground bubbling springs.
In the haunts where jackals once lay,
grass and reeds and papyrus will grow. – Isaiah 35:5-7

When God shows up, the beings that bear His image are restored, and the world He made is “rebooted.” The ears of the deaf, the eyes of the blind, the tongues of the mute, the feet of the lame: all are healed. Creation is restored; people are healed. That’s what it looks like when God arrives.

Jesus called it “the kingdom of God.”

Jesus’ response to the disciples of John the Baptist

Not surprisingly, 700 years later we see this reality lived out in Jesus’ 3.5 year ministry. Through his instructions to his disciples to heal and proclaim, through His own actions (75% of the recorded miracles in the Gospel accounts are healing miracles), and finally through His explicit declaration of His identity, we find Jesus acting as God had already shown Himself to be.

In Matthew 11, Jesus offers the definitive message of His deity to the disciples of John the Baptist. By this point in Matthew’s narrative, John the Baptist is imprisoned unjustly in a place from which he will not return, and the 1st century prophet and forerunner of the Messiah sends out trusted messengers to meet Jesus and ask a critical question, “Are you the one?” Jesus’ response speaks volumes to both his deity and His eternal inclination to heal those who bear His image:

When John, who was in prison, heard about the deeds of the Messiah, he sent his disciples to ask him, “Are you the one who is to come, or should we expect someone else?”

Jesus replied, “Go back and report to John what you hear and see: The blind receive sight, the lame walk, those who have leprosy are cleansed, the deaf hear, the dead are raised, and the good news is proclaimed to the poor. Blessed is anyone who does not stumble on account of me.” – Matthew 11:2-6

For Jesus, for John the Baptist, and for the followers of this movement to restore Israelites to right relationship with God, it is clear that Jesus’ miraculous healings are not mere contextual “do-gooding.” These acts are a direct connection to a long-understood nature of Yahweh. When the glory of the Lord shows up, Creation is restored, people are healed, life can return to a state as it was in the beginning. Just like Yahweh, Jesus has the ability and inclination to heal.

So what does it look like when God shows up? It looks like human beings, made in God’s image, being restored in every way, and it serves as a promise to the rest of Creation of God’s good intentions: He is making everything new.

It looks like healing the sick and proclaiming the kingdom of God; and that is exactly what we’re praying for today in every place CURE serves.