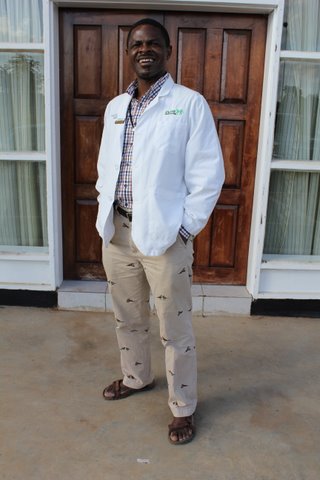 I first met Dr. Sichizya when I was being interviewed for the position I currently hold at CURE Zambia.  It was his office that I used to have my Skype chat with CURE HQ in the US.  I remember that he told me—without even witnessing my interview, mind you—that I had the job.  I thought to myself, who is this guy?  I was to find out a few short weeks later that he was the consultant neurosurgeon for the entire hospital.

Dr. Sichizya is hard to ignore, and I don’t mean this in a bad way.  He has a strong and unique personality that has given him the ability to elevate the profile of the hospital in Zambia.  He is a minor celebrity in medical circles in Zambia as he is one of the only neurosurgeons in the entire country.  He has made many appearances on local television advocating for things such as foods being fortified with folic acid and educating the public on the prevention of spina bifida and hydrocephalus.  He is also a prolific writer with one novel published and another being completed.  But to me he is most known for his guitar playing in weekly devotions and penchant for wearing bird-embroidered pants.  I affectionately call him ‘bird man.’  But I digress…

Kachinga Sichizya was born in Mufulira, in Zambia’s Copperbelt Province, in a family of ten siblings.  After spending most of his childhood dreaming of becoming a pilot, he finally decided on majoring in engineering upon graduating from David Kaunda High School in Lusaka.  While studying engineering at the University of Zambia, Dr. Sichizya took up the sport of boxing, at which he excelled.  “I was the top boxer at the university, and I was about to fight at the national championship level,” said Dr. Sichizya.  Unfortunately, his studies suffered as a result of his devout focus on boxing.  Instead of giving up on school, however, he decided to drop engineering and switch to medicine.  It turns out that medicine was the right fit.  He completed his bachelor’s degree in human biology and then matriculated on to medical school at the University of Zambia, where he graduated as an MD in 1994.

Next up was the University of Cape Town, where Dr. Sichizya studied for six years for a fellowship of neurosurgery.  In addition to this fellowship, Dr. Sichizya has a number of pediatric neurosurgery and spinal fellowships and attachments from all over the globe, including the United Kingdom, Uganda, and the Hershey Medical School at the University of Pennsylvania.  With such a heavyweight resume, one would think that Dr. Sichizya was ready to go to the West and use his skills to earn a hefty salary at one of the top hospital in North America and/or Europe.  In fact, in 2005, after finishing up his fellowship studies at the University of Cape Town, he was offered prime positions in New Zealand and Australia, but to everyone’s surprise, he turned them down.  “I wanted to go home,” said Sichizya pensively, “I wanted to use the training I had gained to practice medicine on my people — the people who needed my help most.”

With the determination to hone his skills as a neurosurgeon on home turf, Dr. Sichizya got in contact with one of his colleagues in Mbale, Uganda, who mentioned to him that a fledgling American organization called CURE International was opening a hospital in Zambia.  “I got really excited because I’d heard about this CURE International. I knew that their hospitals had an excellent reputation, and it would be an opportunity to practice cutting edge medicine at a hospital with international standards, “ said Dr. Sichizya.  So in 2006, as bricks were being laid for the current CURE Zambia edifice, Dr. Sichizya interviewed with Peter Kyalo, CURE Zambia’s executive director—and the rest, as they say, is history!

“The neurological and spinal cases we see at this hospital range from cancerous brain tumors to hydrocephalus to spina bifida,” says Sichizya.  “Right now we are looking into treating and performing operations to cure brain aneurysms.”  As cheerful as Dr. Sichizya is to work at CURE, he has noted serious problems with the health care system in Zambia.  He told me that because of the fact that there are so few expertly trained neurosurgeons in the country, he sees many patients who have been misdiagnosed for years.  “I get patients who will complain of having terrible, painful headaches for years only to find out that they were suffering from deadly brain tumors from the beginning.  It’s incredibly frustrating,” lamented Dr. Sichizya.  Dr. Sichizya has also expanded his cause to advocate for folic acid fortification in Zambian staple foods, as it has been proven that lack of folic acid is one of the primary reasons for babies being born with spina bifida.

Despite the frustrations, however, Dr. Sichizya loves his job immensely.  “I give my patients all of my heart—I give them my all.  Because of this, I go home very happy!”  Dr. Sichizya is not afraid to say to everyone how proud he is that his department has gone four months without any infections!

It’s hard to imagine that with Dr. Sichizya’s busy schedule he is able to find time for his family and hobbies, but I was amazed when he told me that he is a published author!  Dr. Sichizya has authored a fictional novel entitled Uneasy Yoke, which won fiction awards across Zambia and is currently studied in the 11th and 12th grade literature in Zambian schools.  Dr. Sichizya is also and avid runner and has run half marathons across the globe.  He climbed Mt. Kilimanjaro to raise funds for incubators for CURE Zambia.  He is the husband to Veronica, the head of radiology at Lusaka’s University Teaching Hospital, and father of three children.

Most of all Dr. Sichizya enjoys ministering everywhere he goes.  “I love working at CURE Zambia because I’m able to go with my guitar and sing with patients and minister to them without being worried about who is watching me.”  CURE Zambia is incredibly fortunate and blessed to have Dr. Kachinga Sichizya on our team!