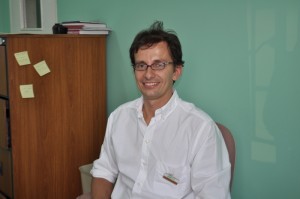 Dr. Giorgio Lastroni is the only doctor at Beit CURE whom I hadn’t formally met until yesterday.  I had seen him many times, bouncing in and out of his office or quickly making his way to the operating theatre.

He definitely seems to be the most elusive doctor at Beit CURE, but probably one of the most cheerful members of our medical staff.  Dr. Lastroni agreed to meet me yesterday for a short chat at 3 o’clock, unfortunately he was 30 minutes late.  His reason: He was checking on a patient who had just walked in.  Normally I would have been somewhat annoyed, but he was so happy and excited that I could do nothing but forgive him.

Dr. Giorgio Lastroni was born in Bergamo, Italy—a city about 50 kilometers outside of Milan.  He told me that as a child he wanted to become a doctor because it was a career that would allow him to work anywhere in the world.  However, as a teenager his focus changed.  He decided that he wanted to become…a rock star!

“In my teens I was much more interested in playing electric guitar than focusing on my studies,” said Dr. Lastroni sheepishly. “When I finished high school, I applied to university, choosing to either major in economics, engineering or medicine.  I gave priority to medicine.”

So, Dr. Lastroni reluctantly put his electric guitar and rock star aspirations to bed and enrolled at the University of Milan to study medicine for the next seven years.  While studying generic medicine at that university, Dr. Lastroni realized that his passion was in orthopedics.  After taking a year off for military service, he enrolled at the Gaetano Pini Institute for Orthopedics, where he graduated in 2003.

In 2000, Dr. Lastroni decided to take a vacation to Uganda.  As it turned out, this vacation ended up becoming epic as Dr. Lastroni made connections with people that would later lead him on the path to his future employment at Beit CURE Hospital.

“While I was in Uganda, I was able to organize a three-month fellowship with a Canadian doctor named Norgrove Peni, who just happened to be one of the only doctors practicing the Ponseti Method for correcting clubfeet,” he said.

During his three-month fellowship with Dr. Peni, he met Chris Lavy who was, at the time, setting up the Beit CURE International Hospital in Blantyre, Malawi. He also met Dr. Jim Harrison—the current medical director at the CURE Malawi hospital.

After completing his fellowship, Dr. Lastroni and his wife, Barbara, returned to Italy.  His time in Italy was to be temporary as he and his wife were not happy staying there and were becoming bored with the lifestyle of the country.  In 2009, Barbara got an opportunity to work in Zambia, and Dr. Lastroni quickly got in touch with Dr. Malcolm Swann, the former medical director of Beit CURE Hospital in Lusaka.

“He told me to come to the hospital—as a volunteer at first, but I was still happy to do it!”  Dr. Lastroni said.

Dr. Swann left Beit CURE Hospital this year, leaving Dr. Lastroni as the facility’s new medical director.  “Beit CURE is like a paradise for me, and the work is so rewarding,” beamed Dr. Lastroni. “I’m able to handle cases that I would never see in Italy and treat people who really need it and appreciate it.  The staff is truly committed and wonderful to work with.  I’m very happy here.”

When I asked what Dr. Lastroni’s hobbies were, he said “my son Giuliano, who is 4 years old.”  He also likes to travel with his family.

He added, “I still am very much a fanatic of the electric guitar.  I have one electric guitar, an acoustic guitar and an amplifier, so I’m very equipped for rock stardom.”

I asked him if he was any good, and he admitted that he was “horrible.”  Many Beit CURE staff and patients can breathe a sigh of relief that Dr. Lastroni will definitely be sticking to his day job.